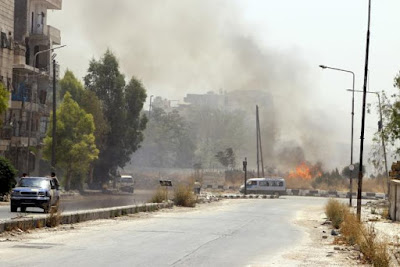 The ceasefire halted fighting in the rebel-held town of Zabadani between the insurgents on one hand and the Quds Force, the Lebanese Hezbollah, and Syrian army on the other. The truce also involves a pair of Alawite villages still controlled by the regime in Idlib countryside, al-Foua and Kefraya. The ceasefire could be extended to give time for ongoing negotiations aimed at evacuating civilians and combatants. (Reuters, 12 August)

Zabadani is about 45 km (30 miles) northwest of Damascus and has been the focus of a weeks-long ferocious fighting between Iran-led coalition forces and the Syrian opposition.

Meanwhile, the Iranian Foreign Minister Javad Zarif is in Damascus today to discuss Iran’s plans to end the seemingly unending conflict now at its fifth year.

This is good news.The islamic theocracy is incapable in halting the Syrian uprising against Assad and his brutal regime.They are in the process of losing Syria which will lead to their lose of Lebanon.Once Syria is lost the Hezbollah supply lines will be halted on land.The lebanese then can resist Hezbollah's terrorist activities without hindrance by islamic regime.They can stop any supplies coming through by sea and air once Syria is free from Assad and islamic theocracy.They are desperate now.

I thought the negotiations were directly between Iran and the Army of Conquest.

I think you misunderstood.Islamic occupying theocracy in Iran came 36 years before ISIS and Al Nusra Front.Islamic fascist theocracy made the blue prints for other islamic terrorist organizations.Saudi Arabia is the mother of islamic ideology and the islamic regime is the follower of such a ideology. Shia or Sunni they both come from the same source in Arabia.