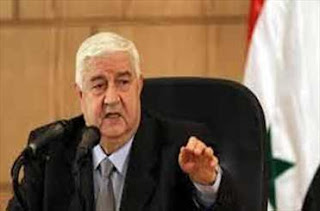 Syrian Foreign Minister Walid al-Moualem arrived in Tehran on Tuesday to attend a trilateral meeting with the Iranian officials and Russia’s visiting special envoy. Moualem’s visit comes at a critical time for the Assad regime. After more than four years of intense fighting, Syria is practically disintegrated, portioned into areas of influence of the regime, the Islamic State, and various opposition groups. Assad is mainly in control of Damascus-Latakia corridor, less than 20 percent of what used to be Syria, with the opposition closing in on Latakia.

Iran’s support of Assad’s regime has been a key factor for its survival. A coalition of Lebanese Hezbollah and Afghan, Pakistani and Iraqi Shia militias under the command of Iran’s Quds Force have taken up the fight against the opposition at a time when the morale in the Syrian army and the government’s national guard (the NDF) must be at its lowest after suffering a string of losses to the opposition this year. The Quds Force role in the fight, coupled with tens of billions of Iranian and Russian economic and military aid to Assad, has prevented the collapse of the regime.

Discussions in Tehran on the future of the war in Syria could be very intense. Assad does not have many options left and last week all but conceded to a de facto partition of the country when he said publicly that his army could not fight everywhere and needed to focus on areas of crucial importance to the regime. Iran and Russia, at least for now, seem to have doubled down on Assad's chances of defeating the opposition and will probably push Moualem to turn around the situation on the ground, the worst for Assad since the start of the civil war in 2011.

With respect, "areas of influence of the regime, the Islamic State, and various opposition groups"

"areas of influence of the regime, al-Qaeda, the Islamic State, and various opposition groups"

The news this week is that al-Qaeda is putting the hurt on our U.S. vetted and trained fighters inside Syria.

I don't think the Russians and Irans are "doubling down" on the Syrian Arab Republic defeating the Islamic State, al-Qaeda and various armed groups. Rather, a more realistic strategy is continuation of support, while espousing a political solution that includes current top ranking political figures of the Syrian Arab Republic (which was part of today's announcement following discussions in Tehran).

Okay, I'm lost. After the fall of Idlib how much of Syria does Assad still control?

It appears that powers to be have wagered against the survival of Assad's regime . and no amount of Iranian and Russian support can reverse the tide ( Iran and Russia were never reliable supporters anyway and their aid at best could be described as puny and pathetic ).Under normal set of circumstances , one would have welcomed a political change considering the reprehensible nature and conduct of Syrian regime in the past .However with those ISIL and Nusra savages committing atrocities and unspeakable crimes , a decent political settlement may be too much to hope for right now .The fate of the Druze , Alawite , Christian and moderate Sunni communities in Syria hinges on creation of a de facto safe haven in the western part of Syria compromising perhaps 25-40% of its current land mass .Essentially our role in Syria has been limited to combating terrorism and preventing humanitarian catastrophe .

Probably around 20%, mainly Damascus and the Latakia coast and the corridor connecting the two, plus pockets elsewhere. But the majority of the population live in that Damascus-Latakia region, and that's where Assad is concentrating his defenses.

Agreed, the Qaeda affiliate, al-Nusra, is the most prominent non-ISIL group in the country. Different parts of Syria are being controlled by the regime, the Islamic State, the Kurds, Al Nusra-led coalition, and some two dozens other smaller opposition groups. The regime mainly fights against the opposition and al-Nusra. The opposition and al-Nusra fight against the regime and ISIL. And ISIL mainly fights against the Kurds and the opposition. And the Kurds against ISIL. This is not the case of splitting of the country into 2 or 3 parts, but its disintegration into many fiefdoms.

The Syrian regime has always given lip service to the necessity of a "political" solution, while dropping barrel bombs on areas controlled by forces that need to be part of that political solution. Russia regularly invites non-consequential groups to Moscow to discuss a political solution; instead it needs to apply real pressure on the regime to sit with the main opposition forces if it wants to see an end to this conflict. I do not see Iran ready yet to apply any type of pressure on Assad for a political settlement. Iran and the Hezbollah probably believe that by adding more militias and military advisers and military hardware they could still pull off a victory for Assad.

This war could go on for sometime, with balance of power among many different warring parties changing constantly. All parties still hope for a military victory which has alluded them so far, and with that type of mentality no one is ready yet to take political settlement of the war seriously.

He can smell free money! First flight to Tehran with his broken begging bowl.Fake anti western regime in Tehran will gladly give away Iranian peoples money to any tin pot country that purports to fight "zionism" or has anti US agenda.US and western powers are happy to have fake anti western regime in Tehran so to boost arms sales to persian gulf countries. Win win situation for western powers.Wake up Iranian people.