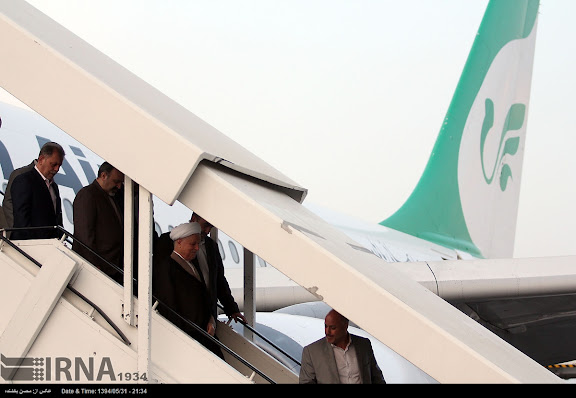 The current Chairman of Expediency Discernment Council is seen being received by officials including an Artesh brigadier general 2C. 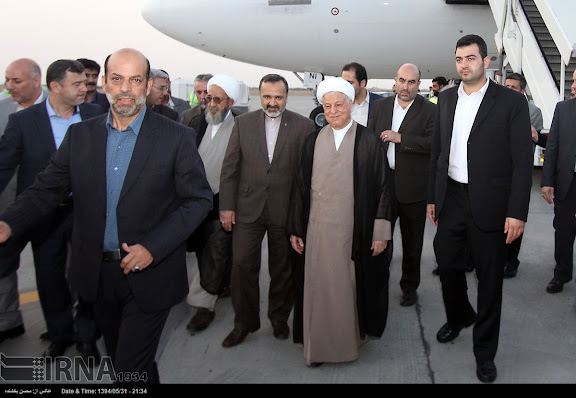 On 03AUG15 Ayatollah Hashemi Rafsanjani officially announced his intention to run for re-election to the Assembly of Experts in February 2016, prompting backlash from the more conservative establishment. [see HERE]

A political moderate, the former President of Iran supports the Rouhani administration and its signing of the JCPOA.

I guess Mr. Rafsanjani is in holy city of Mash-had to pray for prompt and speedy release of his son from prison .The treatment and subsequent imprisonment of two of Hashemi Rafsanjani's children by Iranian authorities allegedly for bribery , tells volumes about internal machination of Iranian politics . For those who can remember , it was Hashemi Rafsanjani who played a crucial and instrumental role in electing then Hojat-al-Islam Ali Khamenei as the new supreme leader following the death of Ayatollah Khomeini in those tumultuous and uncertain days .Despite some doubts about his religious credentials by many senior clerics of the time , Mr. Khamenei was eventually chosen to become the new supreme leader largely thanks to Mr. Rafsanjani's around the clock efforts and persuasion of senior revolutionary figures .Ironically ,at the end Mr. Khamenei chose not to lift a finger to help an old friend and intervene on behalf of his children .
Theocracy or otherwise , back stabbing and treachery is parts and parcel of politics in that part of the world for a long time .