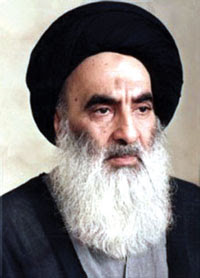 Grand Ayatollah Ali al-Sistani, the spiritual leader of Iraqi Shias, warned on Thursday that Iraq could face “partition” and other dire consequences if real reform is not carried out.

“Today, if true reform is not realized by fighting corruption without mercy and realizing social justice on different levels, it is expected that circumstances will become worst that before, Sistani said in a written statement. “(Iraq) could be dragged to… partition and the like, God forbid.” (AFP, 20 August)

Without rampant corruption, especially in the security forces, and misuse of power by top officials, “the Daesh terrorist organization would not have been able to control a large part of the territory of Iraq,” Sistani added, using an Arabic acronym for ISIL.

Many Iraqi politicians, Sistani said, “did not take the overall interests of the Iraqi people into consideration, and were instead concerned with their personal interests, and factional, sectarian and ethnic concerns.” (AFP, 20 August)

Even with popular support and Grand Ayatollah Sistani’s backing, the entrenched nature of corruption and the fact parties across the political spectrum benefit from it make changes recently proposed by Prime Minister Abadi extremely difficult, AFP said.

From Tehran, ISCI President Hakim praised Sistani's fatwa and the creation of PMF which he states was helped by Iran, specifically identifying IRGC-QF Commander Soleimani for his role in "Iraq's recovery."

I would point out that many of Abadi's reforms, while praiseworthy for what they seek to achieve, are in method extralegal. This presents constitutional problems or obstacles, on their own. Here's a good rundown: