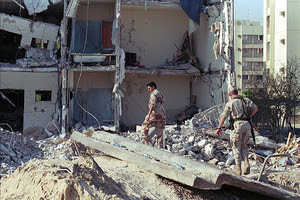 Mughassil has been indicted by a U.S. court as being the architect of the truck bomb attack that devastated the towers at a U.S. military base in Dhahran, killing 19 U.S. servicemen and injuring 372 people in June 1996. It was the deadliest blast against U.S. troops since the 1983 U.S. Marine barracks bombing in Beirut.

Mughassil was the military commander of Saudi Hezbollah, an Iranian Quds Force-backed extremist organization believed to be behind the attack. If confirmed, his arrest and extradition to Saudi Arabia would be a coup for the Saudi government and could be a disaster for Iran and the Quds Force if Mughassil cooperates with the authorities. The FBI had offered $5 million for his capture. Ash Sahrq al-Awsat said Mughassil has been sent to a U.S. military base in Saudi Arabia.

The Associated Press quoted an unidentified Saudi official as saying Mughassil, a Shia from Qatif in eastern Saudi Arabia, was arrested two weeks ago in Beirut after having arrived from Iran. He was attempting to reach the Hezbollah-dominated southern suburbs of Beirut when he was detained, the official told AP.

Matt Levitt, a counter-terrorism and intelligence expert at the Washington Institute, told CSM that Mughassil was living in Beirut prior to the 1996 attack and ran the Khobar operation from there. (Christian Science Monitor, 27 August)

Iran is reportedly the principal backer of Saudi Hezbollah, also known as Hezbollah al-Hijaz, as well as its powerful Lebanese counterpart. A 2001 federal indictment accused Mughassil and 12 other Saudi Hezbollah members of carring out the Khobar bombing. The indictment also provided details of the alleged links between Iran and the Saudi and Lebanese Hezbollah.

Iran has always denied any involvement in the Khobar Towers bombing.

File photo: A Saudi and a U.S. serviceman (r.) walk through the rubble in front of the Khobar Towers housing complex at a U.S. military base in Dhahran. 19 U.S. servicemen were killed when a truck bomb devastated the towers in June 1996. (Greg Marinovich/AP)
Posted by Nader Uskowi at 5:00 AM

To get to the truth , there need to be a credible interrogation of this suspect , preferably outside of Middle East .Needless to say ,this is a very high stake investigation

nteresting timing of the arrest.

There exists evidence that the Khobar bombing was an al-Qaeda operation. That was the also the position of IRI President Khatami, citing the conclusion of Iranian intelligence. At the time there was a push toward improving relations with the United States, which Khatami later espoused as president but which was undermined by blame--misdirected, according to Khatami--towards Iran.

There exists evidence that the FBI investigation and USG ruling on the matter was heavily influenced by the direction of KSA security, that under no circumstances wanted blame directed at KSA domestic sources.

So here we have an impending vote on JCPOA, a protracted Yemen conflict, and now an arrest of an alleged Iran-tied suspect to the Khobar bombing.

Possibility this is spurious.

Frankly I don't think that Iranian government would be that foolish to orchestrate a terrorist act against U.S. Any such act would have the most dire of consequences for them which could put the very survival of the regime in serious jeopardy .

The alleged mastermind of one of the biggest terrorist acts against U.S. troops is arrested, this is good news irrespective of JCPOA. Are you saying the timing of his travel to Beirut and his arrest and transfer to Saudi Arabia was all organized by the opponents of JCPOA? That would be a bit of stretch even in conspiracy theory circles. Or are you saying that after his arrest, the opponents of JCPOA pushed out the news? But why did they wait two weeks to do so?

JCPOA will be passed in the U.S., most probably through a presidential veto and inability of its opponents to override the veto. This arrest will not significantly change that outcome. Let's concentrate on the crime allegedly committed by Mughassil and let's hope the courts would reveal who were his accomplices and backers. Those questions will not be addressed anytime soon, well after JCPOA's fate is known.

On Twitter, in response to this post, a commentator says: "May be Iran gave him up as part of the deal."
And question remains why the Iranians let him travel to Beirut at this particular time?

Nader you are on a good way...why now? Of course it's a arrangement. The saudis have nothing to do with this deal. Unfortunately the regime and rahbar agreed on it. That's also the reason why all iranian military guys are against the deal with the west. Because they don't want such compromises in the agreement with the west. The only score for Iran is that the us will not blame it on Iran.

Yea, it could be part of JCPOA...also how houthis coincidentally started withdrawing from Aden and Tiaz after signing of the nuclear deal. Nothing like a convenient coincidence! trust me.

Who the culprit behind Khobar has changed so many times, depending on who is the enemy du jour since this happened. I remember I was a teenager when it happened and they blamed Iran. Then after the USS cole, they said it was bin laden. Then after that back to Iran until 911, which it became Bin laden again whe they wanted to bomb afghanistan. Back and forth like a tennis ball.

Needless to say, they keep switching the guilt to whoever it is convenient to blame at the moment

I hope you are not suggesting that Kobar residents blew up the building in a mass suicide! Of course terrorists were involved, and the involvement of the Saudi Hezbollah could be a real possibility. After all, wasn’t the Lebanese Hezbollah, the parent organization, involved in the Beirut bombings that killed hundreds of U.S. and French servicemen? BTW, Al Qaeda did not exist in early 80s and could not possibly be involved in Beirut bombings. Also the question remains, why was Mr. Mughassil living in Iran? He could not be part of Al Qaeda, could he?