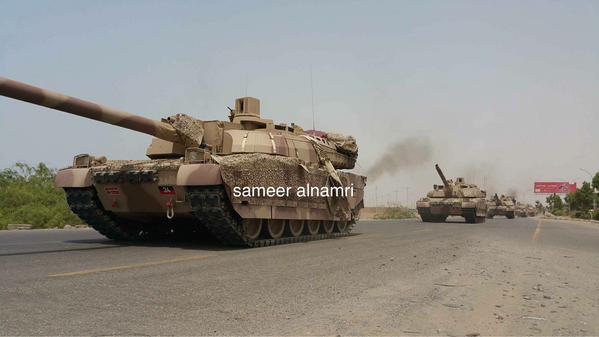 Pro-government Popular Resistance fighters, supported by UAE armored units and troops and Saudi-led airstrikes, recaptured Al-Anad airbase, the country largest military base, after heavy combat with Houthi insurgents who had taken the base earlier this year, Reuters quoting a government commander, reported today.

The recapture of Al-Anad provides a strategic base of operation for the Arab coalition and opens up the road north to the city of Taiz, Yemen’s third largest, where Houthi insurgents and pro-government fighters have been locked in combat.

Earlier today, images posted on the Twitter showed a column of UAE’s LeClerc main battle tanks and BMP armored vehicles, including M-ATVs, deployed in a port in Aden and heading toward Al-Anad. There were also reports of 3,000 Arab coalitions troops deployed in Aden today.

Photo credit: Image posted on Twitter showing a column of UAE tanks heading toward Al-Anad military base after being deployed in a port in Aden (Twitter/@saikhamk, 3 August)

I wonder of this means that with more deployment in the future, they can actually reach San'aa and finally defeat the Houthis.

Iran ought to deploy its own troops to Yemen... defend the Houthis and liberate the country. Not right leaving the Houthis hanging by a thread. Letting their dreams be crushed is shameful

Even if the saudis and co manage to occupy the population centers,and that is a very big if by the way, that doesnt mean the defeat of the houthis it simply means that the war becomes a long grinding war of attrition against the occupying forces who are now tied down occupying and defending the territory they have captured/occupied,it looks to me as tho` the saudis and co are not very,very careful they could well be headed for a syria of their very own which would be a delicious irony.As the old saying goes:this aint over yet,not by a long shot.

Why should Iranians die for another foreign cause? As far as one is concerned that is their "dreams" not ours.We have our own dreams to consider because to us Iran comes first.