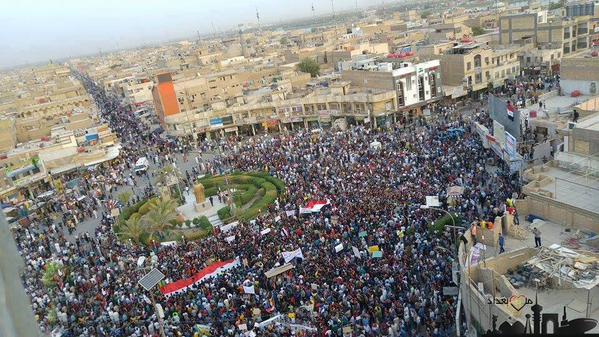 Tens of thousands of Iraqis demonstrated in Baghdad, Basra and several other southern cities on Friday to protest the financial and administrative corruption rampant in Iraqi ministries and lack of the basic services, like the electricity, as the temperatures exceeded 50 degrees Celsius (122 Fahrenheit), The Middle East Eye reported.

Today’s demonstrations, the second Friday of protests, took place hours after Grand Ayatollah Ali al-Sistani, the spiritual leader of the Iraqi Shias, called on Iraqi prime minister to fight corruption and launch a campaign to reform the government.

“The country is facing complicated economic problems and a tremendous lack of services. All of this is a result of financial and administrative corruption which has existed in various governmental departments and institutions for years,” said Ahmad al-Safy, Sistani’s representative in a televised Friday prayer from Karbala. (Middle East Eye, 7 August)

“The prime minister is the top executive official of the counry… He is supposed to show more courage and resolve in regards to steps toward reformation… He must hit with an iron fist whoever is tampering with public money, and work to end unaccepted privileges which are granted to our officials,” Safy added.

In Baghdad, security was very tight and the roads that led to demonstration site were blocked for miles, while anti-riot police was deployed on every street corner near the protests who gathered in central Baghdad’s Tahrir Square.

Is the ban on ex baath party members holding government or military positions, I believe first imposed by the Americans, still in place?

All the officials of the country, from Sadrists to Malikists to Hakimists, are declaring their supports for the protests. Makes you wonder who the people are protesting against!

Next thing you know, we're gonna have Abu-bakr Albaghdadi declaring his support for the protests too!

Shame on Iraqi authorities. For the past years they've exported more oil than Iran, and yet they can't even manage to get the electricity to work.

I believe the original de-baathification law was rescinded in mid-2004 as part of transfer of power from CPA to Iraqi authorities. But Iraqi parliament later put into effect a revised de-baathification policy, easing some provisions but maintaining the main architecture of the original policy. Iraq needs a true reconciliation legislature to end that unfortunate chapter in its history.

Now I don't suppose that includes reconciliation with Bathists? Is that what Iraq needs?

The de-baathification policy has beed used indiscriminately against Sunni officials and government workers , even if they did not hold any position of national power. One of the reasons for lack of basic services was the wholesome firing of so many technical staff under the guise of de-baathification and replacing them with non-competent corrupt individuals, some actually buying their positions in order to extract even more bribes later. That was also true in the military. So many competent senior officers were fired and replaced by so-called generals who were more concerned about collecting salaries of phantom soldiers than preparing real soldiers to defend the country.

Yes of course, you're right. The policy has been abused and exploited by corrupt officials who cared more about loyalty and money than competence and professionalism. That includes ex prime minister Maliki.

Reforming the de-bathification policy is the answer, however, and not abandoning it.

However, what if the "competent" army officers are former Bathists? Do you think Iraq should employ them instead of, say, putting them under trial?

In Iran's own experience, the Islamic Republic in its first year of existence had to bring out many of the jailed officers of the Iranian Imperial Army and Air Force to fight against Saddam. And they fought bravely for the motherland, some giving their lives months after being freed from prison. The experience points to the necessity of differentiating between few officers with senior national responsibilities, who could have been retired, and the bulk of the officers' corp, including general officers.

I disagree with the notion that the de-Baathification program somehow deprived Iraq of its competent military officers . Let's once and for all , absolve ourselves of that fallacy : Iraq didn't have any competent military cadre . Iraq's high ranking officers at the time of the Operation Iraqi Freedom were nothing but a bunch of war criminals .Indeed Iraq's relative success in its war against Iran and the Kurds was entirely due to indiscriminate use of chemical and poison gas weapons .: And Iraq suffered one of the most lopsided defeats in modern warfare history during operations Desert Storm and Iraqi Freedom . The de-Baathification was aimed at the rank and file Baathist army officers who had been laying the ground work for an insurgency long before the invasion of Iraq . Those were the elements who has sworn loyalty to Saddam Hussain and had no interest in seeing Iraq free from Baathi tyranny .