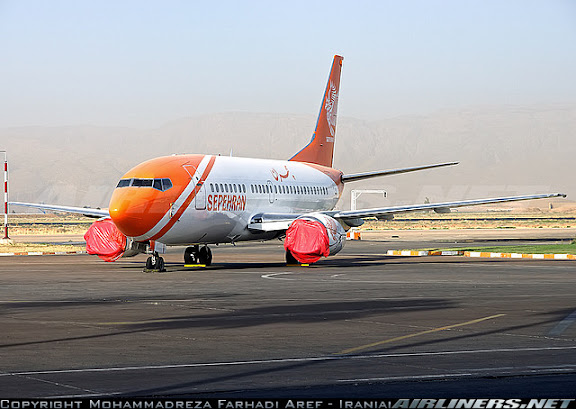 Aircraft is 23.9 years old, obtained by Shiraz-based Sepehran Airline from Indonesia's Expressair. (Second B737 obtained through such arrangements, the first being PK-TXG.) 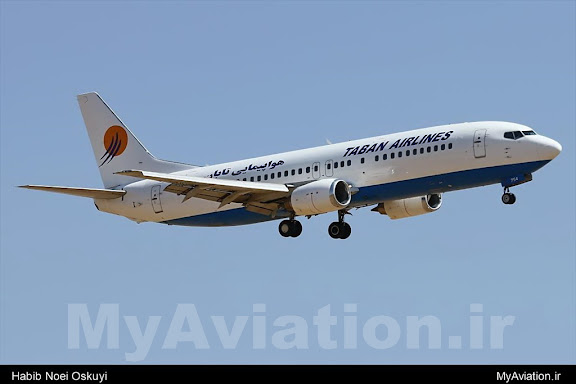 Aircraft is 17.4 years old, obtained by Mashhad-centered Taban Airlines through wet lease arrangement with Tajikistan's Tajik Air.
Posted by Mark Pyruz at 1:27 AM

Hopefully Boeing will be allowed to sell new 737 Next-Gen and MAX jets to Iranian carriers in the near future, providing a boost to Boeing.

They're going out shouting,"marg bar amrika!" But still they want Boeing made in "amrika".

Actually its not a matter of wanting it,its more like they dont have much choice considering the wests domination of the airliner market,tho iran today seems to prefer the european airbus to the "amrika" boeing.The only other alternative was the tu204/214 which the russians stupidly threw away the chance for a big order of a few years back.

just because a few of the minority do that, then there is no need to use a broad brush describing all in Iran.

25% f the population may have this belief and they have the right to shout whatever they like. You can not take the rest 75% hostage for that and say they as whole Iran. The aviation industry is for all Iranians.

ThW West shout out the terrorist and mullahs but still wants our oil...I think that kind of arguments are stupid...

Quite right,its a pity that those countries that sanctioned iran and prevented it from buying new airliners didnt think that way,oh well.

Well, try not to get too amped about Iranian domestic civil aviation : they don't travel much and not too many foreigners are anxious about a trip to that revolutionary country .
As far a selling Iran the Max 737 or similarly advanced western airplanes ,it should be noted that Iran's dilapidated aviation infrastructure and decrepit maintenance facilities are ages away from accommodating any such aircraft . And one needs to be careful about selling or transferring new technology to hostile governments .
Given the history of past dealings with Antonov , the low-tech An-148 or An-158 seems to be a better fit for Iranian market .
Both Airbus and Boeing enjoy a far more lucrative market in Arab states of Persian Gulf that could easily offset any potential gains in Iranian orders for new planes .

Iranians don't travel much??? Well I think you don't know anything about Iranians in this point. Did you ever hear from eyde noruz? Or haj....makke...karbala...iranians travel a lot. Almost when holidays just for 3 or 4 days. They don't care to drive even 500 miles...hmmm

Looks like you people didn't understand what I meant by "they". "They" meaning the "marg bar amrika!" sheeple that are brought out once in a while then sent back into their stable.They don't even number quarter per cent of the population let alone "25%".

What I meant was quarter of one per cent of the population in Iran !

I know that whole post is just ridiculous,I especially have to laugh about the part about "dilapidated aviation infrastructure and decrepit maintenance facilities",lol

Ah.. this is a thread about airliners not about politics