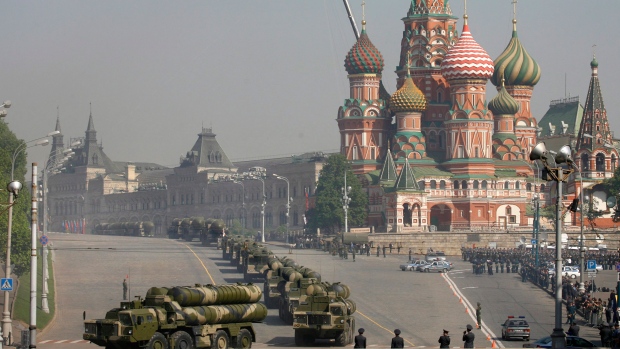 “This week a memorandum on the implementation to supply Russian S-300 missile defense systems to Iran has been signed. It is a kind of a ‘roadmap,’” an unidentified official of Russia’s Federal Service for Military-Technical Cooperation was quoted as saying on Thursday. The report also said that no “timeframe” is specified in the MoU. (Press TV, 27 August)

Without specifying a timeframe, it was not clear how useful the roadmap on the delivery of S-300 systems would be, and what purpose the MoU would serve.

I will believe it when I see it. The Russians have been playing Iran for 200 years.

The Russians cannot be trusted. I don't understand when the Iranians will start to understand this fact. In the heat of the moment the Russians will turn their back to Iran and will not honor the agreement.

It took the ruling elites in Iran 35+ years to finally understand that Russia and China will never come to their "rescue" so they might as well cosy up to the West. Better late than never.

Russians want Iran to revoke his case regarding the previous contract in the international court before delivering the system but Iran insists that she would do it after delivery of the first batch. In no circumstances should Iran revoke the case before receiving a meaningful part of the contract. Never trust a Russian.

The formal signing of the agreement is just for the show . It's been suspected that the Russians have been trying for years now , both overtly and covertly, to build a fully integrated and capable air defense system in Iran .The creation of a separate branch in Iranian military controlled by Khatem Al-Anbya command center is in accordance with that plan. The question now is how good the Russian technology really is .

Did British and French do better in war against Russia?

When it comes to design on pen and paper and whiteboard they excel and nowadays they can buy any component they want. As long as there is cash flow they technologically do very well. Their systems are still very capable. Problem is at the end it is the Chinese and United states that have enough cash to have a sustained development and the Russians are having trouble with that.

Dear Anon 12:06
I think the Iranian government learned that lesson a long time ago that as long as they stick to their rigid ideology , they can't and shouldn't count on the outside world to come to their rescue
With the west is busy cozying up to Egypt , KSA and UAE , there's very little room left for Iran to wiggle .A western military cooperation with Iran is out of question for the unforeseeable future . An Iranian membership into Shanghi Cooperation Organization is the best possible alternative since it might have a moderating effect on Iranian policies .

Hey Putin !
You'd better not even think of messing with the Royal Luxemburg Auxiliary Air Force .

I think Russia has many good reasons to deliver. I believe production capacity is the biggest hurdle. Technology transfers would be of interest if it was possible to monitor. Maybe we aren't far away from the day we see Russian or Iranian designed weapon systems being built under licence or in joint ventures in Iran.

Perhaps, but the same Auxiliary airforce defended the skies of Iran for 8 years with no spare parts and a total arms embargo and has produced more air-aces of F-14A, F4E and F5E that even the US airforce. It would be good to do some research on international air-combat aces and the list of Iranian heroes is so long that it covers a whole page including Majors Jalil Zandi, Hoda, Dowran (highest kills of F-14A and F-4E) to name a few. Belittling the bravery of Iranians is very unbecoming, especially from someone living in the west.

Are you the same anon ?

Iran will join Russia and finance development of the newest T50 russian stealth fighter.
Russia will need money for that development, and because India is less reliable military customer than before, Iran will take that place of India in the coming future......
I strongly agree, that licence build military system will be an Iranian goal in the cooperation with the Russian Federation.