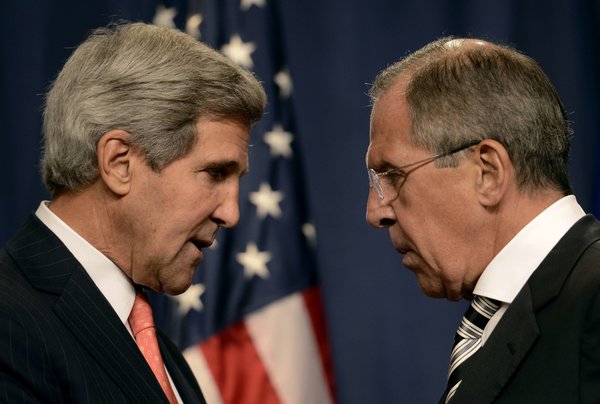 The United States and Russia have reached an agreement that calls for Syria’s arsenal of chemical weapons to be removed or destroyed by the middle of 2014. Under the agreement, Syria must submit a “comprehensive listing” of its chemical weapons stockpiles within a week, and international inspectors must be on the ground in Syria by November. (The New York Times, 14 September)

Secretary of State John Kerry and the Russian Foreign Minister Sergey V. Lavrov announced the agreement today at a news conference in Geneva.

The four-page agreement is entitled “Framework For Elimination of Syrian Chemical Weapons.” The agreement, which outlines procedures for “expeditious destruction of the Syrian chemical weapons program and stringent verification,” says that the United States and Russia will submit a plan in the next several days to the Organization for the Prohibition of Chemical Weapons, which oversees compliance with the chemical weapons accord.

The two sides also reached a consensus on the size of Syria’s stockpile, an essential prerequisite to any international plan to control and dismantle the weapons.

“If fully implemented,” Kerry said, “this framework can provide greater protection and security to the world.” (NYT, 14 September)
Any violations of the agreement by the Syrian government would then be taken up under Chapter 7 of the United Nations Charter, which authorizes punitive action.

Syria just gave up its only credible deterrence against Israel.

US lost pretext for launching war on Syria: Iranian official

An Iranian deputy Foreign Minister says the US no longer has a pretext to attack on Syria given a recent agreement reached between Washington and Moscow on a plan to destroy Syria's chemical weapons.

“Given the new circumstance in Syria, the US and certain sides ... have lost of the pretext for military action against the country,” Hossein Amir-Abdollahian said Saturday.

“Currently, the ball is in the court of the other side and they need to take confidence-building measures toward Syrians,” he added, calling for measures to stop the flow of foreign militants and terrorists into Syria.

http://www.youtube.com/watch?v=njdWjqX1YrE --- President Obama adressing the nation regarding the Syrian dictators use of Chemical weapons.

Because of Kerry's remarks, the USA and its zionist masters have lost their excuse for starting a war with Syria. Now wait for the consequences for him, from the zionist lobby and regime.

Mat, the "inspectors" will look for the "ball" in Assad's palaces for next several years or....