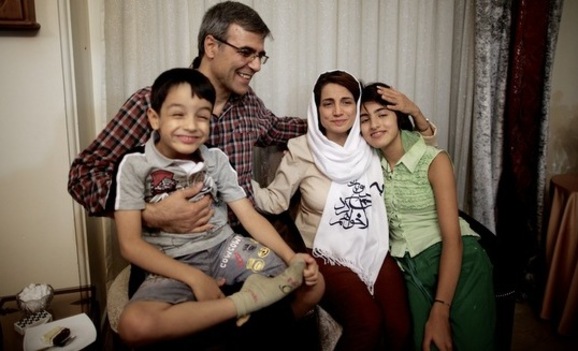 Iranian human rights lawyer Nasrin Sotoudeh, one of Iran's highest profile political prisoners, was freed on Wednesday. 14 other prisoners who were linked to the mass protests after the 2009 re-election of former president Mahmoud Ahmadinejad were also freed.


Sotoudeh, 50, who defended journalists and rights activists, was arrested in 2010. She told reporters today that she “free forever,” not on temporary release, and planned to resume her legal career.

List of political prisoners who were freed (Kaleme, 18 September):

Photo credit: Nasrin Sotoudeh sits with her husband Reza Khandan, her son Nima and her daughter Mehraveh at their home in Tehran after being freed from prison. September 18, 2013. (Behrouz Mehria/AFP/Getty Images)
Posted by Nader Uskowi at 6:00 PM

it was always very clear to me that this people will be held, until ahmadi nejad is gone
they can not come again and claim the election was rigged