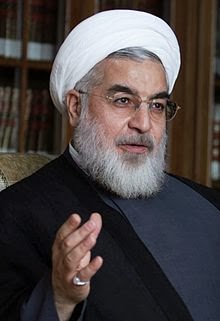 In the piece, Rouhani defines the country’s nuclear program in terms of Iran’s demand for dignity and respect and a consequent role in the region and the world. Rouhani then suggests a broad road map for future negotiations with the United States. He implies that Iran and the U.S. could resolve the Iranian nuclear impasse and the Syrian conflict as part of that broad approach. “We need to aim higher,” Rouhani says.

To read the Op-Ed piece, please click here.
Posted by Nader Uskowi at 2:30 AM

We keep hearing about "fresh approach" from the Iranian side, and "deeds" from the American side.

But like most of us, I'm hoping for the best: that some sort of engagement and agreement is achieved.

Well, the author portrays himself...like a constructive thinker.
But wait a minute dude, where do you see the "deeds"...from the American side?

Iranians are facing a conflict between their delusions (that they are a great, successful nation blah blah) and reality (that they are a third world country of ants that the U.S. can crush with a motion of its hand).

The worst thing the U.S. can do now is to be nice, and fuel the Iranian delusion. Strengthen sanctions and put this country of liars in its place.

That’s not quite right on Rouhani. He appears to believe, and suggest, that if the U.S. approaches Iran with dignity and respect, and recognizes the Islamic Republic, then all issues, including the nuclear impasse and Syria would be resolved almost in no time. These are exiting times in Iran-U.S. relations.

" He appears to believe, and suggest, that if the U.S. approaches Iran with dignity and respect, and recognizes the Islamic Republic, then all issues, including the nuclear impasse and Syria would be resolved almost in no time."

and that is quite hard to believe.

I doubt that Iran's real leaders are ready to sacrifice the weapons development program and the Assads merely for a show of respect.


" These are exiting times in Iran-U.S. relations."

very interesting sentence........it may indeed be an exciting exit ahead for peaceful relations, but perhaps not.

Nader UskowiSeptember 19, 2013 at 11:32 PM
"U.S. approaches Iran with dignity and respect, and recognizes the Islamic Republic"
This would of course mean a 180 degree about face in us policy towards iran,its very difficult to see the us doing this,it would be a tacit admission of defeat by the us for its policies,but I guess time will tell personally I am not optimistic

"country of liars", a perfect description of the USA and its masters, the zionist occupation.

hasbara tactic: repeat the lie you want for the facts that are until it becomes the accepted 'truth'. A tactic copied from nazi propaganda, based on the idea of “Make the lie big, make it simple, keep saying it, and eventually they will believe it”

Uskowi!
ROUHANI'S ideas are the same as the former administration in solving the dispute with the WEST in general, the difference being the language!.
even before HIM we had reformists who 'believed'!, yet in the end they got some rude shock by being labelled as the AXIS OF EVIL!!.We are all watching very keenly where the US will start from in engaging IRAN!.

There is no 'other' - in either way; there is no Iran and no USA; USA and Iran are both complex societies; you can see good things in them; you can see bad things in them; it is up to you because your reaction to the other REPEATS yourself originally; it is you that is choosing to see what you see in the other; if you see the good things in USA you will repeats those traits in your self; if you see bad things in the USA you will repeat those traits in you own behavior - same with IRan from US view; your reaction (to the other) is the repetition of your character; IRAN and USA have to meat each other in this very fundamental and simple level ...

No one should believe the liars in Tehran.The regime doesn't treat the Iranian people with "dignity". So why should a regime full of criminals be treated by others with "dignity"?

truly inane and blatherous.... but well-meant.

The draft was put forward by 32 countries during the International Atomic Energy Agency's annual General Conference in the Austrian capital, Vienna, on Friday to criticize Israel's refusal to acknowledge its possession of nuclear weapons.

The proposed resolution was defeated by 51 votes against and 43 in favor. Thirty-two countries abstained.

Oman's Ambassador to the IAEA Badr Mohamed Zaher Al Hinai, who talked on behalf of the Arab states, said the proposed resolution "could resuscitate" efforts towards a nuclear-free Middle East, AFP reported.

He also accused Western countries of applying double standards with regard to the issue of nuclear weapons in the Middle East.