Obama and Rouhani Speak on the Phone

Historic Direct Contact Between Presidents of U.S. and Islamic Republic 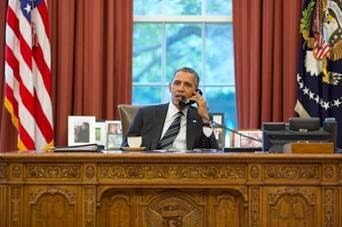 President Obama said at a White House news conference today that he spoke over the phone with Iranian President Hassan Rouhani this afternoon, the first direct contact between U.S. and Iranian leaders since before the 1979 revolution. (Washington Post, 27 September)

Rouhani tweeted minutes before Obama took the podium that they had spoken on the phone while he was on his way to the airport to fly back to Tehran after a week in New York for the United Nations General Assembly.

Rouhani added that they ended the phone conversation by telling Obama, “have a nice day.” Obama responded with “khoda hafez,” colloquial Farsi that communicates a friendly goodbye.

Obama, in his news conference, said he would seek “transparent, meaningful and verifiable actions” on the Iranian nuclear program.

“A path to a meaningful agreement will be difficult,” Obama said. “And at this point, both sides have significant concerns that will have to be overcome. But I believe we've got a responsibility to pursue diplomacy, and that we have a unique opportunity to make progress with the new leadership in Tehran.”

The Deal could be
iran should:
1) stop the uran enrichment at 20% level
2) limit the number of centrifuges
3) allow all inspection and sign the NPT amendment
the Westen should lift all sanctions

This Deal is o.k
Iran can save all nuke assets
The westen can be sure, no nuke bomb will made

You are a deluded fool if you think the U.S. is that dumb. If the U.S. were as dumb as you think, you wouldn't be living in my country speaking my language. Here is what WILL happen. The U.S. will demand essentially a complete halt to enrichment, except for some minor token amount, full access to any suspected site (and this list could grow) and if these are not met, Mr. Obama will have every reason to increase sanctions and hopefully launch an attack.

Iranian rug salesmen think the world is stupid, but it's not.

Why the Obama has called Rohani and not vice versa ?
The stop of Enrichment is out of discussion, that is demand of Israel not of the US
iran will give up nothing only to ensure that nuke program has no danger to anyone
this day Israel is the true loser

nothing will stop the march of my Empire

I'm absolutely overwhelmed and flabbergasted over this intelligence level and delighted that not all Americans are such brainiacs.

And this thirst for a new war knocks my socks off. It is so pitiful and pathetic. How about visiting a psychotherapist? Seriously.

A.P., that brainiac is not a real American. That lust for war does not benefit America or ordinary Americans. It only benefits one kind of person, the kind that hires shills to post their propaganda on the internet while pretending to be Americans and follow the motto of "By way of deception, thou shalt do war".

Post with an ID if you are so convinced and face the humiliation of being proven wrong. The US is not dumb but as any other country it has an abundance of dumb people, yourself not excluded.

Ayatollah Rouhani expects that any deal with the West will be reached in 3 to 6 months, meanwhile Obama has earlier stated that mending relations with Iran will take lenghty period of time.

Has President Rouhani meant that that deal will set a deadline for lifting all major sanctions if not all of them?.

Obama statement points to goals of their strategy, where they will try to "penetrate" (and weaken) system of the Islamic Republic; under disguise of prolonged inspections, before the next US elections... and for the apeasement of the Zionists.