Iran Has No Intentions to Build Nuclear Weapons – Rouhani

‘Peace Is Within Reach’ 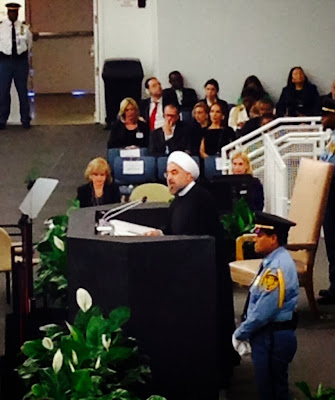 Iranian President Hassan Rouhani told the UN General Assembly that nuclear weapons have no place in the national security of Iran. He emphasized that Iran has no intentions to ever build nuclear weapons. But Rouhani added that Iran must have the right to uranium enrichment.

Rouhani said that he listened carefully to President Obama’s speech earlier today at the UNGA, and believed it would be possible to establish a joint framework to resolve problems between the two countries. He said he hoped the U.S. would refrain from war-mongering pressure groups. He added, “Peace is within reach.”

Rouhani said Iran was ready for immediate “time-bond and result-oriented” nuclear talks to achieve full transparancy. “There is no issue or dossier that cannot be resolved,” Rouhani said.

http://www.youtube.com/watch?v=SXLPEhJBnS8 --- Rejects accusations of surrendering on the nuclear issue as former nuclear negotiator.