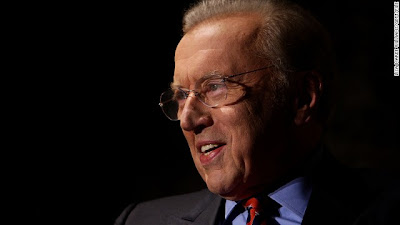 Veteran British broadcaster Sir David Frost, best known for his series of interviews with President Richard Nixon, has died. He was 74.

Frost suffered a heart attack while giving a speech on Saturday evening, the BBC reported today. He is survived by his wife of 30 years and three children.
“My heart goes out to David Frost's family,” British Prime Minister David Cameron tweeted this morning. “He could be -- and certainly was with me -- both a friend and a fearsome interviewer.” (BBC, 1 September)
Frost's famous interviews with Nixon, and the story behind them, were portrayed in the play and film "Frost/Nixon," written by Peter Morgan. The late Shah of Iran also sat for his last interview with Frost. The video of that interview, conducted in 1979 in Panama, appears above.