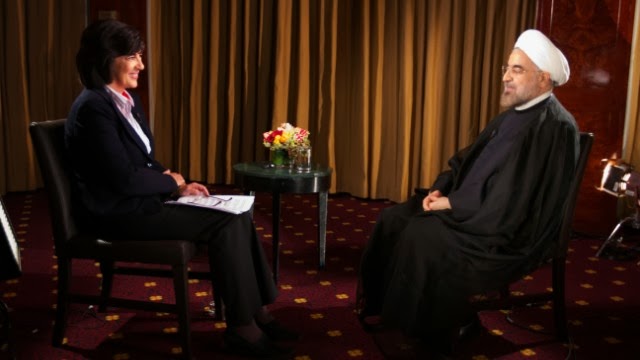 Iranian President Hassan Rouhani asserted in a CNN interview that he condemned the Holocaust. In the CNN interview, recorded on Tuesday and broadcast today, Christiane Amanpour asked Rouhani about his view of the Holocaust. Rouhani responded:
“Any crime that happens in history against humanity, including the crime the Nazis created towards the Jews, is reprehensible and condemnable… Whatever criminality they committed against the Jews, we condemn,” Rouhani said. “The taking of human life is contemptible. It makes no difference whether that life is Jewish life, Christian or Muslim. For us it is the same.” (CNN/New York Times, 24 September)

Asked about the meeting with President Obama which never materialized, Rouhani answers:
“The United States declared its interest in having such a meeting and in principle could have, under certain circumstances, allowed it to happen… But I believe we didn’t have sufficient time to really coordinate the meeting,” said Rouhani.

Earlier reports from the White House indicated that Rouhani and his team thought a meeting with Obama was “too complicated.” A sign that the powerful conservative and fundamentalist forces inside Iran were against such meeting.
During the interview, however, Rouhani sent his “greetings to the people of America who are very dear and near to the hearts of the Iranian people.” (CNN/New York Times, 24 September)
Photo credit: President Hassan Rouhani of Iran with CNN’s Christiane Amanpour. 24 September 2013. (amanpour.blogs.cnn.com)
Posted by Nader Uskowi at 8:36 PM

It would be interesting to see whether these remarks are played up in the Iranian governments news sites and placed prominently before the Iranian population.

and, as expected, the Iranian people are being told by FARS that CNN deliberately misinterpreted Rouhani's remarks and that he really wasn't discussing Nazi crimes against Jews.


the slime of Khomeini's attitude and the ugliness of Khomeini's bigotry continues..... and the notion that Rouhani really is free to change anything is cast deeper into doubt.