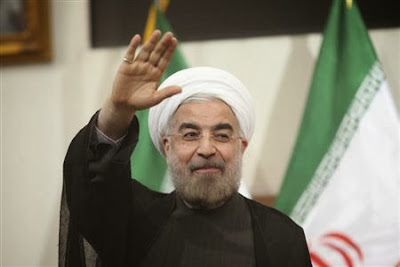 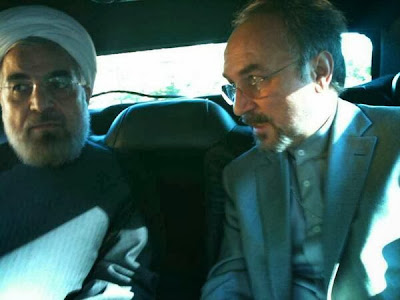 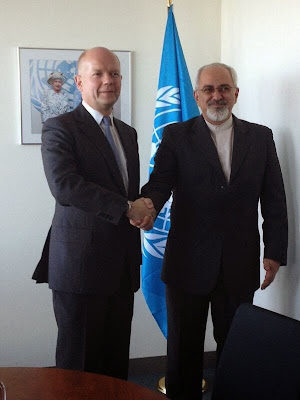 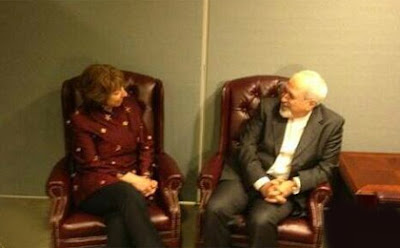 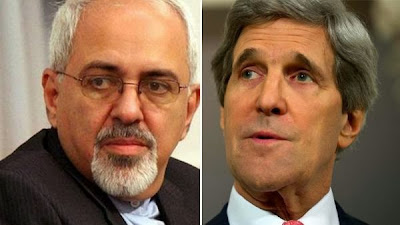 Iranian President Hassan Rouhani and his foreign policy team arrived in New York on Sunday for a week of high-stake diplomacy during and on the sidelines of the annual meeting of the UN General Assembly.
- Iranian Foreign Minister Mohammad Javad Zarif met on Monday with EU foreign policy chief Catherine Ashton. The two chair the Iranian and P5+1 delegations respectively in talks on Iranian nuclear program.
- Zarif on Monday also met with British Foreign Secretary William Hague, who put a photo of their handshaking on Twitter.
- President Hassan Rouhani will address the UNGA on Tuesday. He is expected to call for UN support of Iran’s nuclear rights and use of diplomacy to resolve the Syrian conflict. Rouhani, however, is also expected to use a moderate tone unheard of in the eight years of Ahmadinejad’s administration, in what is now called the Iranian “charm offensive,” to raise the international status of Iran.
- On Thursday, Zarif and the U.S. Secretary of State John Kerry will head their delegations during the P5+1 foreign minister meeting. The symbolic gathering is expected to set a positive tone for the upcoming nuclear negotiations between Iran and the six major powers.
- Rouhani could also meet with President Barrack Obama. The U.S. president will open the UNGA meeting on Tuesday. Rouhani will address the UNGA on the same day.
- Rouhani will also chair the meeting of Non-Aligned Movement in New York on Thursday.
Photo from top to bottom:
Iranian President Hassan Rouhani (Reuters)

Photos of Zarif and U.S. Secretary of State John Kerry who will attend the P5+1/Iran foreign ministers meeting on Thursday (AFP)
Posted by Nader Uskowi at 10:03 PM

I hope he holds his speech in English and not allow the likes of Wolf Blitzer of AIPAc and others like him to tell the world what he said.

The behind the scenes killer of Iranian students has arrived in New York with a smutty smile on his sly face.

Rohani will probably have his own translator or provide a written translation of his speech in one of the UN official languages. If he chooses the latter then he has to stay within the text without deviation. I understand Gaddafi once addressed UN assembly not in Arabic, Libya's official language, but a local Libyan dialect!

welcome to the new diplomatic face of IRAN!!!

What, "new diplomatic face of IRAN!!!"? The same liars are still occupying the country.
Same turd with a new nappy.

cnn seems to have changed the content and wording of his interview with amanpur.
i think ur worries were legit.

Blitzer doesn't work for AIPAC. when Blitzer was working for them, Khomeini was still an obscure hate-filled creep living in France.