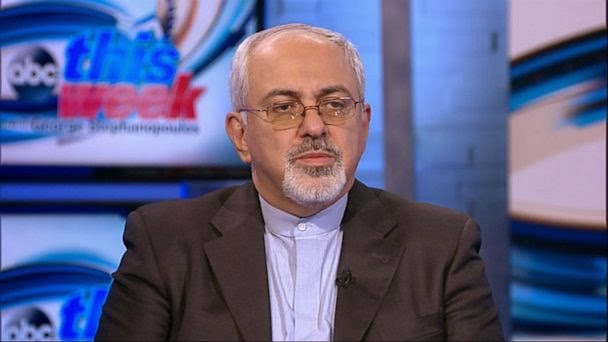 In an exclusive interview today on ABC’s “This Week,” Iranian Foreign Minister Mohammad Javad Zarif said resolution of the nuclear issue “will be a first step, a necessary first step, towards removing the tensions and doubts and misgivings that (Iran and the United States) have had about each other for the last 30-some years.”

“There has been 34 years of the building up of this mutual distrust,” Zarif told ‘This Week’ host George Stephanopoulos.

“We need to move in that direction of removing some of that mistrust, true mutual steps that each side needs to take in order to convince the other side that its intentions are positive and for a better future for all of us.” (ABC News, 29 September)

Zarif added that Iran was prepared to start negotiating on its nuclear program. He said while Iran is not seeking nuclear weapons, its right to enrich uranium is non-negotiable.

“We know that Iran is not seeking a nuclear weapon,” Zarif said. “Having an Iran that does not have nuclear weapons is not just your goal. It’s first and foremost our goal.”

“We do not need military grade uranium. That is a certainty and we will not move in that direction,” Zarif said.

Zarif also told Stephanopoulos that Holocaust was a “heinous crime” and “genocide.” He emphasized, “Holocaust is not a myth.”

Responding to a question that the website of Iran’s Supreme Leader Ayatollah Ali Khamenei still refers to the “myth of massacre of Jews and Holocaust,” Zarif said the problem was with the poor English translation of the original Farsi statement.