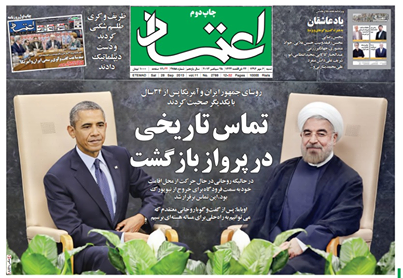 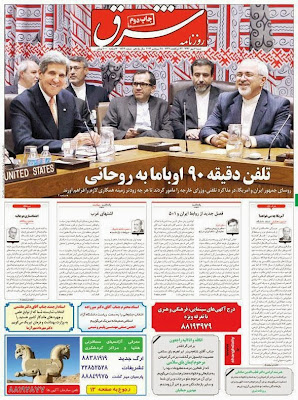 The United States and Iran agreed on Friday on speeding the nuclear talks to end a decade-old impasse on Iranian nuclear program. The agreement came during a historic 15-minute phone conversation between President Obama and President Rouhani, as the Iranian leader was headed to the airport to leave New York after his weeklong visit.

The phone conversation was indeed historic. It was the first direct contact between the U.S. and Iranian leaders since the shah of Iran and former president Jimmy Carter met in Tehran in December 1977. But the 15-minute conversation was more than symbolic; it was a substantive discussion of the impasse, and ways to accelerate talks and defuse tensions.

Afterward, the two expressed optimism at the prospect of a rapprochement between the two countries that would also transform the Middle East.
“Resolving this issue, obviously, could also serve as a major step forward in a new relationship between the United States and the Islamic Republic of Iran, one based on mutual interests and mutual respect,” Obama told reporters at the White House after his phone call to Rouhani. “It would also help facilitate a better relationship between Iran and the international community, as well as others in the region.” (The New York Times, 28 September)
“With political will, there is a way to rapidly solve the matter,” tweeted Rouhani soon after the phone conversation on the way to the airport. “We’re hopeful about what we will see… in coming weeks and months.”
In comments to reporters after his arrival at Tehran airport today, Rouhani elaborated on the call with Mr. Obama.
“Yesterday as we were getting ready to head to the airport, the White House called and expressed willingness to set up a phone call between the American president and me,” Rouhani said.

“A call was made to our ambassador’s cellphone,” Rouhani added. “The conversation mostly focused on the nuclear issue.” (Fars News Agency, 27 September)
Rouhani was met by protesters after his arrival in Tehran. They chanted slogans against the expected rapprochement between Iran and the United States, and threw eggs and a shoe at the president. For a report on that incident, please click here.
The state-run TV, Islamic Republic of Iran News Network, had not mentioned the phone call with Mr. Obama as of midnight Friday, and the original messages on Mr. Rouhani’s Twitter account were deleted and replaced with more anodyne comments. But Mr. Rouhani’s office announced the call in a statement carried by the Iranian state news agency and independent newspapers in Tehran. In the photos above, Sharq and Etemad newspapers announce the phone conversation during the last minutes of Rouhani’s stay in New York.
Top photo credit: Saturday front page of Etemad with the headline on Obama-Rouhani phone conversation. (Etemad/Radio Farda)

It's funny that Iran is now faced with a negotiator who does bullshit, tarof, and lies as well as they do. Obama is setting up the justification for an attack.

We saw shocked reactions from some in China, also, before, during and after Nixon's trip to Beijing in 1972. So this should not be regarded as too surprising.

The Obama administration needs to provide the Rouhani administration with something tangible in the upcoming nuclear talks, preferably in the form of real sanction relief ordinary Iranians can feel on an everyday basis. Otherwise we'll see a repeat of what happened to Khatami following his support for the US leading up to and during initial phase of OEF. There, that administration was labelled "Axis of Evil" by the recipient of this outreach effort.

Sanctions work.Because if it didn't, these mullahs wouldn't come to the negotiating table.

Too much emphasise has been given to negotiation with US and not EU. Obama cannot change the law without going to US congress, known for its hostility towards Iranian people and its numbers’ unholy association with AIPAC. Free from AIPACS influence, EU has both the credibility and political muscle to deal objectively with the current impasse and bring sense to US congress

Iran had a number of years with which to negotiate with the EU, 8 years or so----- and Iran stonewalled them.

negotiations with the US are Iran's last options for reaching an agreement.

AnonymousSeptember 29, 2013 at 4:38 PM
There were no negotiations merely the west constantly restating its demand that iran must halt all enrichment while completely ignoring irans rights under the npt,the only ones "stone walling" were the west,had they simply accepted irans right to enrich with iran agreeing to voluntarily limit enrichment to 5% in return then a deal could have been done years ago