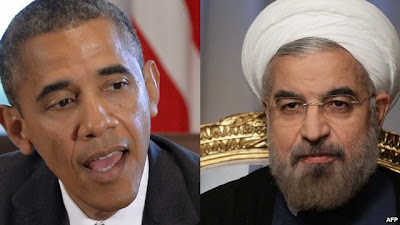 A meeting proved “too complicated for Iranians to do at this point,” said the officials. (ABC News, 24 September)

The officials did not explain what the complications were, but many Iran experts believe that powerful conservative and fundamentalist forces inside Iran were against any encounter with the U.S. president. This blogger believes the new Iranian president missed a golden opportunity to radically alter the atmospherics of relationships with the U.S. and indeed the West, as he had preached so many times in recent days.
Still, the Obama administration signaled today that it wants to move forward with a new round of diplomacy with Iran, affirming a meeting Thursday in New York between Secretary of State John Kerry and Iranian Foreign Minister Mohammad Javad Zarif.

Earlier today, Rouhani was a no-show at a U.N. luncheon for world leaders when he would have shared the room with Obama. Iranian state media said Rouhani skipped the event because alcohol was being served.  He later met one-on-one with French President Francois Hollande. (ABC News, 24 September)

the same old crap from Khatami era. Missed opportunities with non sencial excuses like meeting is too complicated or alcohol was served at lunch. I don't think anything is going to get better until these mullahs disappear from Iranian stage. The nation is taken hostage by a bunch of lower class idiots who had no issue shakinh hands with Saddam despite the fact that he killed and gassed thousands of Iranian people and his own. Frankly we are hoping that some clown among these turban heads is going to solve our country's problems! It is just a self kidding process.

Couldn't say it better myself.These charlatan clowns are taking Iranians for a ride.

It will be interesting to hear from the Leveretts on this matter. They're in New York for the UNGA event and meeting with the Iranian delegation; so we'll likely be getting the Iranian view and will be better able to round out perspective with this newswire rendering from unnamed "Obama administration officials".

The author has apparently missed his "golden opportunity" to be rewarded for his fallacious position that the Islamic Republic has to come to terms with the West...(at the West's wishes).

Obama statement, or a plain threat,...that "three decades of an "estrangement".....would not be repaired quickly"
shows his disdain to Ayatollah Rouhani previous statements that an agreement should be reached as soon as possible and that the Islamic Republic is ready for "time-bound and result oriented" nuclear talks.

As time is showing the US still doesn't show sufficient respect and logic for result oriented contact, and instead tries to score points for its propaganda purposes, that Iran was forced to behave according to the US wishes and admonisions.

It is interesting that Mr. Mark has no significant opinion; related to the refusal of meeting with Obama at this time, and is "awaiting" for Leveretts' opinions.

Rouhani had two chances today to change the conversation on Iran for good, and he failed to take advantage of them both. First, he refused to meet with Obama even though he had said, actually preached, the necessity to change the old ways of doing things. Second, in his speech at the UN, aside reciting poetic verses, he showed not much flexibility on substantive issues. Very disappointing, indeed.

Dear Nader as an neutral blogger maybe u can also investigate is it normal that the president of iri do not attend any meeting with alcohol...maybe u reflect also why alcohol is a must be at this event? Could some alcoholics not wait and respect the interesst of others even for a few hours. Its not invite by us its a invitation by the un. And also interesting is did karzai go to the lunch or maliki? They are also Muslims...and belive me nader "too complicate for iranian side" is just a lie. Rouhani announced already he has full authority to deal on this matter!!! I tell u who has no full authority to negotiate it to a happy end. Its obama. His masters dont allows him. And "too deep" means he dont want to resolve something seriously "just a little bit" not too deep to have bo more Military options... 8 DONT KNOW WHY U CAN NOT READ BEYOND THE LINES. ITS SOOO CLEAR!!!! instead just iran iran iran. But hey dont forget I love your blog for more than 4 years now but u sometimes say things...dont forget 2 months ago u and others hails rouhani for beeing president because he and rafsanjani will change everything...u remember? I for myself know that when even jalili would become president it would be the same situation at un. Obamas masters are very uninterested who is president in iran. They have their plans and they will do so. Anyway who is president in iran and will or will not negotiate with us. Ahmadinejad was perfect for us. Now with rouhani they have to show again their face that its not about nuclear energy or weapons. Nothing like that. Its just because 9f power and resources.

Nader UskowiSeptember 24, 2013 at 10:17 PM
One could easily say the same of the us and obama,there was nothing new in obamas speech,sadly there seem to be many in the west and sadly some in iran who rather than hoping for a genuine dialogue and perhaps a detente,hope instead that rouhani will be the leader who will capitulate to western demands,perhaps you are one of those mr uskowi?

AnonymousSeptember 24, 2013 at 9:34 PM
The leveretts would without a doubt be the two most capable and well-informed western commentators when it comes to iran and I see nothing wrong with waiting for their opinions on these recent events.I do however agree with pretty much everything you have written

AnonymousSeptember 24, 2013 at 5:06 PM
Yes,and look at how the west reacted to Khatami?,what did he get for his outreach to the west?,it was pretty obvious that what the west wanted was an iran that was no different to the shahs ie: a compliant vassal state,iran as an "arab" dictatorship,and sadly it doesnt look like obama is willing to act any differently.It seems that you like obama want rouhani to capitulate to western demands

AnonymousSeptember 24, 2013 at 6:19 PM
What would you replace these "charlatan clowns" with?,or like most malcontents havent you bothered thinking that far ahead?

Nothing is disappointing here!!-

@-you have suggested that conservatives and fundamentalists inside Iran may have played a role in the missed 'golden opportunity'
-i think the editor reporting this story in the Guardian has tried to be very objective on the reasons for this issue .what is disappointing on your part is your deafening silence on the fundamentalists and conservatives in the US administration that have placed some complicated roadblocks on the way!

-AND IS THIS NOT ANOTHER sign that the Mandarins and sharks who are benefiting from the sanctions and isolation of Iran are pulling the strings from the shadows!?

I disagree that he failed to take advantage of the situation.The regime is simply playing their usual tricks for its survival.

The proposed meeting between Obama and Rouhani was to take place at the UN building after the luncheon. You are mixing up that meeting, which didn't happen, and the formal UN luncheon where alcoholic beverages are served. Serving alcohol was not the reason for Rouhani's refusal to attend the meeting. It was apparently "too complicated" for him to do so!

Your last paragraph is very interesting. Are you suggesting the “sharks” that are benefitting from sanctions were pulling strings on both sides against the rapprochement between U.S. and Iran? If that’s what you meant, I agree. There are entrenched interests on both sides who benefit politically and economically from continued conflict between the two countries and interestingly enough they are the extreme right in both countries.

I see you are still spewing out your ritualistic diatribes against posters who challange the lies and hegemony of your fascist islamic pay masters in Tehran. What troubles you? Because I'm here to help emulous peolpe like yourself to overcome their emotional problems and hatreds towards posters that hapitually speak the truth.

Better to drink wine from a cup than blood from the bodies of terrorized people of Iran.

claiming that it's because alcohol might be present as a reason not to have a meeting is simply pathetic.

Nader,
While the Iranian side has tried hard to imply that it was complicated for them (see Mr. Shariatmadari position in yesterday's Keyhan), we should be mindful that for the US side it was complicated too. I am sure you have seen and heard some of harsh comments from the very right in the US about even agreeing to have the two foreign ministers meet. Heads of states do not meet at the beginning of negotiation process. They meet at end to sign the agreements ! These early meetings are "working level" ones ! G.A. in MD

But Obama had the vision and courage of wanting the meeting, Rouhani did not have them.

Heads of states meet at the end is snot very useful concept. It depends to special circumstances at hand. Obama-Rouhani meeting would have broken the ice and created an atmosphere conducive to negotiations. Diplomacy is not following textbook definitions, but to grab the moment.

The only one "spewing""ritualistic diatribes" here is you,I`m simply asking you a question that you seem unable or unwilling to answer,its easy to say "down with the mullahs" but have you even bothered to give any thought to what you would replace the current system with?,I suspect probably not,like most malcontents you know what you dont like,but you`ve never bothered thinking any further ahead than that

Its actions that matter here not pretty speeches at the un or meaningless gestures like handshakes at a un luncheon,that fact that some people here seem fixated on a missed pr opportunity is pretty pathetic

Once again you ask that naive question regarding the replacement of the insane mullah regime with a system of sanity. Your questions are akin to a dog that likes to chase its own tail.

Anon 9:18 PM, they know what they want to replace the current system with, they just don't want to make it well known. They want to bring back the dictatorial monarchy.

AnonymousSeptember 26, 2013 at 12:07 PM
If you cannot answer my question then you have proved my point.

AnonymousSeptember 26, 2013 at 4:34 PM
I suspect you are probably right,or like a lot of malcontents he hasnt actually given any thought to what he wants to replace the current system of government with

You don't know jack! Because if you did,you wouldn't be writing nonsense like you are now.

We have answered that daft question of yours before. We are not willing to play, "catch the doggie tail" with you any longer.

AnonymousSeptember 27, 2013 at 10:06 AM
No you havent answered my question at all,you said that you would replace the current "insane" system with a "sane" one,now what exactly would that be?,are we talking a return to the palahvi military dictatorship,or some sort of secular "western style" democracy,would it be two party or multiparty,would it be based on an electoral college or the total number of votes?,sadly like a lot of malcontents you`ve spent all your time thinking about how much you hate the current system of government and how great things would surely be if only it were gone but you have given no thought to what would replace it.Next time instead of just mindlessly ranting you should actually give some thought to what sort of system of government you would prefer to live under

the opinions of the Leveretts would indeed be interesting,
as interesting as that of the space monkey, even if more predictable.