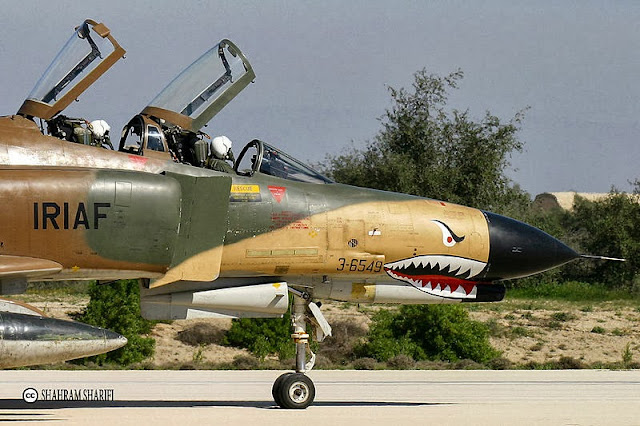 
The F-4E Phantom II of the 61st Tactical Fighter Squadron in Bushehr apparently had a “violent tire burst” while landing on runway 31L on September 23rd, forcing the aircraft off the runway. The crew attempted to eject which resulted in the tragic death of the pilot, Major Rezaie. The WSO Capt. Salimi was injured. (theaviationist.com, 27 September)
This is the third crash of an Iranian F-4 Phantom in the last three years, which includes the 2010 crash in Bushehr and 2012 crash in Bandar Abbas.
The F-4 remains the workhorse of IRIAF. The Iranian air force has recently mounted Qader anti-ship cruise missiles (ASCM) on its F-4Es (see the report here). The move gives Iran ALCM capabilities, in addition to its ASCMs that can be fired from land or the sea.
The Shah of Iran purchased more than 260 F-4s in late 1960s and 1970s. The first combat use of an F-4 by Iranian air force was in 1975 when the Shah supported Oman government against the separatist rebels in the country’s Dhofar province. It is estimated that some 30 F-4s were lost during the conflict. The F-4s played key role in the 8-year war with Iraq, and an estimated 80 Phantoms were lost during that war. To this day, the F-4s are responsible for majority of alert duties for the IRIAF.
Currently, the F-4Es are based in Bushehr, Bandar Abbas and Hamadan air force bases. It is estimated that some 60 F-4E and RF-4Es are still kept fly-worthy and operational, and few aging F-4Ds that are based in Chahbahar.

Note: Winston of The Spirit of Man first posted about the IRIAF F-4 accident on 25 September. To see his post, please click here. Our apologies to Winston and to our readers for not crediting the author and the blog. It was unintentional.

Photo credit: Shahram Sharifi/The Aviationist (the Aviationist says that the photo shows the crew members that were involved in the deadly crash of the F-4E on Monday)

best wishes for the families of the fallen Major Rezaie.

Thnx. I have the KIA crew's photo on my blog. I filed that report on The Aviationist blog per Mr. Cencioti's request.