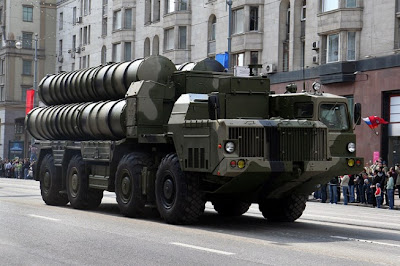 The Russian daily Kommersant reported today that the Russian government has threatened Iran to withdraw its support of the country’s nuclear program because of a $4-billion lawsuit filed by Iran against Rosoboronexport, Russia’s state military export company, for suspending its contract to supply Iran with S-300 air defense systems.
Kommersant quoted an unnamed senior official as saying that if Iran did not remove the lawsuit, it “will have to deal with the nuclear issue on the international stage alone.” The paper also said that the Kremlin has considered Iran “ungrateful” for Russia’s consistent support to Tehran’s nuclear program.
Russia began to supply Iran with S-300 missile air defense complexes in 2007, but in 2010, Russian President Dmitry Medvedev signed a decree implementing a UN Security Council resolution, which banned the sale of advanced weapons systems to Iran.

Russia is not a good friend for Iran; it instigates and supports Anti-Americanism inside Iran for its own interests; Anti-Americanism is the religion of Losers and the last thing we need in Iran; the green Movement already knew that as they responded with: "down with Russia"

Doesn't mean we should consider America as a friend of Iran. After all, we didn't forget the U.S.'s past misdeeds in Iran in 1953.

what you SHOULD consider is the paucity of real friends that Iran has under this regime.

Anon 3:05 PM
What according your means is a Loser and a winner?
One famous guy T.T., who undoubtly loves Usa, said that Christianity is for losers.
Is a professional prostitute a winner or Loser?.

Do not blame the Russians.
The contract was canceled by Medvedev who,righr after he was elected, was visited by Mr. HENRY Kissinger with a group of US senators. Kissinger talked with Medvedev for several hours alltogheter, during that visit. The lenght of those conversations was unusual, given that it was partially if not a private visit. Both gentelmen and may be some accompanying senators have had jewish ancestry roots...

Actually, the article here is incorrect. The UN Security Council resolution DOES NOT ban the sale of conventional systems like the S-300 to Iran. The rsolution merely states that countries should be "vigilant" and show "restraint" in transferring weapons technology to Iran. Thus, Russia breached a legal contract with regard to the S-300, and the lawsuit is perfectly legitimate. That is precisely why Russia has adopted this present attitude of beligerence, because it knows Iran will win the lawsuit.

Russia should shut the hell up, or Iran could go back in alliance with the West against Russia. Dumb Russian idiots.

S-300 is a defensive weapons system. it is and should not be forbidden. if it is forbidden iran should buy or build it anyway. why? because its purpse is to make sure nobody kills iranians and destroys iranian infrastructure by massive bombardment nato style.

Russia and China are using Iran as a wildcat to serve and protect their political and economical interests.
Unfortunately those people who advocate that Iran should have an alliance with the US don't know that the current political establishment in Iran don't serve the countries interests.
Don't forget the regime is selling Iran down the tube for the want of a few kilos of uranium. The Russians and Chinese know this and are extracting the maximum from Iran and blackmailing them at the same time.
Now someone will say that the uranium is useful for making bombs if attacked.
But honestly ask yourselves if Iran made up with the US and even Israel would we really need to go down this very unprofitable path?
And for those people that keep carting on about 1953 how about 1946 when the US told the USSR forces to leave Azarbaijan when they tried to join it to Baku?
End of the day countries serve their own political and economic interests.It's about time that the people got rid of this regime and replace it with a pro Iranian one.

As if Iran would do such a silly thing now finally when they have Russia by the B.....'s !

I say to hell with Russia if it is so-called support is not for belief in Iran's case but simply to extract benefits. What kind of support that has led to four sanction resolutions? With or without Russia's support the West cannot attack Iran.

Don't you think you got it all back to front?
Think before you write your unfounded nonsense.

I see that authors of the blog censor my comments; by removing them, and suggest about a paranoia to me, but they let primitive propaganda and slanders against the Islamic Republic of Iran and Russia.

Looks like those who are concerned about "antisemitism" and "paranoia" are tolerant about slander of Russians...

Anon 5:30 AM.......What's there to "slander" against the Islamic theocracy?
They always open their dirty wide traps and blurt out obscenity against every country they don't like.
They only slander themselves.