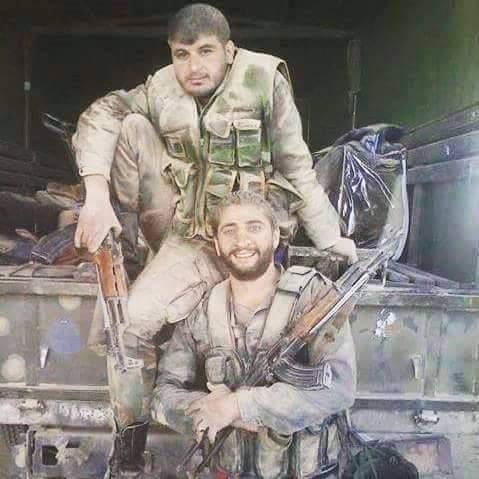 According to Chris Tomson at Al-Masdar News, dated 11NOV15:


[T]he Syrian Arab Army’s Tiger Forces (Cheetah Forces Team 6) finally managed to liberate Kuweiris Airbase after the area had been besieged for 35 months by the Islamic State of Iraq and Al-Sham (ISIS).

Currently, Tiger Forces are attempting to thicken the dangerously thin supply line that cuts deep into previously ISIS-held territory; however, this unit is set to be reployed to Hama, leaving the future of this base in the Deir Hafer Plains unknown.

On the southern front, the Syrian Arab Army’s 4th Mechanized Division and Hezbollah have captured approximately 250 square kilometers of territory in just one month of fighting the Islamist opposition fighters.

In the last 48 hours alone, the Syrian Arab Army and Hezbollah have captured 5 villages that are located south of the strategic town of Al-Hader while the Islamist insurgents were only able to recapture 1 village from the pro-government forces.

Syrian Army and Hezbollah soldiers on this frontline have seen themselves advance to areas which had previously been rebel-held since the summer of 2012.

According to Leith Fadel at Al-Masdar News, dated 11NOV15:


On Tuesday morning, the Syrian Arab Army’s 4th Mechanized Division – in coordination with Hezbollah, the National Defense Forces (NDF) of Aleppo City, the Al-Ba’ath Battalions, and several Iranian and Iraq paramilitary units – expanded their control over a number of points in the southern Aleppo countryside after a series of intense firefights with the Islamist rebels of Harakat Ahrar Al-Sham, Harakat Nouriddeen Al-Zinki, the Syrian Al-Qaeda group “Jabhat Al-Nusra”, and Liwaa Suqour Al-Sham.

The Syrian Armed Forces and the Lebanese Resistance began their assault in Markahalah, where they were confronted by a large contingent of fighters from Harakat Ahrar Al-Sham and Harakat Nouriddeen Al-Zinki at the eastern perimeter of this small village located directly west of Tal Mamou; this aforementioned village was captured by the Syrian Armed Forces and Lebanese Resistance the day before this successful assault.

Not long after they began their assault at this village, the Syrian Armed Forces and Lebanese Resistance imposed full control over Markahalah, killing several enemy combatants from Harakat Ahrar Al-Sham and Harakat Nouriddeen Al-Zinki in the process of its capture.

Following the capture of Markahalah, the Syrian Armed Forces and Lebanese Resistance turned their attention to the isolated village of Maryoudah, where they once again broke-through the Islamist rebel defenses and imposed full control over this area that is located directly south of Al-‘Eis.

In the last 48 hours, the Syrian Armed Forces and Hezbollah have captured 4 villages from Harakat Ahrar Al-Sham and Harakat Nouriddeen Al-Zinki, while only conceding the village of Talaylat to the Islamist rebels after a violent firefight at the strategic city of Al-Hadher.

COMMENTARY: Beyond the obvious symbolism and morale boost generated by the relief  Kuweiris Airbase, these multi-pronged Syrian pro-government attacks carried out with Russian/Iranian/Lebanese/Iraqi support are exacting a toll on Al-Qaeda (AQ), AQ-linked armed groups and ISIL. Where Syrian pro-government forces had previously been disadvantaged in the war of attrition with aforementioned armed groups, now enabled by RuAF fire support from the air and ground support from Iran, Iraq and Lebanon, Syrian pro-government forces appear to have wrested back the initiative in this four year-old conflict. What's more, these military gains are sure to play out in the diplomatic sphere when conflict resolution talks resume on 14NOV15 in Vienna, Austria.

It must be said the Russians enjoy the advantage over the United States in possessing reliable ground force partners in the war against Al Qaeda and ISIL in Syria. The reliable ground partner of the United States in this conflict consists of Kurds, where a NATO ally provides limitations on the utility of this force as does its ethnic composition in advancing into Arab regions.

There also exists another Russian advantage in that Syrian pro-government forces rally behind the Baath government. This is in contrast to neighboring Iraq, where the United States is enmeshed in intra-Shia political struggles, as well as attempting to re-enfranchise the Sunni populace. 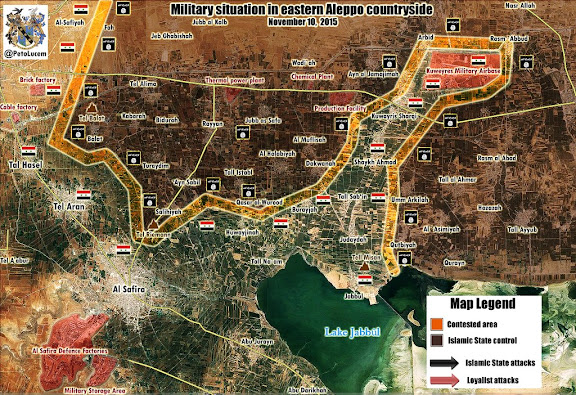 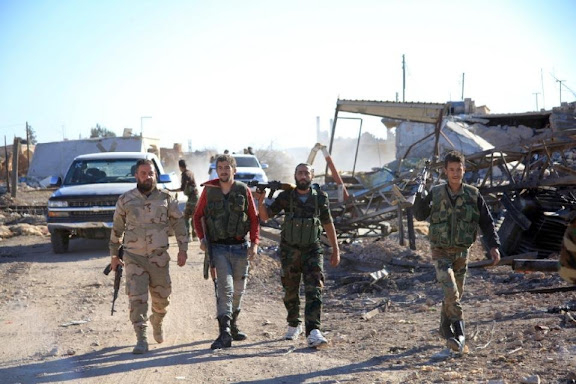 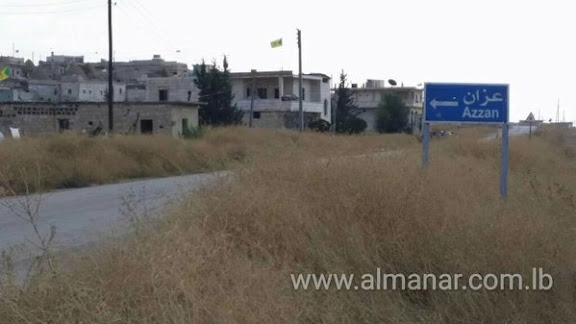 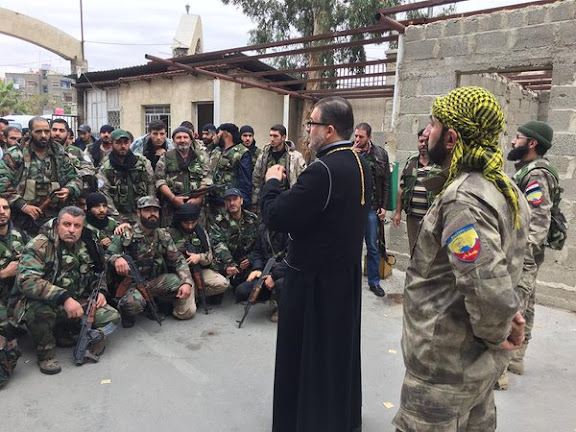 Fr. Gabriel Dawood, a Syriac Orthodox priest of the Cathedral of St. George in Damascus, with Syrian pro-government Sootoro (Gozarto Protection Force) light infantrymen at the ancient village of Sadad in Homs Governorate. 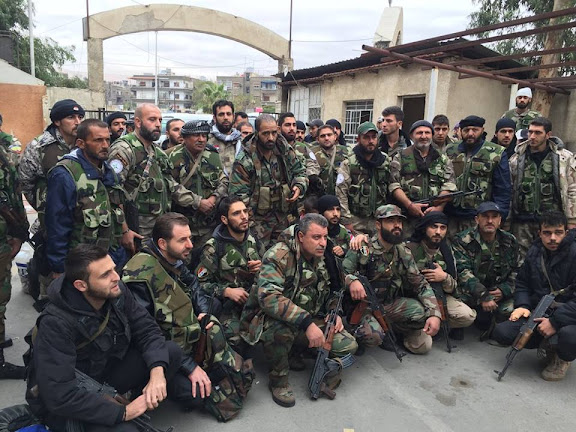 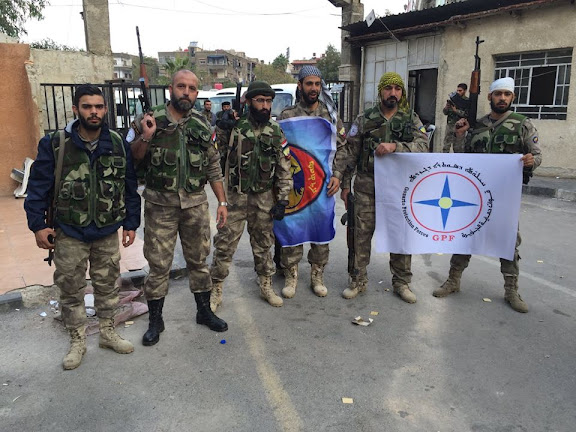 Flags of the Syrian pro-government Sootoro (Gozarto Protection Force) Christian fighting force, composed of members of the Assyrian/Syriac and some members of the Armenian communities in Syria. 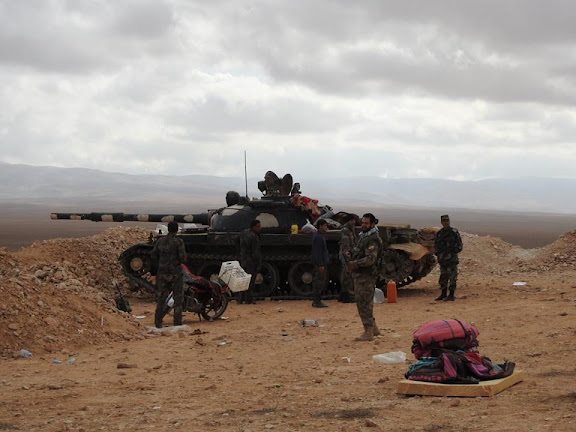 
Hammer into anvil during 2015 Syrian Offensive: RuAF airstrikes and the Syrian pro-government ground force partners.
Posted by Mark Pyruz at 2:03 AM

Apologies, there are also significant military developments taking place at southern Saudi Arabia and Yemen but I haven't had time to render a brief perspective on the subject. Hope to do so soon.

This was a very well executed combined arms operation and kudos to all and harbinger of things to come.

Will be most appreciative when it arrives Mark. Have been wondering about how the GCC has been getting on in a land where people live and die in the dust and heat of the Arabian Peninsular. By the words of, as they see it, the prophet. Without air conditioned shopping mall's to distract them till the afternoon matinee of stonings, beheadings and possible crucifictions, i worry that they might forget to help there Sunni brethren in Iraq and Syria rid themselves of a travesty. I also hope Ansrullah and Saleh pull these Houti fanatics into line aswell.