Russo-Iranian backed Syrian offensive gains during the past 72 hours, as detailed by Al-Masdar News (the Arab Source): 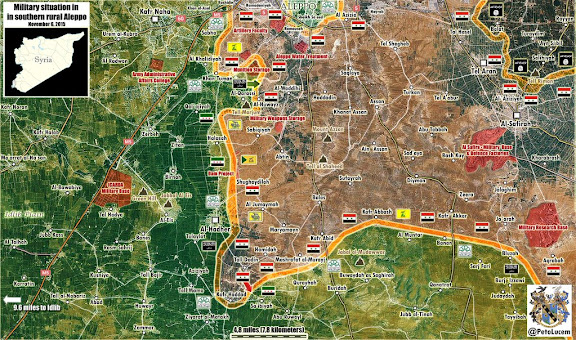 According to a battlefield report from a local source in Al-Safira, the Syrian Arab Army’s 4th Division, Hezbollah, and their allies stormed the Islamist rebel defenses at Kafr Haddad this morning, resulting in a long and fierce battle for its control.

However, Jabhat Al-Nusra, Harakat Nouriddeen Al-Zinki, Liwaa Suqour Al-Sham, and Harakat Ahrar Al-Sham were unable to withstand the aerial assault from the Russian and Syrian Air Forces, as their airstrikes forced the aforementioned Islamist rebels to withdraw to Dalameh, which is located directly east of Kafr Haddad.

With the capture of Kafr Haddad today, the Syrian Armed Forces and Lebanese Resistance have now expanded their territorial gains in southern Aleppo to 240km in only 35 days, while also entering the Idlib Governorate.

The capture of Kafr Haddad marks the first time in three years that the Syrian Armed Forces have entered the northeastern countryside of the Idlib Governorate. 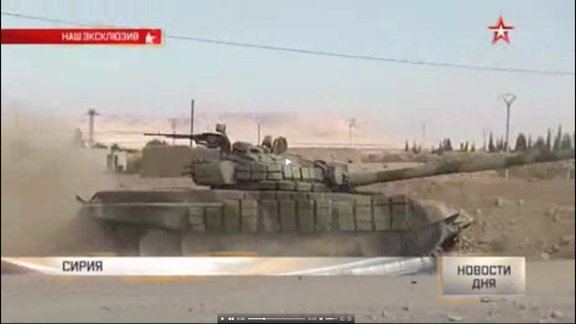 
On On [the morning of 07NOV15], the Syrian Arab Army’s 67th Brigade of the 18th Tank Division – in coordination with Kataebat Al-Ba’ath (Al-Ba’ath Battalions) and the National Defense Forces of Homs City advanced from the eastern groves of Al-Bayarat to the Palmyra Drivers School after a week of intense firefights with the ISIS terrorists.

North of Palmyra, the Syrian Arab Army’s “Panther Brigades” (Tiger Forces ) conducted military operations along the seasonal road from the town of Jazal to Palmyra, killing several ISIS terrorists in the process.

The northern flank of Palmyra has been the most volatile for the Syrian Armed Forces, as ISIS has launched several attacks on their positions in the Jazal Mountain area.

However, the Syrian Armed Forces in the Palmyra Triangle received a substantial boost on Friday, when a large convoy of reinforcements arrived at the T-4 Airport in order to participate in the upcoming Palmyra offensive that is only in its preliminary stages. 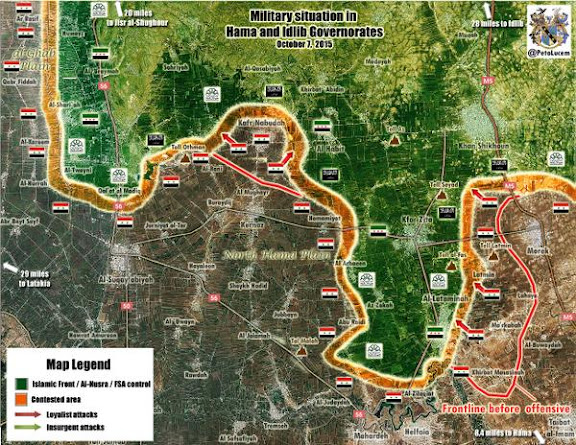 
On [the night of 07NOV15], the Syrian Arab Army’s 45th Regiment of the 1st Armored Division – in coordination with the National Defense Forces (NDF) of Joureen and the Syrian Social Nationalist Party (SSNP) – reportedly captured 4 villages on the western rim of the Al-Ghaab Plains after a series of intense firefights with the Islamist rebels from Harakat Ahrar Al-Sham, the Free Syrian Army’s “Liwaa Suqour Al-Ghaab”, and the Syrian Al-Qaeda group “Jabhat Al-Nusra.”

With the capture of these 4 villages, the Syrian Armed Forces are steadily building their protective wall along the Latakia Governorate’s eastern border with the Al-Ghaab Plains of the Hama Governorate; however, as long as the Islamist rebels control the strategic city of Jisr Al-Shughour in the Idlib, the Latakia border will not be safe.

Should the Syrian Armed Forces capture the imperative town of Al-Sirmaniyah at the northwestern part of the Al-Ghaab Plains, they will have positioned themselves at the southern flank of Jisr Al-Shughour. 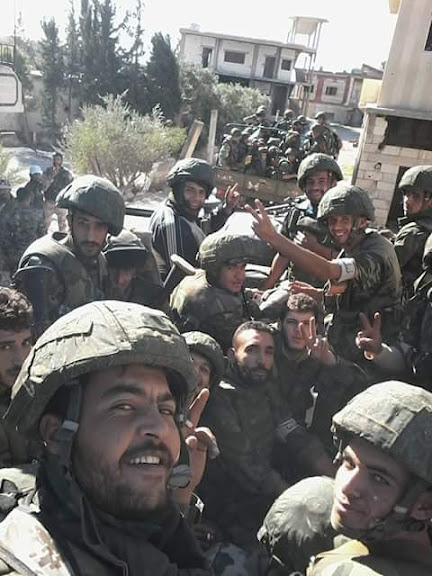 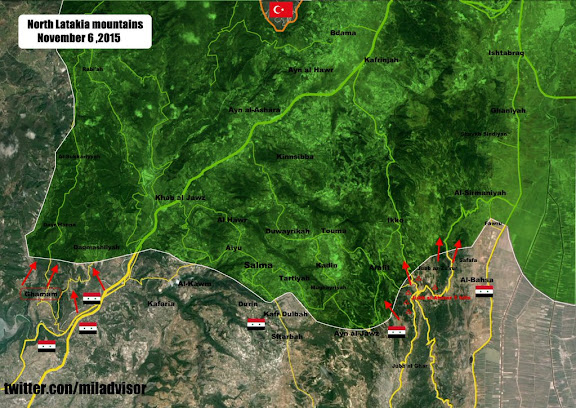 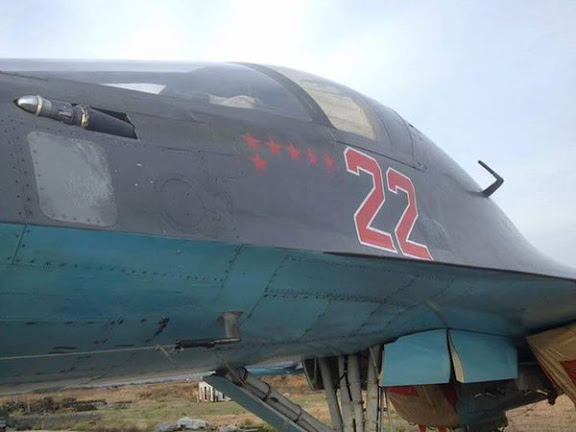 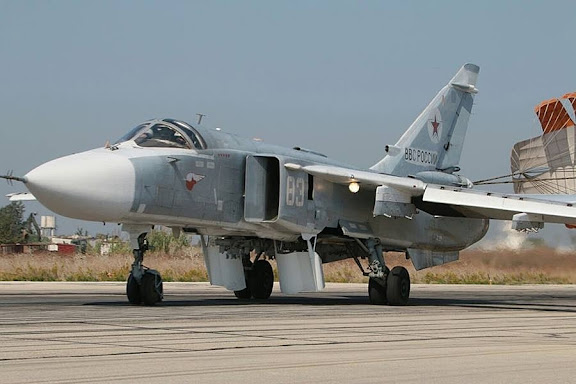 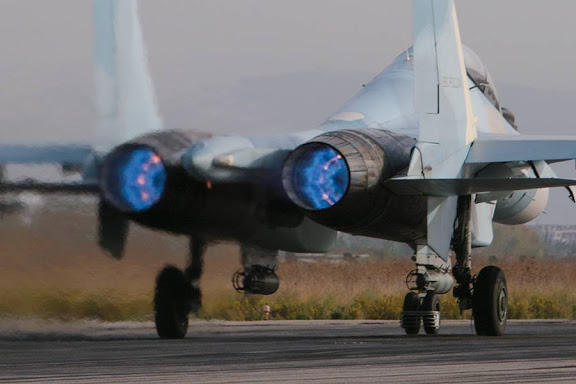 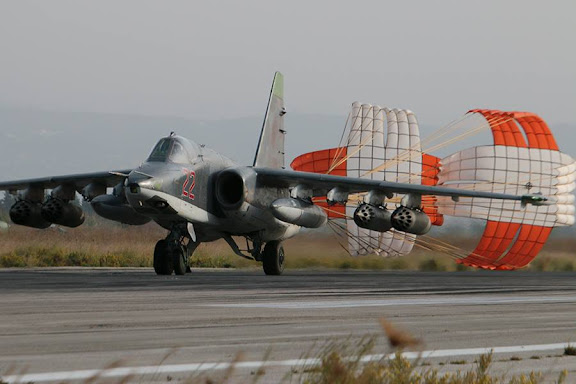 Above maps can be clicked to enlarge.

how many Iranians will die fighting for the Assad dictatorship that will never regain control of Syria?

now we can understand why irainan casualties rising
if you are going from defensiv to offensiv, you loose much more soldiers

Tall Mamu, Aziziyah and Tulaylat have now been captured too by IRGC-led groups.

Your understanding is not correct. Iran-led operations in Syria were always offensive in nature, against the opposition forces. Until the Russian entry last month, the Iranian role was basically assist and advise, with advisers sometime pulled into combat situation. Last month, Iran began direct combat operations near Aleppo, meaning IRGC servicemen and officers were directly and by plan involved in combat, hence the significant spike in casualties. The difference between primarily advising role to direct combat.

The number of casualties as compared to the relatively small number of IRGC-GF troops deployed is, however, rather high. Tactics and equipment could be the cause of a higher casualty ratio than expected.

Nader UskowiNovember 8, 2015 at 10:05 AM
Or it could mean that they are deployed as the spearhead of the advance and as such are right in the thick of the fighting so frankly these numbers of casualties are not really a surprise especially when coupled with the tendency of the iranian officers to lead from the front,anyone who expected the terrorists to just crumble at the first sign of the offensive is pretty naive,these groups are not to be underestimated altho it now seems like the offensive has finally gained traction and is picking up some steam.

Of course for some commentators like yourself all is normal all the time. If the monthly casualties were averaging 1 or 2 in the past 4.5 years, that was normal. If it was 42 in the last month, it's normal. And if hopefully go down to 5-6 a month, that would also be normal. You will not come back telling us that the reasons casualties came down was that the Iranian officers decided not to lead from the front.

The reality is the nature of Iranian military involvement in Syria is changing. The casualties are too high for the past four weeks, as the military needs to adjust to its new role as full combat units, and will start going down as they adjust their tactics facing a determined enemy using asymmetric warfare tactics, like the use of tunnels and IEDs.