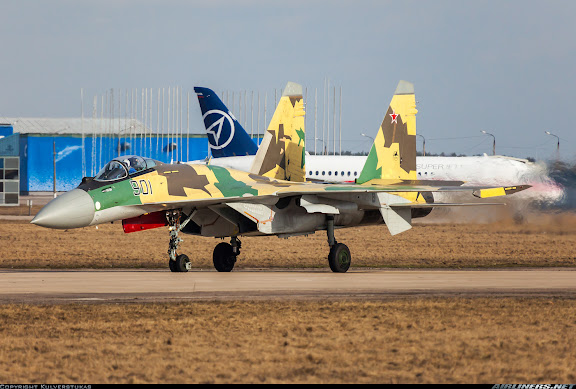 
China will buy 24 Sukhoi Su-35 fighter jets from Russia in a deal worth more than $2 billion, an industry source told Reuters on Thursday…

The deal makes China the first foreign buyer of the Su-35, one of Russia's most advanced military aircraft, and is one of the largest contracts for military jets ever signed between the two countries.

This included the AL-41F-1S engine that powers the Su-35, United Engine Corp said in a statement.

While the sale had been in the works for some time now, still it can be said the Russian intervention in Syria serves Russian arms manufacturers with an effective marketing tool being generated in the form of publicity on mainstream media outlets covering the war. 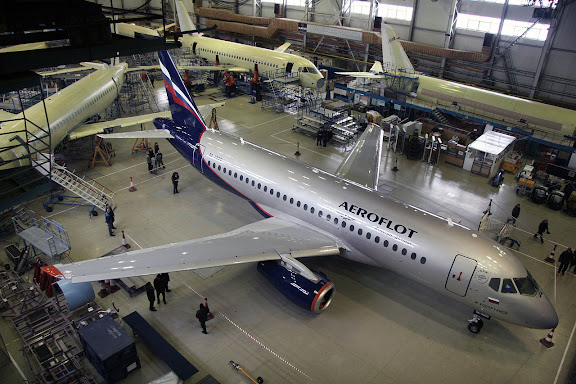 According to PressTV, dated 19NOV15:


Russian officials say the country is negotiating with Iran over the local production of the Sukhoi Superjet 100 (SSJ 100) airliner to replace the ageing Iranian fleet on regional routes.

Rogozin told the Russian media that the batch could comprise about 100 planes.

The planes can be in part be localized by Iranian producers if Tehran makes the political decision to purchase ready-made aircraft, he told Rossiya 24 TV during a two-day trip to Iran.

Sukhoi Superjet 100 is Russia’s newest twin-engine regional passenger aircraft which began operating commercially in 2011. More than 60 aircraft are in service with airlines in Laos, Mexico, and Russia.

Last month, France-KLM's CityJet signed a deal with Sukhoi to purchase 15 SSJ 100 planes worth over $1 billion. Sukhoi has also sold three SSJ 100s to Thailand and one to Kazakhstan.

COMMENTARY: It must be stated the favorite in the sale of this class of aircraft has to be the Airbus A320 series, for it's no secret the Iranians perceive the prize of the nuclear agreement in the form of renewed access to purchasing European hi-tech products such as commercial aircraft. President Rouhani even alluded to this, prior to his trip to Paris being postponed due to the national emergency currently gripping France.

Very unfortunate that the Boeing 737 series will likely be ineligible for Iranian purchase due to American domestic politics, and the history of U.S.-enforced sanctions directed againstg Iran's commercial airline industry.

Were the Iranians to purchase the Sukhoi Superjet 100, this would provide yet another boost to Russia's Russia's JSC United Aircraft Corporation (UAC).
Posted by Mark Pyruz at 1:46 AM

Iran should be seeking the SU-35 not the civilian transports.

Iran should be seeking local production of both types

If they reach an agreement for local production, it would be ideal. First for technology transfer and second for employment. Too many western companies participated in designing SU-100 super jet therefore it can be considered an aircraft with updated western technology. Having said that before any purchase Iranian Aviation Organization must carry out comprehensive studies analyzing if it is suitable for Iranian climate to avoid making the same mistake they made about AN-140. If they buy 100 air craft and finalize the deal, Russians may not be interested establishing a joint manufacturing facility in Iran therefore it would be wise to make purchase conditional to domestic joint production and technology transfer.

"Were the Iranians to purchase" the western Airbuses only, they wouldn't have long time benefits of a largr scale license manufacturing, like the Russians are proposing.....

Until Iran masters this technology, which it still hasn't, it should import modern aircraft, both military and civilian, to replace its aging fleet. I'm not sure whether Ali Khamenei will allow this, but I know he should.

I agree, but Russian agreement to your proposal is anything but certain.

Sure:
Boeing 737 = one of the most used civilian passenger aircrafts in the world with the greatest track record and tens of operators
SU100 = Untested flying horse which crashed during its demonstration flight
https://en.wikipedia.org/wiki/Mount_Salak_Sukhoi_Superjet_100_crash

But of course...right now the entire Iranian nation is a big test laboratory for all kinds of Russian and Chinese products...looking forward to seeing Iran breaking from this isolation!

It may take couple decades to implement complete licenses to built domestically a jetliner fuselage, its equipment and complete engines...., but for those who will criticize that it will start with assembly lines, there is an argument that Iran will gradually create and train new specialists and cadres, which in the future create their own designs. It has taken others; including Boeing, almost 90 years to reach the levels they have now.

Show them money, they sell their mothers too.

mig-29 (or 35 if you want to call them that) seems a better investment then the SU-35. If only because the iranian air force has had the time to start locally producing some parts of the jet. Going for the SU-35 might get you the most modern option upfront, but it means restarting your R&D at the starting point. The mig-29/35 is a decent 4.5 generation fighter and is already known by technicians and pilots of the air force. Not only that, but its lower price would allow Iran to buy more of them, a very useful advantage when one considers Iran's asymmetric strategy. The bigger number of fighters buyable with the same budget would also allow the fleet to stay longer in the air were Iran to face a procurement situation similar to the one it is in right now.

Just consider how long it took Iran to truly master the american aircafts it operates, if it takes it so long to master the SU-35, you're left with a very long gap where Iran is dependent on external producers for its needs.

Although I agree that Iran should be looking at all the options available to it, especially the Migs, I'm not sure Irans experience with their 80's-90's MIG-29's will be relevant whether they go sukhoi or Mig. Machine tools and parts manufacture.... industry would favor MIG. Pilot training and new weapons and defensive technology would be a whole new ball game regardless. We should bare in mind that Russia's aircraft manufacturing is at its near full capacity, taking care of its own urgent requirements. And needing finance. This will bode well for Iran as it lends itself to licence built in Iran. Whether Sukhoi or MIG. I wouldn't expect more than a 4th generation model and some tips. Russia now has its own and 24 Chinese SU-35's to build. I think Anonymous 3.41pm makes a good point regarding Irans military strategies. A few hundred new build Mig 29/31 Su-24/27/30's should be a priority.