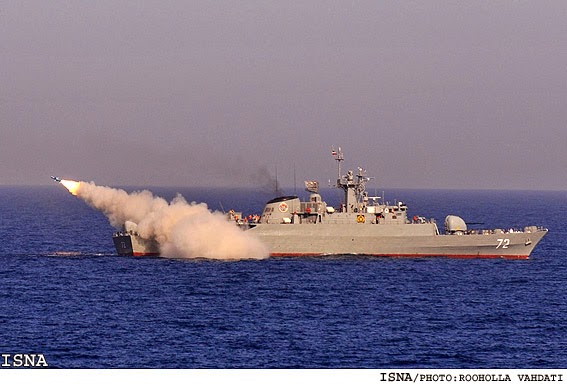 The Iranian Navy said it has deployed warships to the Gulf of Aden on Wednesday on a mission to protect shipping from piracy. The move puts Iranian warships off the Yemeni coast during the escalation of conflict in the country. The Huthis insurgents have taking control of Yemen’s major cities by force, prompting Saudi-led coalition airstrikes and fears of expansion of the conflict.

Iran is the main supporter of the Huthis. Today, Secretary of State John Kerry said during a PBS interview that Iran supplies arms to the Huthis, including through regular flights to Yemen. (PBS NewsHour, 8 April)

Do you think the Iranian Navy would actually try to break the siege with only two ships and therefore supply the Houthis with arms?

I have not seen reports of a naval blockade of Yemeni ports by Saudi-led coalition as of yet. If they do the siege, an Iranian frigate probably cannot break it.

But this is what Saudi Arabia has been saying for two weeks now, that Yemen is under a naval blockade and that any attempt by "any state" to supply the Houthis with arms would be met with military action.

Now I know the Iranian Navy regularly conducts missions at the Gulf of Aden but Sayyari said they're going to stay there for 3 months. Does this sound "regular" to you?

Not to forget about Iranian submarines.

Maybe not, but attacking a relief ship in an open port under no UN resolution blockade or sanctions would be an act of piracy and war, and Iran or any nation is fully entitlement to retaliate under UN charter. I am surprised Russia and China have not been more forceful and should send in a few ships with relief supplies to Aden. Let the Saudis and their mercenary pilots hit a Russian ship and see the consequences?

If not by sea and air can it be assumed the Houthis have no land conduits via Oman? Has there been any reports of Iranian flights, civilian or otherwise since the GCC airstrikes? If there was to be an Iranian airlift of sorts how likely would it be, that the GCC would challenge the Iranian aircraft.? Seems a possible scenario in the coming days or weeks...... that could spark an appalling escalation! Would Imagine Iran would like to consolidate this nuclear agreement. Imagine the GCC would certainly not like to see Iran do so.

50 year old ship made by england that wasn't even the best english ship when it was made, never mind today.

Piruz, nothing in and around Yemen is normal these days.

If you mean Iranian ships, they are updated by new missiles, torpedoes, radars and new electronics. They are smart enough not to send an under equipped vessel into harms way. Moreover this is just a gesture to show their presence there otherwise they would have sent an armada.

Obviously Iran is not sending ships to that region without coordination with China or Russia. Let us see what the commander of Iranian Navy said when asked about the conflict in the region:
"Sayyari underlined that Iran doesn't allow anyone to drive out its fleet of warships from the international waters."

This would be a good message to the other side that Iran Navy will be in that region no matter what. Someone is saying ships are 50 years old...that might be correct....but believe me the weaponry is not 50 years old....

anon 12:08 am ...china has its hands full in the waters around them constantly tied down by massive US as well as Allied fleet so could in no way spare any ships not to mention they have no sympathy for akhoond expansionist plans...and neither Russia nor China find it the least bit interesting to do akhoonds dirty work in Yemen as the houthis are akhoonds brainchild...akhoond must bear the full brunt of consequences on their own...they will soon understand the wrongs of their malicious policy of stirring problems on sovereign territory of neighbours...and in fact a crushing response from the Allied and GCC forces would teach them a lesson...

That is expected ill-informed hyperbole and the illegal assault by Saudis on Yemen has failed. Even Pakistan is now calling for a negotiated settlement. This has been the most humiliating outcome for the Saudis since they lost over 139 dead and 8 villages occupied by the Zaidis. This has really been a disaster for Saudis and now they have an eternal tough enemy on the Southern borders.

Iranian ships off the coast of Yemen are "gestures" I agree. The 'Corvette', "light Frigate' is of Dutch manufacture not British. Ex-Vosper class. Old. Not Fifty years old. Modernised. Very capable, yet not commanded by fools. Iran's maritime power visa versa the GCC is in the Gulf. Its always been called the Persian gulf as far as I'm concerned. Um, Russia and China won't be making it to this one just yet. As a terribly frightened westerner, I gotta say compared to our allies I really like Iran. Not so much the supreme leader but. I would say the three best democracy's in the near east in order are Turkey followed by Iran and then Israel. Tunisia holding firm too! Would like to see the muslim brotherhood legalised in Egypt again!

@interested party.You know what the definition of "supreme leader"is? It's just another word for dictator.
That makes Iran a theocracy ruled by a religious dictator. So it's not a democracy but a religious dictatorial theocracy with the unelected supreme leader at the helm who makes all the life and death decisions over the Iranian nation. He also decides which candidates should be allowed to stand for the mock selection process as the next powerless president. So there remains only two countries which are democratic,Turkey and Israel. The muslim brotherhood are the same lot like the ones in power in Iran.Once they have the power they just like to hold on to it for ever.The Egyption army and the people who had the forsight did the right thing. Number one rule,never mix politics with religion.Nothing good comes out of it.

I guess in your esteemed estimation Sisi is a great democrat then?

No I don't consider Sisi as a "democrat" let alone a "great" one. But what ever he is the regime that he heads is hell of a lot better than the muslim brotherhood types with their self righteous and ignorant behaviour towards non muslims and secularists. Religion should stay out of politics and stay out of interfering in peoples daily lives.It must remain a personal choice.Not for some priests to use for personal enrichment and power mongering like it is in todays Iran.