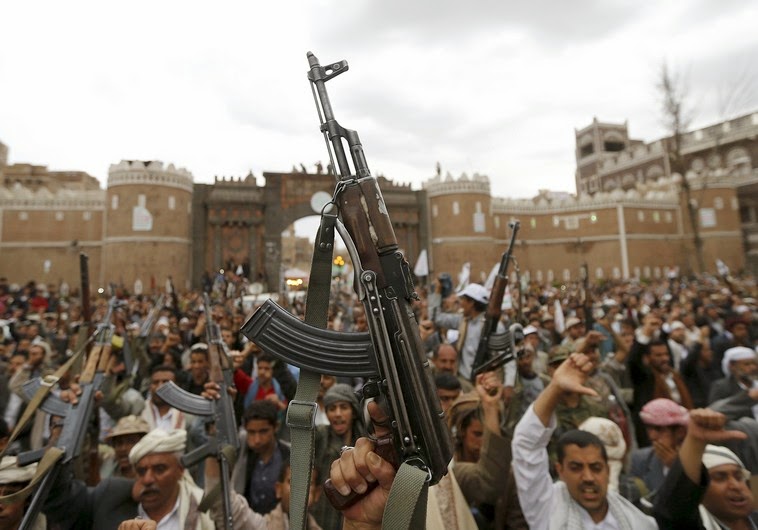 Reuters reported today that a local militia spokesman in the southern Yemeni port city of Aden says that their fighters have captured two IRGC officers, one a full colonel and another a captain. Local anti-Huthi militiamen say the officers were captured during heavy fighting on Friday evening in two different districts in Aden. They say the officers belong to IRGC’s Quds Force and were working as military advisers to the Huthi fighters.

“(The Iranian officers) have been put in a safe place and we will turn them over to Decisive Storm (Saudi-led coalition) to deal with them,” said the militia spokesman. (Reuters, 11 April)

The militiamen did not provide any evidence, like the photos of the captured officers, to back up their claim.

Heavy Saudi-led airstrikes and ground combat between opposing armed militias continued in Aden on Saturday. The war, which started when the Huthis (AnsarAllah) insurgents captured the capital Sanaa and began their march toward Aden, with Saudi-led coalition launching the Operation Decisive Storm to stop their advance, threatens to turn Yemen into a failed state and spread sectarian conflict in the region.

If the news of the capture of the Quds Force by anti-Huthi militia were conformed, it would deepen tensions between Tehran and Riyadh. Iran has denied the presence of its officers and military advisers in Yemen, but the Saudis accuse the Iranians of supporting the Huthi in their military takeover of the country.

The Huthis, or AnsarAllah, insurgents are predominantly followers of Zaydi Shia, a religious sect that emerged in the eighth century out of Shia Islam, and today constitute about 40 percent of Yemen’s population, where the Sunnis are in majority.

UPDATE: An image circulated in social media on Saturday night is reported as one of the two Iranians captured in Aden.

It would be so bloody embracing for Iran if its officers were to be handed over to the "underdeveloped", "unworthy" state of Saudi Arabia (as some Iranian officials refer to it) hehe!

I don't know if the Saudis are willing to go that far at provoking Iran.

There is also a claim two IRGC soldiers or advisors KIA yesterday in the northern region of Saada Governorate.

Sounds like usual desperate psy-ops. Two Iranian officers with no support or escorts in a Arabic speaking battle zone is highly unlikely. The Saudis do indeed have mercenaries supporting the Sunni tribes around Aden and this may be just a deflection of the Saudi role. The Zaidis and Saleh's Republican Guard don't need "military advise" from anyone, let alone Iran, they have been fighting for decades and know the terrain better than the backs of their hands. Saudis are facing utter humiliation and defeat so Iran is convenient bogeyman.

The Captain's name is Shahpour and the Colonel's name is Asefzadeh...Akhoond regime is in full denial mode...we know what that means. They will now be forgotten, left to their fate, sacrificed for Velayat-e-faqih. Nothing personal, just politics...

do you sincerely believe all that you wrote in that comment?

do you really think that Iran isn't knee-deep in Yemen and hasn't been supplying and advising the Houthis for years?