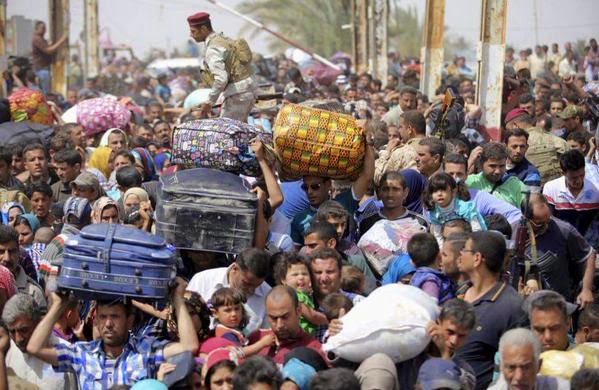 Thousands of families are fleeing Iraq’s western city of Ramadi toward Baghdad as ISIL fighters advance toward the center of the city.

“A column of traffic several vehicles wide snaked for miles at a checkpoint on the edge of Baghdad province, as minibuses, cars and trucks picked up families who crossed by foot carrying their possessions in bags and wheelbarrows,” a Washington Post reporter described the human disaster unfolding in Iraq.

People arriving Friday in the checkpoint included Ramadi police officers who told Washington Post reporter that they had left their positions “after other security forces retreated.” (The Washington Post, 17 April)

Brigadier General Tahseen Ibrahim, a spokesman for Iraq’s Ministry of Defense, said reinforcement and counterterrorism units have been deployed to Ramadi.

ISIS made temporary gains over the past 24-48 hours. However the ISIS offensive was halted very recently by Iraqi security forces who were alerted to ISIS advancements, and now ISIS fighters have been pushed out of Ramadi proper. Their remaining fighters have retreated to nearby villages.

https://www.youtube.com/watch?v=xviegly-elk --- Under siege from Islamic State in Ramadi.

Does anybody know if there is any relationship between Heydar Alebadi's recent meeting with Obama and finding/killing of Izzat Ibrahim al-Douri and recent assault to Ramadi by ISIS? Is there effective US air support ofr just a show off? Can Iraqi security forces handle the crises without the help of shiite militias?

Where are all the Israel bashers now? More palestinians are being killed by ISIL and Assad's forces in one week than Israel has for over sixty years. It's laughable how the Islamic regime is funding Assad to throw barrel bombs over the very people they claim to support. Time for Iran to stop funding all these terrorist money grabbers and start thinking about its own population.Or is that to much to ask?

Israel along with KSA are on borrowed time mate. Both are fighting a war for legitimacy now, more than anything else. All this ISIL, Nusra, FSA drama has run its course and ended in failure.

If Iran's obvious ascendancy was not noticeable by the hillbilly in Washington, there no way in hell they'd ever negotiate with Iran.

For Iran, all its neighbors are thoroughly incompetent and weak states. It was only a matter of time all these countries fell under Iran's control. KSA is a house of cards..........destined to fall.

Syria is the depth of Iran's regime's security, therefore they continue supporting Assad as you mentioned it is too much to ask not doing so . I am not agree with you about killing of Palestinians by Assad's force. Assad as a president of his country must fight to defeat takfiri terrorists for his people and for for his country. It is unfortunate that Palestinians living in Syrian lands and being killed by ongoing fighting between ISIL and Syrian forces. But my friend, you should remember that Assad's regime was a good host for Palestinian refugees for all these years. It was Palestinians who turn their back to him after so called Arab spring. This is not the way you appreciate your host. Recently PLO/Fatah refused to send any forces to help to its own people against ISIL in Yarmuk. Regarding killing of Palestinians by Assad's regime more than Israel, again I must disagree with you, just look at death and destruction of recent Ghaza war by Israel you see it is not comparable to Yarmuk.

Anon 9:25 AM
Sorry to burst your bubble mate. Israel will still be here long time after Islamic regime has long gone. I'm willing to bet money on it.

People used to say Islamic regime will be gone this year since 1357 but it is still here after 37 years. It is in Israel that reverse immigration has started and people going to Germany and other western countries.

It is because, they do not feel secure in Israel anymore. So many of the Jews migrated to Israel in 1990s especially those with some degree of education and experience, from eastern Europe countries after the collapse of soviet union, migrated to North America after spending some time in Israel.

Anon 7:48 PM
I liken Iran to a bus full of innocent passegers that has been hijacked by a armed maniac with a gun.People will do as they are told by this threatening gun toting terrorist. But eventually the self deluded gunmen will make a mistake which will lead to his demise. Therefore I am willing to bet that the Islamic regime will disappear long before the state Israel.The signs are already there.