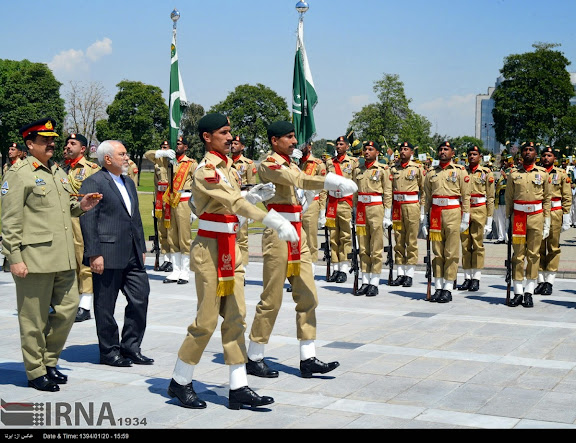 According to Dunya News:

Focus of the discussion remained on regional security including evolving situation in the Middle East, Pak-Iran border management and defence and security cooperation between both the countries, the ISPR reported.

COMMENTARY: No doubt, Foreign Ministyer Zarif has much to talk about with Pakistani military and political figures, given reports that Saudi Arabia is pressuring Pakistan to join its military intervention in Yemen, as well as Iran's loss of eight NAJA border-protection guards killed in clashes with Jaish al Adal at the Pakistani border within Sistan-Baluchestan province.

Pakistan's parliament on 10APR15 adopted a resolution on Yemen calling on all factions to resolve their differences peacefully and urging that Pakistan should stay neutral. [source: Reuters] 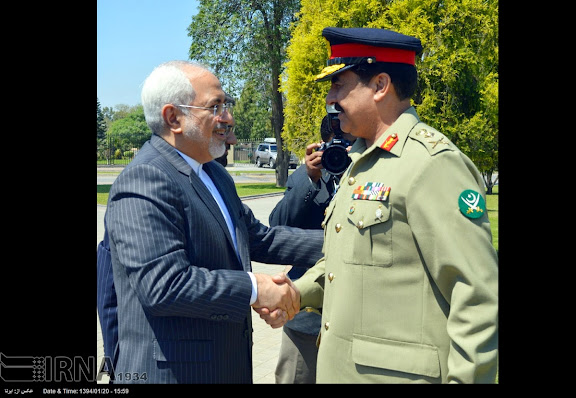 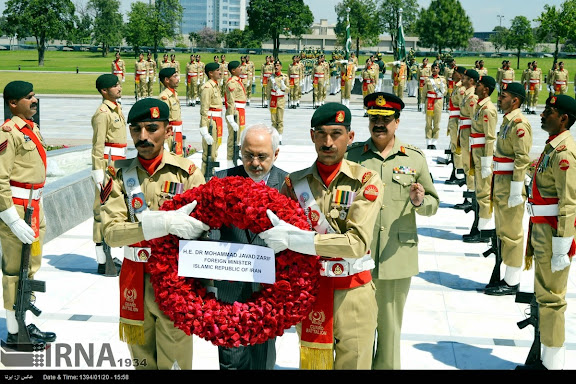 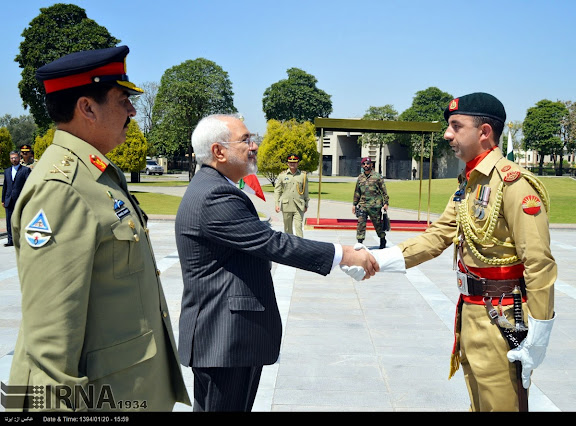 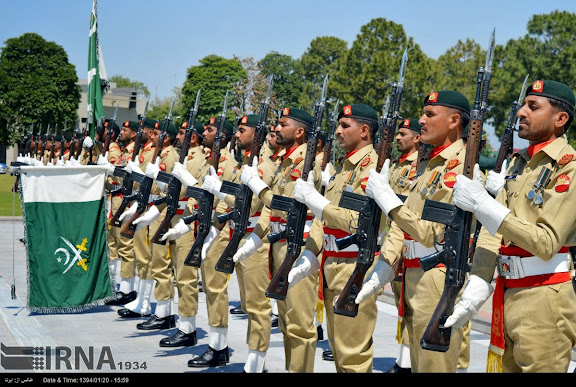 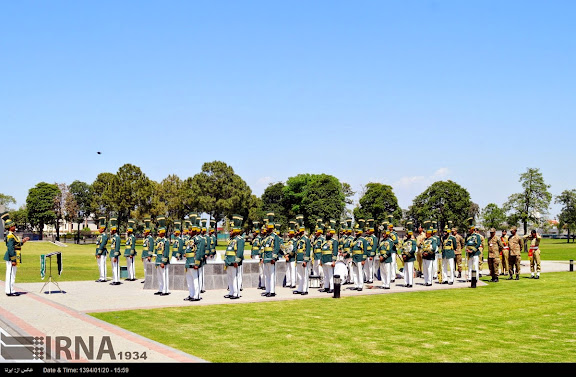 Pakistan's army is over 30% Shia and airforce over 50% and the Saudis would have split the army and a revolt would have ensued as they were asking for only "Sunni officers and men". That would have been a disaster for already embattled Pakistan. Iran handled the whole situation with cool diplomacy as most Pakistanis are pro-Iran anyway considering the historic cultural, linguistic and military ties. Saudi Arabia has been exposed as fanning sectarianism at all levels and luckily the Pakistanis rejected it.

Excellent work done by Zarif....first these pix at Army General HQ in Pakistan and then the declaration of neutrality...Bravo!
Now the Saudis must be depressed!

The Pakistani parliament vote on Yemen was balanced. It did state Pakistan's neutrality in the current conflict, as was widely reported here and elsewhere. It also sent a strong message to the Huthis (AnsarAllah) not to cross into Saudi territory, one of their stated goals. It pledged to defend the kingdom in case of any violation of its territorial integrity or threat to holy sites in Mecca and Medina.

I would like to say that's not right to say the percentage of Shia and Suni in Pakistan Army Pakistani Soldiers will not fight for a single inch beyond it's territory .Pakistan Army is already engaged in war against terrorism and after the Indian PM Modi came in this office the work load of Pakistan's military has increased. But still Pakistan will help Saudi Kingdom yet Saudi kingdom is in offensive approach. My question is that Why they are not seeking help from America a biggest Alliance of Saudi Kingdom???

What do you mean?

I mean is this the result of diplomatic efforts between Iran and its neighbors (Pakistan and Turkey)? Because even Turkey has stated that it now "agrees with Iran that the crises in Yemen should be resolved peacefully" only two weeks after Erdogan openly lashed out at Iran for "trying to dominate the region".

Either this whole "regional Sunni alliance" against Shia Iran was a hype and there is in fact no shared strategic point of view between Sunni states regarding Iran (for many reasons, including geography and economics), or they're just gesturing to see if Iran is ready to make concessions after facing the reality of a regional alliance against it in Yemen.

What do you think?

The Pakistani parliament vote was a response to KSA request of joining in the Yemen conflict on the side of the Saudi-led coalition. That the defense of KSA against a potential invasion was identified could be seen more as means of softening the blow of denial towards KSA's request, which had reportedly been seen as more urgent given the mixed results of the aerial bombardment, so far.

There was another huge pro-Ansarullah demonstration today in Sana'a. Things could potentially change, but so far similar observations of resolve seen in the past during aerial bombing campaigns directed at London in 1940 and Berlin in 1944 seem applicable.

Piruz, the Sunni coalition was formed foremost against the Huthis who had taken over Yemen by force, and were a considered a threat to the Saudis. Please note the Huthis themselves have said that their ultimate goal is defeating of the House of Saud and establishment of an Islamic caliphate (the Shia version) in Mecca and Medina.

Iran's involvement in Iraq and Syria never found the same sectarian dimension as in Yemen. In Syria, Iran is allied with an regime which is more secular than Shia. In Iraq, Iran found itself an ally of not only the Shia government in Baghdad, but also the Sunni Kurds and some Sunni Arab tribes and even the U.S. Unfortunately, in Yemen the lines are drawn in stark Shia-Sunni sectarian basis. The Shia Iran supporting the Shia Huthis, the Sunnis against the Huthis. This is a very dangerous situation and not good for Iran in the long term. Hence my question above. I don't see a diplomatic victory for the Islamic Republic to be so clearly identified in a sectarian framework as supporters of Huthis, a Shia minority wanting to rule over a predominantly Sunni country.

The Middle East is predominantly Sunni, and Iran will not gain by such identification. Let's hope diplomacy starts working now, with cooler heads prevailing, and a long-running religious war is avoided in Yemen.

On ineffectiveness of Saudi-led coalition airstrikes, I agree with you. They need to rethink their strategy. Bombing fixed targets against a very mobile enemy would not by itself change the dynamics on the ground. Unless they go for the very mobile targets as well, which I am not certain if they have the expertise and training for, and also use their aircraft in close ground support role, which would require ground operation. Let's hope we would never get to that level of conflict, and some peaceful resolution could be found. Religious wars cannot possibly have a winner. Any victory will be tactical, in the long term both sides lose.

As a military aviator with over 30 years experience, there has not been a single conflict since Kitty Hawk flight, that a land war has been won by air power, Vietnam, Iraq, Afghanistan and Korea may be quite illuminating. It may help to read the history of Yemeni tribes since the Queen of Sheba. They don't cotton to the idea of foreign invaders killing their kids and occupying their lands or dropping $ million laser bombs on their mud huts.