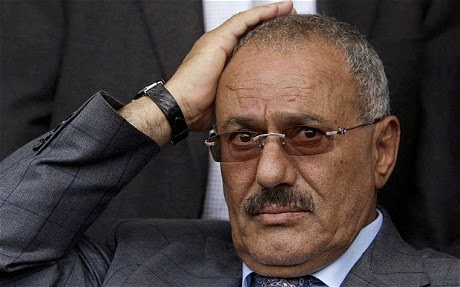 Ali Abdullah Saleh, the influential former president of Yemen, today called on the Huthis to accept the UN Security Council resolution on Yemen and withdraw from territories seized in months of fighting, so the Saudi-led airstrikes can end and reconciliation begin. Saleh has been a key ally of the Huthis during their insurgency.

Saleh still holds sway over army units that are now working with the Huthis. If those units halt their operations and retreat to their bases, the Huthis will be hard pressed to hold any terrain in Aden and surrounding areas, which are key to their plans to rule over the entire country.

“I call on (the Huthis) to accept all UN Security Council decisions and to implement them in return for a halt in the coalition forces’ aggression,” Saleh said in statement read on his Yemen Today television channel. “I urge them and everyone – militias and al-Qaeda as well as militias loyal to Hadi – to withdraw from all provinces, especially Aden.” (AFP, 24 April)

Saleh also called for UN-brokered Saudi-Yemeni talks to be held in Geneva.