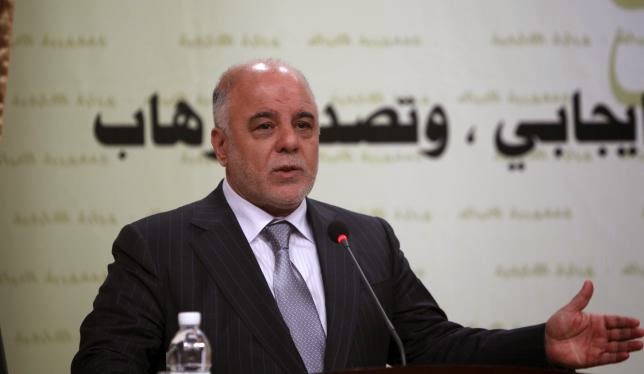 Iraqi Prime Minister Haider al-Abadi said today in Washington that the conflict in Yemen could consume the whole region. He added that after talks in Washington he believes that U.S. leaders shared his concerns and want to stop this conflict as soon as possible. Abadi met with President Obama on Tuesday at the White House.

“This (Yemen war) can engulf the whole region in another conflict,” Abadi said. “We don’t need another sectarian war in the region.” (Reuters, 15 April)

Abadi said convincing Saudi Arabia to halt its offensive in Yemen could be difficult. The Saudi-led alliance of ten Sunni countries is engaged in a three-week-old air campaign against the Shia Huthi (AnsarAllah) insurgents who are allied with Iran. They have taken over the capital Sanaa and have advanced to other parts of the country, including Aden, the capital of southern Yemen.

“From what I understand from the (Obama) administration, the Saudis are not helpful. They don’t want a ceasefire now,” Abadi said.

The White House, however, denied Obama had criticized Saudi Arabia in his talks with Abadi and renewed U.S. support for the anti-Huthi military campaign by the Saudi-led coalition.

“We firmly support current GCC-led operations… which is why we have been providing support for coalition operations,” said National Security Council spokesman Alistair Baskey. (Reuters, 15 April)