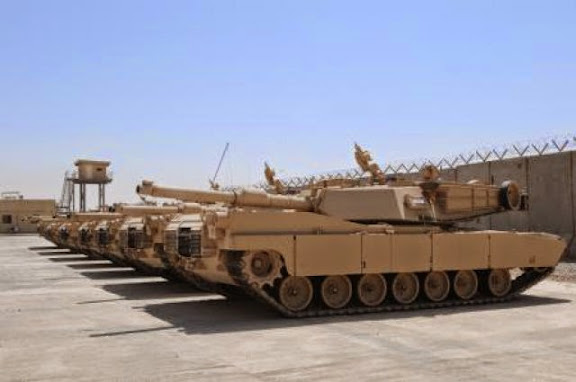 
"Arms, we need them all. If they [the United States] can supply us with heavy weapons, with tanks, we need them badly," Abadi told a small group of reporters ahead of talks with U.S. Defense Secretary Ash Carter.

Asked about when Baghdad would pay: "Iraq can pay for it later, not now... I think there can be an arrangement for deferred payment."

COMMENTARY: Photos below emerged 15APR15 on social media, of ISIL posing before knocked out Iraqi Army tanks during attacks in the vicinity of Baiji oil refinery: 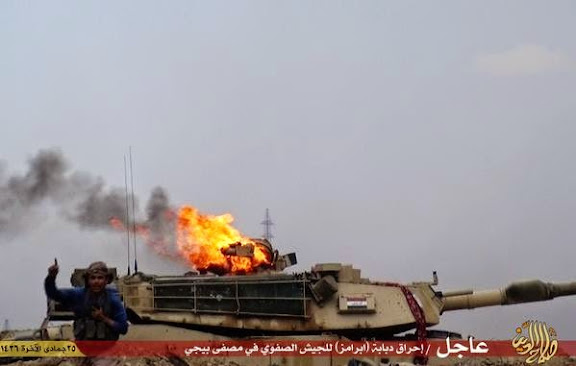 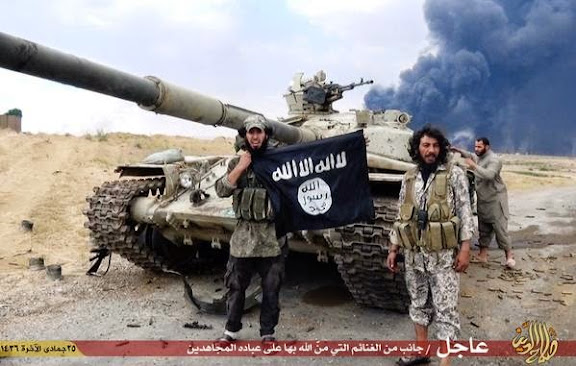 COMMENTARY: In the opinion of this writer, an unfortunate consequence of the command dispute during the final phase of the Battle of Tikrit is the enabling of ISIL again resuming the initiative, at Baiji and Ramadi. In marked contrast, scenes such as those above were not to be seen during the recent Salahaddin campaign.

Compounding this adverse turn of events, the New York Times reported the following:


The dueling Iraqi and Saudi narratives began when Prime Minister Haider al-Abadi of Iraq, who this week is making his first official visit to Washington, spoke early in the day to a small group of reporters at Blair House, the White House guest residence for visiting dignitaries. He said the Saudi campaign and the fighting in Yemen had created huge humanitarian problems.

“There is no logic to the operation at all in the first place,” Mr. Abadi said. “Mainly, the problem of Yemen is within Yemen.”

“They want to stop this conflict as soon as possible,” Mr. Abadi said. “What I understand from the [Obama] administration, the Saudis are not helpful on this. They don’t want a cease-fire now.”

“The dangerous thing is we don’t know what the Saudis want to do after this,” Mr. Abadi said. “Is Iraq within their radar? That’s very, very dangerous. The idea that you intervene in another state unprovoked just for regional ambition is wrong. Saddam has done it before. See what it has done to the country.”

COMMENTARY: There's a bit of "Mr. Smith Goes to Washington" in PM Abadi's remarks. That the Iraqis are traumatized by the Saddam years is beyond dispute. From their perspective they are still affected by Saddam's invasion of Iran, his invasion of Kuwait, Operation Iraqi Freedom, the insurgency against the U.S. military occupation and now the war against ISIL. To see the conflagoration now being generated by the sharp escalation embarked upon by their southern neighbor is having an effect on the Baghdad government, as demonstrated by Adadi's responses to reporters.

It's also unfortunate that Abadi's urgent request for tanks and heavy weapons serves as an echo of Iran-backed Badr President Amiri, in comments Amiri made during the Battle of Tikrit when photos appeared of Iranian T-72S main battle tanks being operated by elements of the Iraqi Army.

Turning again to the above imagery of burning Iraqi tanks, it is the opinion of this writer that the beneficiary of this tug of war between Iran and the United States over Iraq is ISIL. Such runs counter to the interests of both countries, and Iraq. 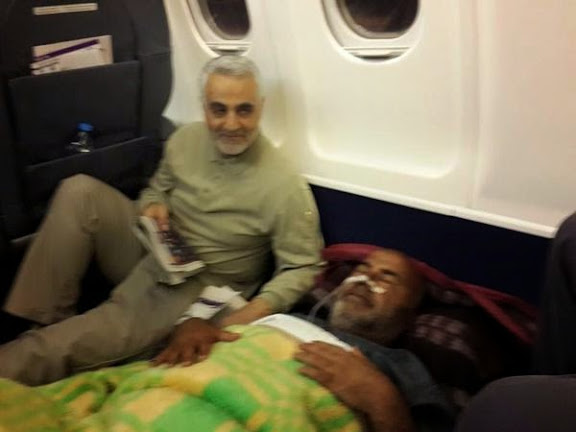 Image turning up this week on social media depicting IRGC-QF Commander Soleimani accompanying the air medical transport of Khadeer Al-Matrouhi, leader of "21st Brigade" who was reportedly WIA during Battle of Tikrit.
Posted by Mark Pyruz at 6:29 AM

The big problem the iraqis seem to have is their inability to keep their abrams maintained and functional not to mention the fact that it hasnt exactly performed all that well in iraqi service,I think the fact that iran had to supply t72s during the last offensives really says it all

Speaking of Iraqi Army tanks, I'm now using a more current Iraqi Army ORBAT enabling me to be more precise in determining unit markings on AFVs during the Battle of Tikrit. Posts recently amended include:

While I'd certainly prefer contracts and jobs for Lima Army Tank Plant (LATP), I concede the T-72 is probably a better fit for Iraqi Army servicemen, as well as Iraqi conditions. Less sophisticated, lighter, cheaper to field and less expensive procurement cost.

Buit what Abadi and other Iraqi military/militia leaders are clamoring for are replacement AFVs.

That, and they're desperate for F-16 deliveries. Had there been IqAF F-16IQs during the Battle of Tikrit, with trained Iraqi pilots, its possible the Iraqi Army wouldn't have felt compelled to request U.S. assistance. Plus, without an effective air force, Iraqi leadership is feeling vulnerable by the destruction being waged upon Yemen by the Saudi-led coalition's aerial bombardment of that country.

I suggest US should stopped supply Iraqi Army with M1A1M Abrams, M1151A1 w/B1 kits, MRAPS, M198 howitzer, and small fire arms. The Iraqi army would just run away and abandon them.

Kurdish Forces are in no position to absorb any of the advance weapon systems you just mentioned , and if they could , it'd only disrupt the delicate military balance in that region . There are other ways that we can help them to fend off ISIL or similar threats
The same goes for Iraqi Army , however it needs to spend billions of dollars to repair its military and civilian infrastructure .The immediate threat comes from ISIL-type groups .It's better to train elite groups of Iraqi military and SWAT in asymmetric warfare against terrorists .