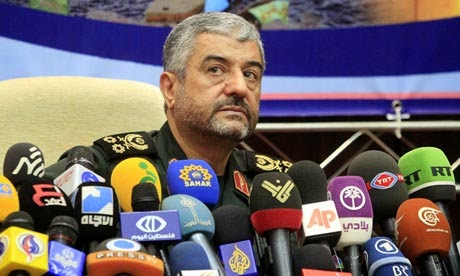 Iran and Saudi Arabia support opposing sides in Yemen. A Saudi-led coalition of Sunni countries has conducted airstrikes against the Huthi (AnsarAllah) insurgents since late March to stop their advance into southern Yemen and the post city of Aden. They captured the capital Sanaa last September. IRGC’s Quds Force is major supporter of the Huthis, who are predominantly Shia.

In Syria and Iraq conflicts, Iran’s role is reversed where it supports the governments against the predominately Sunni insurgents.

the akhoonds and their minions shamelessly and disgracefully been killing a nation known as iran for 36 years.

He has no right to speak of "killing nations" at all. His IRGC, just like ISIS (but with less Hollywood style brutality), has been massacring civilians (or supporting a dictator who is massacring civilians) in Syria for more than 4 years now. He and his IRGC practically run the show at Syria.

Those fact notwithstanding, he's still right about Saudi bombing Yemen. The civilian casualties are very high, infrastructure is being systematically destroyed, and medical help is being blocked. This is one of the world's poorest and weakest countries for crying out loud! Most Yemenis don't even have any life savings and the crises has significantly reduced their ability to earn money on a daily basis. This strategy of destroying anything that Ansarullah can use, or anything that falls under their control, is incredibly stupid (like bombing the San'aa airport yesterday to prevent Iranian planes from landing).

What happens in war-torn country without a functioning government or infrastructure? Nation-wide terrorism happens, that's what!