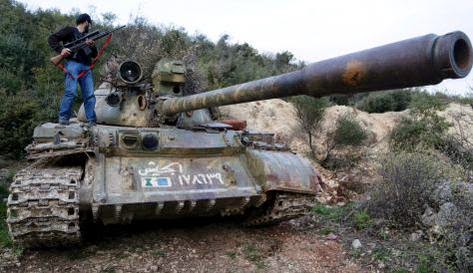 The insurgents captured tanks, armored vehicles, heavy machine guns and ammo when they overran Qarmid military base near the town of Ariha in Idlib province, northwest of Syria, on Monday. The insurgents had recently captured Idlib provincial capital Idlib City and the province’s strategic town of Jisr al-Shughour, on the highway linking it to the country’s principal port of Latakia. (AP, 27 April)

Photo credit: A rebel fighter on a tank ahead of an offensive to capture Jisr al-Shughour; 20 April 2015 (Reuters)

The Syrian people must determine their own fate.The Islamic regime must stop financing Assad's regime as well as Hezbollah in Lebanon.

The day every external financing and weapon smuggling + intelligence sharing end on the part of Qatar, Saudi Arabia and Turkey for Islamist factions currently making such dangerous headways through the province, maybe. But in the meantime, it is not close to happening i'm afraid, just like in Iraq. Assad is the lesser of two evils in this affair, hate it or like it, even by more and more western leaders' admission, including none other than John Kerry. Technically the only credible counter-force standing in the way of victory for the "Army of Conquest" in Syria is precisely Hezbollah, the NDF and other militias supported by Iran's Al-Quds and the SAA by Russia, yes. Is it great news for the future of Syria ? probably not. But such dire situations lead to think in a pragmatic fashion and make moral concessions for a time. WWII had its share of such surreal alliances.

Iran and the Quds Force as well as the Hezbollah are foreign forces in Syria. The "other militias" are also mostly foreigners, as in Afghan residents of Iran! So what's your point, that Assad is being kept in power by foreigners against the wish of some other foreigners? What a sad state of affairs!

BTW, this post is about Yemen, where the Iranians are foreigners as opposed to other foreigners representing the GCC.

@Nader
Pretty sure that's exactly what he meant... It is a very sad state of affair, but the question still remains as to what will serve iranian interests better at this point. BTW, I am far from convinced Iran's stance is the right one.. but ignoring all of the other external evils as the original post did, just strengthens the hand of stagnation.

Also, most regimes are held together by foreigners these days. Our world is now very interconnected and to expect a nation to choose their path alone seems kinda delusional.

how can this post be about Yemen when its title and body refer to Idlib in Syria ? please clarify.

Other than that, yes Nader, that was exactly my point, you nailed it. And I feel saddened by it just as you. But I also recall reading you make repeated calls for a diplomatic settlement and the fact that ultimately, Assad remains a secular option facing head-chopping fundamentalists despite he being unworthy of power, a position I personally share. Now how can that kind of diplomatic settlement have a chance of happening by following such an incomplete predicament made by Anon 8:15 towards the issue at hand only solving 50% of Syria foreign involvement troubles while closing its eyes on the other ? it's a shame you didn't view it that way and rushed instead at interrogating someone not bent bashing Iran exclusively but rather putting things into perspective of a complex conflict with many to blame.

So if I may, what is your point ? that all of Iran-backed forces currently more or less evening the tide in this battle between two different kinds of evil, one secular and former home for various religious tendencies (though also a dictatorship, I say again), and the other bent on mass killings of everyone not aligned with their madness of a religious dogma, should suddenly back away and let them fill the void ? weren't you the one who supported the stay of American troops in Afghanistan for that very reason a few months back on this very blog, so that the Taliban don't overrun weaker government forces when its allies depart ?

Why you don't you ask Anon 8:15 what he thinks other parties should be doing in parallel to a unilateral Iranian disengagement while ignoring the fact that John Kerry is now among the leaders hinting at dialogue with the Syrian regime is a mystery to me.

On second thought I'm asking myself, did you miss my point entirely Nader ? I was hinting at full disengagement of ALL foreign parties involved, and underlined the impossibility of expecting only one of them suddenly backing away unconditionally, would it be Iran-backed or GCC/Turkey-backed. Iran and the Gulf + Turkey should consult with each other in a much more serious and sustained way, seeking a real compromise for the sake of the Syrian people and setting their respective agendas aside, an element none of the parties involved seems to care much about - we've seen Erdogan equate Kurds with ISIS while its tanks were sitting on hills overlooking Kobane at the border, to quote only that episode.

Anon 7:56 PM,
My apologies, the post was indeed abut Syria. My mistake.

Anon 8:02 PM,
Thanks for your comments. Let me clarify my points as well. The current conflicts in the Middle East, from Iraq to Syria to Yemen, have been to a large extend regionalized. We have the beginning of a region at war. The traditional Arab authoritarian states are collapsing, and all kinds of state and non-state actors are taking advantage of the vacuum, it's like they been waiting for such golden opportunities to exert their influence. And no one is innocent here! Unless cooler heads prevail, region-wide, we have the making of a historic disaster in the region.

I couldn't agree more ! then our initial exchange on the matter was indeed the fruit of a misunderstanding. All foreign parties alike are to blame along with the authoritarian regimes in place in those very countries where the insolence of their tyranny created the necessary space for non-state actors to get into the mix and worsen the troubles many folds. A disaster in the making indeed. Cooler heads have to come to the fore and fast as you say, and as I have myself written time and again on this very blog and elsewhere... I hope to live and see that day rather than generations-long sectarian wars of a regional scale. Thanks for taking the time of addressing my question as well, Nader, appreciated.