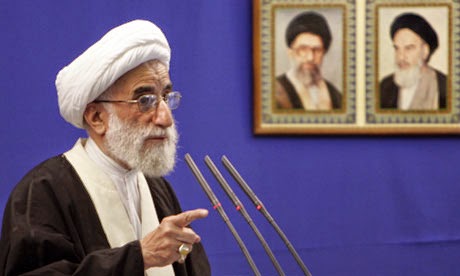 The guy is unbelievable. Even a 21 year old would not talk like that! Simple things like tact and diplomacy are alien to this mob. So if Iranians cannot afford to survive on one meal a day because of some outdated ideology they should turn to eating grass as well!

Why must Iran be so goddamn special? Why cant Iran be like the 99% of countries that get along?

He looks like he eats one meal a day.

we will eat grass, but we get the nuke
Zulfaqar Ali Butto - Pakistan PM

Not that I'm in any way supportive of Ayatollah Ali Jannati's comments but I am able to provide insights into his background and perspective.

Jannati was born in 1927. He was undoubtably shaped by experiences endured as a teen during the Allied occupation of Iran in the 1940's. For many Iranian families, it was a time spent with not enough to eat.

What's more, Jannati undoubtably would have heard stories of even worse, when after World War I Iran experienced what may have been the worst famine in its recalled history. The famine was largely the result of British policies. Millions perished. See HERE.

For Iran's political, military and social leadership, it's all about sovereignty. When Iran lost its sovereignty during periods of foreign military occupation in the 20th century, such terrible hardships were the result.

So its not unexpected that the more agitated elements of Iran's leadership would put forth such stiff and seemingly harsh rhetoric towards what they view as a direct challenge to sovereignty.

Mark, except Jannati talks about "resistance economy" and one meal a day, but goes to London for medical treatment. He probably is calling for sacrifice by others.

and Pakistan is still a failed state

Iran's governing elites traveling abroad for medical treatment is a familiar complaint levied by a segment of the electorate in response to the concept of "resistance economy." See HERE from 18MAY14.

I tried to find a date for Jannati's past trip to London for medical treatment but failed. Do you have a date for such? I'm interested.

The privileges enjoyed by the governing elite, beyond the needs of their office, should be a legitimate issue raised by the electorate, especially when the senior members of the same elite talk about "resistance economy." This is not an argument against any particular economic platform, but rather expressing outrage at the hypocrisy so prevalent in those circles.

Jannati has been reported in open source of making trips to London for medical treatment. I need to check the dates with the Guardian Council, if they respond to me. I have no problems at all with the governing elite visiting London, or any other foreign destination. But when this guy keeps talking about one meal a day, one should be very skeptical.

Jannati and the hardliners might not want to see Rouhani succeed in striking a nuclear deal with the West. President Rouhani said so today (please see my post on the subject). So he might be trying to convey to the public that they might face harder times in future.

I have red that cyclical fasting or 'starvation' can reinvigorate human stem cells, which have crucial role for the longevity of humans.

It has been proved that excessive eating has negative consequences for a human body and periodical fastings provides valuable benefits, including a cleansing of the human body systems.

Yes Jahanat joon,we will eat one meal a day on behalf of the islamo fascist non-republic so that you and your lot can continue to eat four meals a day and rob the country blind on our behalf !

One meal a day so that a son of a bitch like him can stay in power? I'd rather have no-meal-a-day and see him and his hardliner mates burn in the fires of a nuclear agreement.

To what use? The age of nuclear weapons has passed. Nobody can use nukes anymore, not since 1945. No one side would dare throw a nuke at the other side in a military conflict, even if the other side lack the capability to retaliate with nuclear weapons. The fear of world condemnation and heavy sanctions would be too great.

why the US/Israel have nukes and donot disarm ?

Iran will have nuke and Missile Reaching NY and Washington

" Iran will have nuke and Missile Reaching NY and Washington"

not while this Iranian regime is in power.

any attempt to assemble nukes by the Iranian theocracy will result in Iran's assembly sites being bombarded and destroyed.

I guess you mean "succumb" instead of "get along."

AnonymousFebruary 1, 2015 at 11:46 AM
If thats so then why have the nuclear nations not dismantled their stockpiles and disarmed?,instead we have seen these weapons continually being modernised with new countries joining the club and many more like iran having the "japan option" of quickly becoming nuclear armed if they wished and requiring only the political decision in order to do so.The value of the weapons is in their deterrent effect,do you think iraq,libya or afghanistan would have been attacked or invaded by the west if they had been nuclear armed

Anonymous February 1, 2015 at 9:23 PM
The us cant even reliably target deeply buried sites whos existence they know of like fordow with any gaurentee of success.There is very little that the us and its allies could do to stop iran if iran decided that it was to become a nuclear armed state and all that requires from iran is the political decision/will power

Yes, i believe that my country would have been invaded even if we would have had nuclear weapons. In 91 we had an even more practical option for tactical fire support, in the form of chemicals, which could be delivered through artillery barrage or aerial bombardement, but were never used against the Coalition. We didn't use them for fear of nuclear retaliation. Besides we could not strike the US mainland anyways. Would we have dropped a nuclear bomb on our own soil or nearby, in Kuwait or across the border in Saudi Arabia. Never. The radioactive fallout would have had an equally devastating effect on us.

the US will take no more than three weeks to control the air space over iran and bomb whatever the US wishes to bomb until destruction is assured.

Brig. Gen. Basrawi (IQAF.ret)February 2, 2015 at 10:31 PM
The whole point of a nuclear arsenal is its deterrence value,do you really think that the us would have attempted to build up an invasion force in saudi or kuwait knowing that it could be nuked at any time,it also would have allowed you to make full use of your chemical arsenal without fear of retaliation from any western nuclear weapons,as for the risk of fallout that would depend on the targeting whether it was air or ground burst,if you chose ground burst then as with chemical weapons you would have to take into account the prevailing winds most likely any fallout would`ve been blown back further in sa and the gulf states

AnonymousFebruary 2, 2015 at 10:32 PM
You seem to be pretty ignorant yourself.Why if the us could so easily destroy irans nuclear infrastructure did the us resort to sanctions and then finally back track on its red lines like "no enrichment" to finally come to the negotiating table?.You talk of "volleys of missiles" well iran also has that capability too with the largest ballistic missile force in the region not to mention the fact that the us has 40,000 personnel in kuwait alone which would be targeted in retaliation plus their carrier group in bahrain and the rest of their facilities in the gulf,not to mention that all of the gulf states air bases are within easy reach of irans missiles which would limit us air power to carriers parked in the arabian sea several hundred kilometers from iran.Why do you think the israelis never tried to target irans nuclear program,its pretty simple really:its to big,its to dispersed,its to well hidden,not to mention that sites like natanz and fordow in addition to being buried literally bristle with defences and lastly any attack no matter how well it succeeds or fails would give iran all the excuse it would ever need to leave the npt and after that there is no more monitoring of any kind of irans nuclear program.Any attack on iran would be very expensive and its outcome at best very uncertain

Anon 4:22 PM
No,"get along". Why is it that West residing groupies always consider getting along as "succumb"? China is getting along with the whole world and making hunreds of billions of dollars from it. Have they "succumb"? While Iran with huge potential has to be the champion pariah of the planet while receiving only 900 million dollars in six months from withheld oil revenues.Hollow victory indeed.

AnonymousFebruary 4, 2015 at 4:24 PM
Last time I looked the west wasnt sanctioning china to force it to comply with western dictates and demands unlike iran,you and those other westoxicated individuals like you seem to think that if iran just followed western dictates and did as it was told ie became just another "arab dictatorship" vassal state of the west,or "get along" as you put it,then everything would be great,you conveniently ignore the fact that it was the west who chose to sanction iran .No one ever said that the costs of independence and national sovereignty would be cheap,the alternatives are not as you seem to think between iran being another china or a "champion pariah of the planet",the choice is between iran being an independent state versus being an egypt or saudi arabia ie countries that put the interests of the west ahead of their own.What you`re proposing isnt "getting along" its at best appeasement,which has a very poor track record historically,and at worst capitulation,only when the west can accept an independent sovereign iri with its own legitimate concerns and interests will there be any real chance of "getting along"

The sanctions are imposed because of nuclear program, and specifically forcing Iran not to go nuclear. Could these sanctions succeed in stopping Iran not to build the bomb? Probably not, and in that sense they might prove to be failure. But the argument that Iran is one of only 2-3 countries in the world wanting to be independent, hence subject to sanctions, is disingenuous.