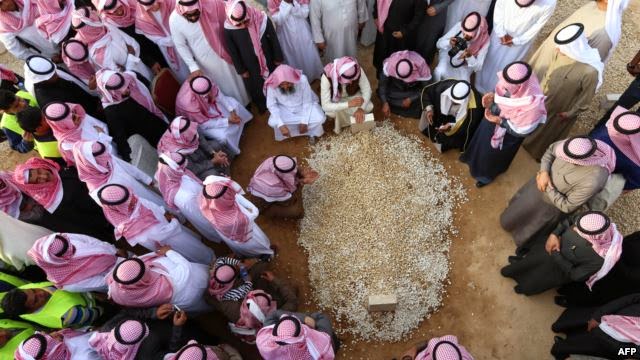 Photo credit: Mourners gather around the grave of Saudi Arabia’s King Abdullah at the Al-Qud cemetery in Riyadh; 23 January 2015. Upholding Saudi religious beliefs and traditions, the dead, kings and commoners alike, are buried in simple graves with a small headstone. And unlike the Shias, no shrines. (Photo: AFP)

Zarif is being hounded by the hard-liners......

" Iran's Foreign Minister Javad Zarif has been summoned before parliament to explain his recent public stroll with US Secretary of State John Kerry, according to a report by the country's official IRNA news agency.
On January 14, on the sidelines of ongoing nuclear negotiations, Zarif took a 15-minute walk through the streets of Geneva with Kerry.
Now, according to IRNA, 21 Iranian parliamentarians are demanding that Zarif explain his "diplomatic mistake." According to local media, the MPs signed a petition to call in the moderate minister for an explanation.
"Given the Great Satan's endless demands and sabotage during the course of the nuclear negotiations, there is no conceivable ground for intimacy between the foreign ministers of Iran and America," said the petition published in Fars News."

sadly there are still jackasses still braying about " the Great Satan"