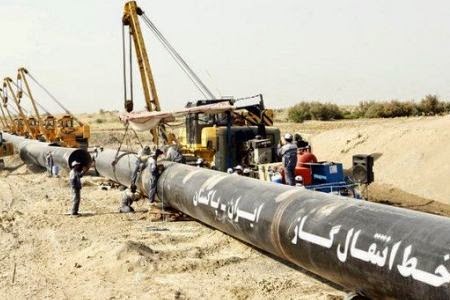 Tehran has warned Islamabad over falling behind the schedule in fullfiling its obligations in a multi-billion-dollar pipeline project that is to take natural gas from Iran to Pakistan.

“Under a contract signed between Iran and Pakistan, the latter had to deliver its commitments by starting import of Iran’s gas supplies in December 2014, but it seems unlikely for Pakistan to take any measure before the end of 2015,” Reza Araqi, the managing director of the National Iranian Gas Company, told reporters in Tehran on Saturday.

Araqi also denied reports that Iran has decided not to fine Islamabad for its long delay in completing the project. Under the Gas Sales Purchase Agreement signed with Iran in 2009, the first flow of gas to Pakistan should have started no later than 31 December 2014.

The Iran-Pakistan (IP) pipeline begins from Assalouyeh on the Persian Gulf, and stretches over 1,100km (684 miles) through southern shores and Iranian Baluchistan before reaching the Pakistani border, with construction on the Iranian side completed two years ago. Pakistan was to build the remaining section through Pakistani Baluchistan and Sindh, but has not even begun the work.

IP pipeline has been a controversial project from the very beginning. It was originally designed as Iran-Pakistan-India (IPI) to take gas to India. The Indian government, citing concerns over Iran sanctions, bowed out of the project, which then became the IP pipeline. Now it seems that only an I-pipeline has remained!

Sadly the pakistanis once again put the interests of saudi and the us over their own,still at least iran can use its section of the pipeline to supply gas to its eastern provinces so its not a total loss for iran,the big losers in this are the pakistanis,no surprises there,who desperately need cheap energy,well perhaps the saudis and us can supply it to them instead.

This will cost much more,but pipeline should go under sea and straight to India.Avoid that terrorist infested country at all costs! Let them use cow dung for fuel.

Pakistan is a fallen state...even the signed contract by there president has no meanings...