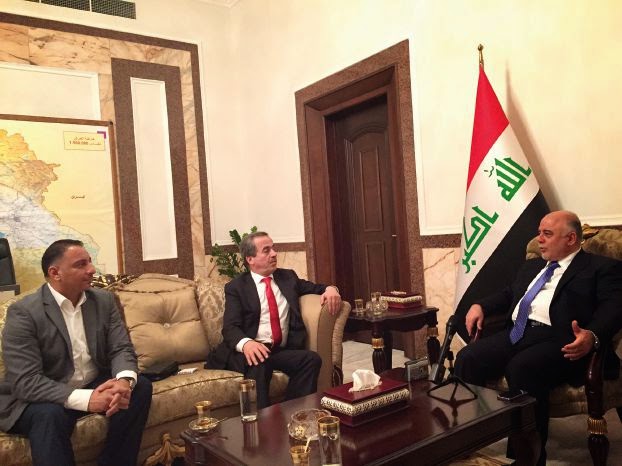 Al-Hayat conducted an interview with Iraqi Prime Minister Haidar Al-Abadi, who discusses Iraqi security situation and relations with Iran, U.S., Saudi Arabia and oil. Below, are excerpts from the interview, especially on Iraqi-Iranian relations.

To read the complete English translation of the interview, which appeared in Al-Monitor on Wednesday, please click here. For our Arabic readers, here is the link to the original Al-Hayat article.

Al-Hayat:  Was it the US or Iran that took the initiative to help Iraq first?
Abadi:  Iran was the first. Since the first week, it established an air bridge for the transfer of weapons to Iraq, Kurdistan and Baghdad, and this was not a secret. Iran and Iraq have common interests in the war against IS. I have no doubt that Iranians are honestly defending Iraq as the IS threat goes beyond Iraq, which is a real danger to Iran. If this organization managed to reach the Iranian border, either through Kurdistan or across Diyala, huge areas of Iran would have been shaken. This quick Iranian intervention to help Iraq was a strategic issue, and it happened so quick that there was no understanding on the payment modality for the Iranian weapons given the seriousness of the situation.

Al-Hayat:  Is there actually a problem called "Iran's management of the Iraqi matter"?
Abadi:  I will be candid on this point. Our relationship with Iran is strong for several reasons. The first is geographical, as we share the longest border, and another is demographic, as the Iraqi population density is concentrated in the east adjacent to the Iranian border. This has created over the years a cultural intertwining. Moreover, Iraqi security is correlated with Iranian national security. Iran fought with Iraq a war that lasted for years and that was devastating to both sides. The Iranians still fear the Iraqi situation will head once again in the same direction that led to this war. … It is well known that Saddam Hussein would not have been able to continue the war if it weren’t for Arab and Western support. Iran still feels apprehension and fear of a repetition of this previous situation. Thus, the Iranians will probably take further steps, such as disagreeing with Iraq on the position of the international coalition against IS.

Al-Hayat:  Do you disagree with Iran on this point?
Abadi:  Certainly, we have strong relations with the US and Western countries and we have a high level planning in terms of airstrikes and training. This is seen by Iranians as a threat. This is why we told our brothers in Iran that this is not their right, but it is rather our natural right and an Iraqi internal affair. We cannot allow the use of Iraqi territory against Iran, as the international coalition stands beside Iraq against IS and not against any neighboring country. This is known and the coalition is not against Syria despite the disagreements between the international coalition and the regime there.
However, I believe that despite our strong relations with Iran, we will not allow it to interfere in our internal affairs. Iranians have their interests and we have our own. There is a difference between having common interests and between having the Iranians interfere in internal Iraqi affairs. We aim at having common interests with our neighboring countries and all regional countries.

Al-Hayat:  Is Syria an obstacle to Iraqi-Saudi relations?
Abadi:  We did not feel that way during the meetings between the two countries. The Syrian crisis might be an obstacle for Iraq’s relations with Turkey, but not with Saudi Arabia.
What we witnessed today was a setback in the positions of all parties regarding the Syrian issue. Syria was supposed to be part of the Arab Spring, but we reached the Arab Destruction, and this is a complete disaster. There is more than one angle to look at the situation in Syria, and there is talk of a repressive, totalitarian and non-democratic regime in this country, and others are talking about a national opposition wanting to liberate Syria from the regime's repression. A third side believes that the Syrian regime is a secular system, and that it is fighting an extremist opposition. The current general trend is that IS is the most dangerous group in Syria, not the regime.

Al-Hayat:  Are you waiting for a US-Iranian understanding? Personally, do you think the US and Iran are on their way to reaching an agreement?
Abadi:  This issue is probably out of Iraq’s control. However, we care about the two countries working on supporting Iraq in its war against IS, and both these countries do not want to clash with Iraq.

Al-Hayat:  Do you think that the West has forgotten the issue of overthrowing Assad?
Abadi:  It was certainly postponed. The project to train the opposition has not even started yet, and it seems that it was developed to persuade the others to keep the status quo. The case is similar to what happened in Iraq. Following the war of Kuwait, the Americans claimed that they support the Iraqi opposition. This lasted for 12 years, and nothing happened on the ground, until the regime was ousted.

Al-Hayat:  What is the impact of the falling oil prices in Iraq?
Abadi:  The decline of oil prices has adversely affected all oil-producing countries, especially Iraq. Iraq, unlike the Gulf countries, does not have oil reserves or infrastructure, as it has been preoccupied with wars and economic blockade for decades. Now after the Baath Party has left power, Iraq is now fighting against terrorists and thus we need the oil money to rebuild what has been destroyed. We depend on oil in our budget by 85% to 90%, as we have yet to build an economy in parallel to the oil fields as other countries have managed to do. Thus, we have been doubly affected by the decline of oil. This is a “catastrophe” that may affect the lives of people. Nevertheless, Iraq is not a bankrupt state, but is going through a financial crisis this year and partly in the next year. Eventually Iraq has potential.

Photo credit: Iraqi Prime Minister Haidar al-Abadi during the interview with Al-Hayat (Al-Hayat)
Posted by Nader Uskowi at 7:08 AM

Thank you for this article.