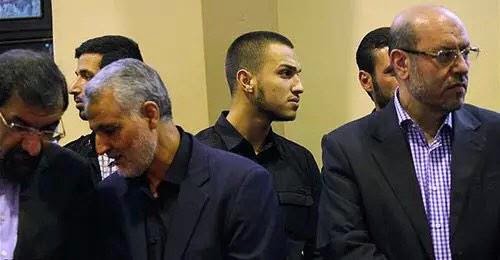 Jihad Mughniyeh was the son of Imad Mughniyeh, the military commander of the Hezbollah who was assassinated in 2008 in a car bomb to Israeli foreign intelligence. He was a rising star within Hezbollah, whose last public visit to Iran was in September 2013 to attend the funeral of the mother of the Quds Force Commander Gen. Qasem Soleimani (pictured above.)

Issa was a senior Hezbollah military commander and head of its operations in Syria. The deaths of Jihad Mughniyeh and a senior Hezbollah commander are a serious setback for their organizations. The presence of high-ranking members of the Hezbollah near Golan might signify that they could have been in planning stages of a major operations against Israel at the border.

Imad Mugniyah's wife, Saada Badr Al Din, is not Iranian but Lebanese. They were cousins.

this was a very high level delegation preparing anti Israel missile attacks from Syria. It is very unlikely for hizbullah to send a delegation of this calibre to fight daesh or al nusra front....

good news for Lebanon and Syria . a few less Iranian lackeys working to subvert Lebanon's sovereignty and betraying the Syrian people by helping to kill Syrians in the name of preserving the vile Assad dictatorship

Such a well orchestrated attack by Israel, as normal it shows superior intelligence will produce the best outcome for any military action. And such a great mistake by the other side to let so many high ranking people being taken out so easily. Once again, intelligence leakage is the easiest way of ruining your organization and structure, which seems to be the case with the Lebanese Shia fighting organization. Since 2007 it seems Hezbollah and Syria have not been able to stop these leaks and continuously lost the intelligence war to the other side.

Yes, a senior member of Hezbollah's security apparatus was outed as an agent and arrested only recently. It could have been infiltrated more than we knew.

"The enemy of my enemy is my friend."