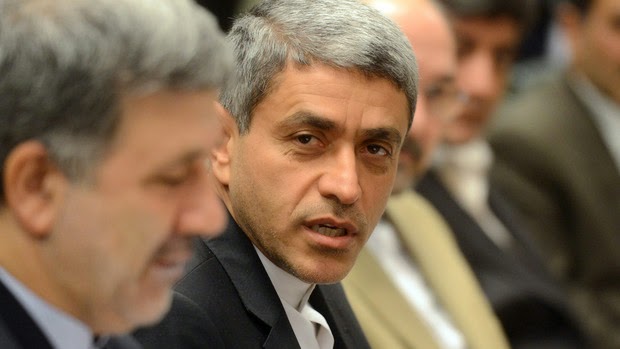 Iran’s Minister of Finance and Economy Ali Tayeb-Nia announced today that Iran is revising its draft budget to assume an oil base price of $40 a barrel. The Iranian calendar and fiscal year begins on 21 March. Tayebnia added that in order to cope with falling revenues, the government will have to halt some projects. (Fars News Agency/Bloomberg, 15 January)

President Rouhani had presented a budget based on $72 oil to the parliament only on 7 December. That’s the budget that is now being revised to account for a $40 oil.

The price of Brent crude has fallen by 54 percent in the past year, forcing governments across the Persian Gulf to reduce spending, including cuts for subsidies on petroleum products and capital budgets. On Wednesday, Qatar Petroleum and Royal Dutch Shell called off plans to build a $6.5 billion petrochemical plant.

“Most Gulf countries are pricing $50 oil for 2015,” said Naeem Aslam, chief market analysts at Dublin-based Avatrade. “ (And) creditors want to be sure they recoup their money so there could be hesitation to starting up new projects.” (Bloomberg, 15 January)

Meanwhile, Brent futures price fell by 2% on Thursday and finished at $47.67.

how will the lower revenue estimates affect that budget?

what will get cut?

Makes the budget realistic. Government needs to exchange petrodollars into rial for its operations and government agencies do import goods and services from abroad and need to pay for them from the treasury's dwindling hard currency account. The government also is funding two wars in Iraq and Syria that for the most part are paid by petrodollars, along with other foreign commitments of the government, including other security and intelligence and diplomatic operations. Sanctions and now drastically lower oil revenues put the government in a bind, and need to be managed carefully. Easier said than done, however.

The Iranian minister went on to state that expectations are that inflation will be further reduced from "40% to 16%" and that crude oil production would be increased by 50%.

I understand that. But I always thought it would be safer to report the drop in inflation or rise in oil production or news of events that would happen in future when they actually happen. Otherwise, all governments, and the Islamic Republic is no exception, would love to state wish lists for people to feel good even if for a moment. Iran can indeed lower inflation rate by boosting rial and increase oil production in short order if a nuclear deal is reached soon.

doesn't much of the funding for Iran's foreign adventures and funding for terrorist groups come from monies directly under the control of Khamenei and not appearing on the budget submitted to the majlis?