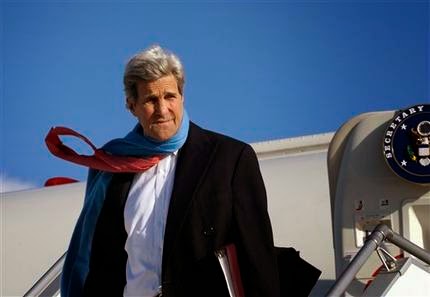 Secretary of State John Kerry, traveling to India to attend an international conference, stopped in Munch, Germany today to visit with the ailing Sulatn Qabus of Oman who has been receiving medical treatment in Germany since November. The 74-year old ruler of Oman played a key role in hosting secret bilateral talks between the U.S. and Iran in 2013, and has been a facilitator in Iran nuclear talks between.

Kerry will “meet with Sultan Qabus of Oman to express his gratitude for their long-standing and strong relationships,” said Jen Psaki, the State Department spokeswoman.

On Wednesday 14 January, Kerry will meet with Iranian Foreign Minister Javad Zarif in Geneva ahead of a new round of nuclear talks, as the parties try to break a deadlock to reach a final accord amid signs that internal disagreements in Iran may have stalled progress on a deal.

Last Sunday, President Rouhani in a bold speech in Tehran, said Iran needs to engage with the world to grow its economy and that the ideals of the Islamic Republic were not tied to the number of its centrifuges. Three days later, Supreme Leader Ayatollah Khamenei, also in a speech at a public gathering, warned Iranian government officials not to trust the United States, saying the Americans will renege on their commitments. “This enemy cannot be trusted,” Khamanei said.

Since the regime is largely legitimated by its opposition to the U.S., any normalizing of relations with US will create an identity crisis for mullahs. This is why this guy Khamenei, despite Iran's dire needs to end the sanctions and bring the nuclear issue to an end, does not want to normalize relations with the U.S.

Yes, but Rouhani is also an Islamic Republic official and a cleric, yet he wants to normalize relations with the West to bring the country out of isolation and help grow the economy. The internal disagreements are real, two different directions vis-a-vis relations with the U.S. and the West, hardline/revolutionary approach by Khamenei and moderate leaning by Rouhani.

sounds like the repeat of encounters in Khatami's era. In this case we know who is going to win eventually!

Interesting how much the hard right in both countries share with each other!