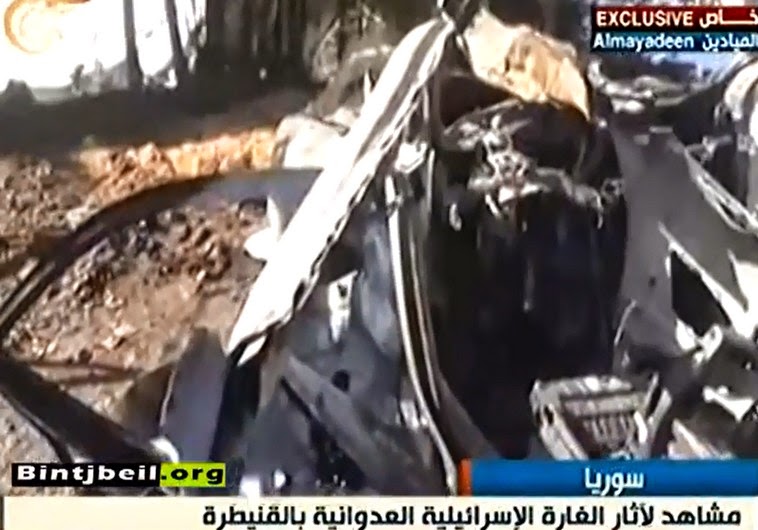 An Iranian general killed in an Israeli airstrike last Sunday in Syria may have died because he did not turn off his cellphone. The Lebanese newspaper Al-Joumhouria reported today that a Hezbollah investigation into the strike found that IRGC Gen. Mohammad Allahdadi kept his cellphone on in a sensitive area targeted by Israeli intelligence. 11 people, including Allahdadi and senior Hezbollah commanders, Jihad Mughniyeh and Mohammas Issa, and their entourage were killed in the strike.

At the time of the attack, Gen. Allahdad and Hezbollah commanders were in the Quneitra area on the Syrian-controlled side of the Golan Heights at outposts housing a joint Iranian-Hezbollah “operations room” built recently as a command post to counter the Syrian rebel forces in the area, the paper said.

Photo credit: Lebanese TV screenshot of the convoy hit by the Israeli airstrike.

That is correct, the IRGC like most of Iranian military has been cut off from the rest of the world since 1979 and is technologically not very sophisticated and unfamiliar with modern ELINT and GPS tracking of all communication, especially by the US supplied Zionist forces. Perhaps, now the IRGC and Artesh will swallow their fake pride and learn from Russians about counter ELINT as Russian forces in Crimea and Ukraine showed that they are masters of ELINT and secure encrypted communications. Cellphones are open commercial communication devices and even criminals can track them, let alone the modern Zionist ELINT station at Mt. Hermon in Occupied Golan, barely 7 kms from the site of the strike. Iran must equip its senior officers with secure individual communications devises and teach them about counter ELINT operations. Only interaction with other modern militaries like Russia and China can accomplish that. The IRGC must adapt to the modern electronic battlefield.

It isnt Israelis that are exeptionally good...its Iranian IRGC that is really amateurish

That is perhaps the most accurate assessment, it boggles the mind that what kind of a general would be walking around after dismounting from a thin skinned vehicle in a major hot zone barley a few kilometers from a Zionist ELINT monitoring station and in open visual sight? It also shows the typical Iranian and third world careless and fatalistic attitude and nothing to do with Zionists being good militarily. Only better training, motivation, education and intelligence wins wars, just ask the Vietnamese who defeated the most sophisticated military in the world with a strategic mass hundred fold their size. Muslims and Arabs in particular lose wars due to unprofessional militaries and a lack of motivation and even when better armed like the Iraqis in 1980 and Egyptians in 1973, they quickly lose momentum due to lack of discipline, poor leadership, untrained soldiers and absence of strategic planning. The IRGC is basically an incestuous armed political organization that is very low on professionalism or a dedicated officers corps and rank and file. The quality of leadership even in the Artesh today is very poor and officer training is abysmal and inadequate for modern warfare.