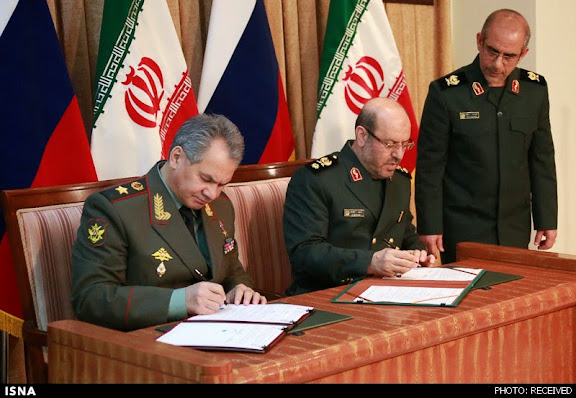 There is considerable open source buzz concerning this week's meeting between the Iranian and Russian defense ministers in Tehran. Aviation writer Babak Taghvaee asserts the following:

- Two S-300PMU-2 batteries will be delivered to Iran
- Russian will overhaul and upgrade IRIAF's Mikoyan-Gurevich MiG-29s and Su-24s to SMT and M2 level respectively, in Tehran

COMMENTARY:
- It would surprise this writer to see the Russians deliver the S-300 to Iran at this late point in time. If accurate, either this is further posturing by the Russians vis-a-vis the United States in its dealings with the Ukraine crisis, or perhaps a red line has been crossed, with the Russians reacting with delivery.

- Iranian Ilyushin Il-76 transport aircraft have been logistical workhorses, for the Iran-led coalition against ISIL and Al-Qaida linked forces in the region. As such, in the list of Russo-Iranian discussion points, this would seem to offer the more likely possibility of acceptance.

- The IRIAF is indeed in need of Mikoyan-Gurevich MiG-29 and Sukhoi Su-24 upgrades as well as a/c systems replacements. Recent U.S.-led sanctions against Russia over the Ukraine crisis provide an economic incentive for Russia as a vendor, in suppling Iran with such defense hardware/service.

- It is the opinion of this writer that in terms of possibilities ,the procurement by Iran of the Sukhoi Su-30MK fighter aircraft represents a longshot. Again, Russian posturing may come in to play, while on the Iranian side economic conditions would seem to preclude such a purchase. However there is a definite need for Iran to purchase new combat aircraft.

- It makes sense for Iran to acquire BTR-80 APCs for border protection duties, as Babak Taghvaee asserts. Again, U.S.-led sanctions against Russia over the Ukraine crisis provide an economic incentive for Russia as a vendor, in supplying Iran with such defense hardware.

- At this point in time Su-25 related deliveries to Iran might be considered replacement combat aircraft, in the war against ISIL.

- Engines and ejection seats for the Iranian Kowsar 88 and any procurement of training jets (doubling as light attack aircraft)  would also appear subject to current, less favorable economic conditions. However, as in the case of discussion over a potential purchase of Sukhoi Su-30MK fighter aircraft, such a groundwork could eventually lead to an acceptable deal at a future date, where conditions are more favorable.
Posted by Mark Pyruz at 3:08 AM

This time Russia seems genuine and serious as Iranian-Russo defence and strategic outlook coincides on all major issues from Syria to Iraq. Russia should deliver these weapons at an accelerated rate as Iran is deeply committed to fighting Wahabbi sponsored terror groups in the region.

Iran and Russia are as serious and genuine about this as Molotov and Von Ribbentrop were.

Given the recent landmark nuclear agreement and the beginning of a new economic chapter for iran, it woild make sense that the iranians spend some serious cash on updating their defence capabilities. This would mesn purchasing newer generation fighters like the su-30. A move that will upset the saudis and israelis for sure!