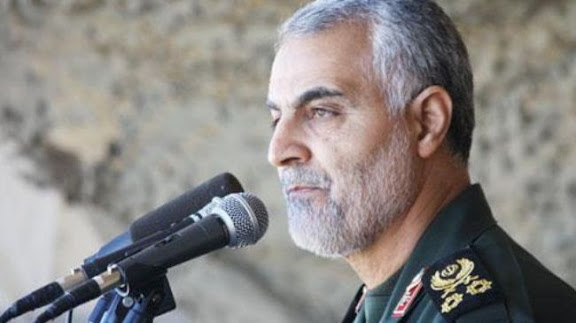 “Iran is hoping you look the other way,” Secretary of State John Kerry bluntly told members of the Senate Foreign Relations Committee today. “Our inaction would surely give them a permission slip for them to at least misinterpret our intention if not to put it to the test.” [Source: ABC News]

"The aim of the United States is not to protect human rights ... but to destroy the front of resistance [against Zionism]," Quds Force commander Qassem Soleimani was quoted as saying. "We will support Syria to the end," he added in a speech to the Assembly of Experts, the body that supervises the work of Supreme Leader Ayatollah Ali Khamenei. [Source: Reuters]

SECSTATE Kerry believes the Iranians will "get the message" with a U.S.-led strike on Syria.  There are those inside Iran that regard IRGC-QF Commander Maj. Gen. Soleimani as the hero of what we Americans term "The Iraq War." Where more moderate elements of Iran's dynamic and complex political environment are hoping for improved relations with the West, ushered in with the Rouhani administration, others including the IRGC-QF Commander are of the position that the United States has no genuine desire for improving relations and that attempts at engagement represent a counter-productive, waste of time. Seen in this light, Kerry's "message" to the Iranians is in reality bolstering the case put forward by IRGC-QF and political elements of a similar persuasion, while undercutting Iran's political moderates.

For his part, Iran's foreign minister has recently stated the potential outreach of the Rouhani administration toward the West could very well be derailed even before being pursued in earnest, by those he terms as "extremists" and "war interest groups" within the American political landscape.
Posted by Mark Pyruz at 1:57 AM

More terrorist propaganda from Mark (who lives in the USA).

The "general" reminds me of this Zabzi seller in Shemiran.I wonder if that is him?

Yes because the US is innocent. Listen kid let me teach you some history, the Americans you worship used chemical weapons (agent orange) in South Vietnam, killing 400.000 Vietnamese. To this day Vietnamese infants are born deformed.

WELL said Mark!
every sane human being must learn to engage! and this is what the Iranian people have done over the years -today they will vote for a reformist ,the other day they would vote for a Conservative depending on the global political situation and the realities in the country.
HERE is a US president who promised to stretch his hands to America foes.Yesterday Iran had an unfriendly 'administration' which may explain why the Us President did not succeed to bridge the two Nations-

@What then holds Obama's hand in reaching for Iran?given the willingness in Tehran now?

@-IS this not another manifestation that some crooked officials sharks and mandarins among the Us policy makers are indeed benefiting ,raking in billions of dollars evidently benefiting from the ill blood between the two Nations at the expense of the citizens of the two powers?

“If several years ago we were worried about enemy ground invasion and other [types of] attacks against our country, today we are certain that no one dares to launch a military attack against Iran,” Major General Baqeri said on Sunday.

The general added that Iran’s defenses have been fortified and its deterrence power has increased.

“Compared with the past, today, we are in an excellent defense and security condition...,” said Baqeri.

the Deputy is full of shit, mat

Anon 3:04 AM, so are those pushing for war with Syria and Iran. The fact is, other states have not attacked Iran recently, despite their talk.

that no major military attacks on Iran have occurred is not necessarily due to any fear of Iran's armed forces.

Anon 7:28 PM, yeah right. zionists and their shills keep can keep telling their public that.