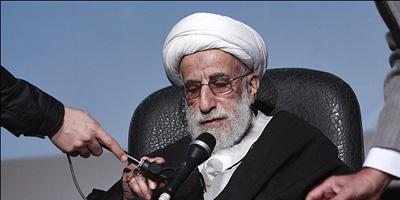 The council is a 12-member body, headed by hardliner Ayatollah Ahmad Janati, and is also tasked with ensuring laws approved by parliament are in line with the constitution and sharia, or Islamic law.
It is made up of six clerics appointed by Khamenei and six jurists who are proposed by the judicial chief (who himself is appointed by Khamenei) and voted in by Majlis, whose members have already been vetted by the council.
Among the clerics appointed to a six-year term by Khamenei are ex-judiciary chiefs Ayatollah Mahmoud Hashemi Shahroudi and Ayatollah Mohammad Yazdi, who were already council members, and a newcomer, the 60-year old cleric Hojatol-Eslam Shabparast.

For the June 14 presidential election, the council approved eight candidates out of nearly 700 candidates.

The rotation of Zombies.

but, but, but Shabparast is a young lad just starting his seventh decade!

on the other hand, Yazdi might have been temporarily married to the lad's mother.

Men like him ruin any positive gains that may have come out of the recent election. The very existence of this unelected body negates the notion of the IRI being a semi-democratic entity and NOT a totalitarian theocracy as portrayed in the west.

People mature with a time and circumstances.

Older people use to have more practical wisdom than the young ones, and their advices can prevent more mistakes on the younger part of a society.

Imagine how family would last when their children would have the same weight of their wishes and can override parents decisions.

Therefore political system of the Islamic Republic is unique one and deserves to be an example for the majority countries of the world.

There are examples in history of the world, where religious foundations of a nation's majority, preserved its identity during occupations or calamities.

OH! who says women are unclean in ISLAM-you know lying is a tough job and it needs real tough Guys !!.

IRI was never meant to be a democratic or even a semi-democratic state.The object of Khomeini and his clan was to get power back for the mullahs and create a theocratic state.And if it meant that some of the Iranian people had to be tricked into following them,then so be it.

@B.M.A....And this coming from someone that doesn't know when to stop lying as a hobby.
Look at Iran's islamic foreign minister when he visits EU,he doesn't shake hands with Katherine Stone.Plus go and read Khomeini's little book and then come here with your diatribes.

Dream on! The political system of the islamic republic has taught countries like Egypt that islamist government can't be trusted.It's nothing but KHORAFOT.

black man adam what are you talking about?

Not you again A-F the archetype Fool! What are you babbling about.

Lot of the mullahs in those days were under the pay of the Shah's government. Prime minister Jamshid Amoozegare stopped the payments to the mullahs which lead to their uprising against the government of the time.
The reasons why Khalkhali murdered Hovaida is because he knew to much about the history of the new ruling clique.