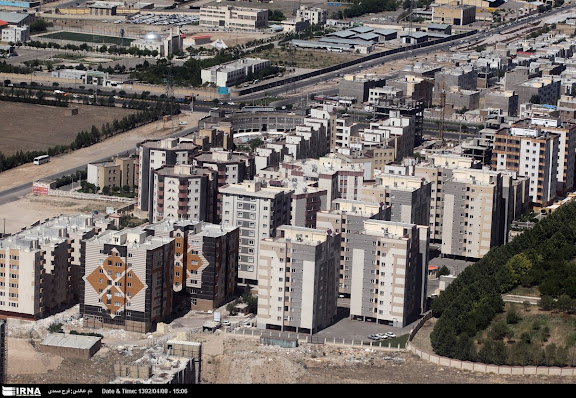 Above: some of the 12.000 public housing units recently constructed at this one residential project in Zanjan


The administration of President Mahmoud Ahmadinejad has handed the keys to over 1.18 million low-cost [units] to applicants under the Mehr Housing Project, the transport and urban development minister announced on Friday.

Of the 2.18 million Mehr [units] under construction, over 1.18 million have been completed and given to applicants, Ali Nikzad said.

He said the other one million residential units will be completed by the end of the current Iranian calendar year (March 20, 2014).

He also said during the past eight years, 2.12 million rural houses have been renovated to withstand earthquakes.

The administration has been implementing the Mehr Housing Project in different parts of the country to build millions of residential units and stabilize housing prices.

Under this plan, real estate developers are offered free parcels of land in return for building cheap residential units for first-time buyers, who receive 99-year mortgages for the purchase of the land.

It is an Ahmadinejad policy such as this which provides implied justification for the results of methodologically sound public opinion polls where consistently large majorities inside Iran provide varying levels of positive response when queried over their form of governance. Even Khamenei, who in the Western press has been depicted as being severely anti-Ahmadinejad, stated at a recent speech:


The incumbent administration enjoys many strengths although it may suffer from certain weaknesses. Which one of us does not suffer from weaknesses in our work? It is necessary to see the strengths as well. Important things have been done in the country. The services that have been rendered, the infrastructure-related work has been done, the development projects that have been carried out - these things must not be ignored.

Relevant to this observation is the latest blog post from Professor Proofessor Djavad Salehi-Isfahani, titled "Evaluate policies, then politicians." Well worth the read.

99 year mortgages? joojeh scraps are now down to one or two meals every seven but by golly they're homeowners!

To be totally honest and non-political, the Islamic Republic has delivered a lot in terms of alleviating the common men and women of Iran in terms of health care and social safety net. That is the primary reason besides nationalism that you will never see a color coded "Persian bahar" (spring). However, now with political maturity, democracy and stability it is time to ease up on the outdated socio-moral enforcement like chador and social mixed gatherings. Men and women openly going out together or "dating" in safety is only going to make Iran stronger and more moral, as these things go on anyway and it is not the governments business. Look at the Arabs at Tahrir square raping and molesting women including foreigners, or the Takfiri scum raping little boys in Syria due to sheer frustrations and hypocrisy. Iranians are mature and civilized people and the mullahs need to let them breathe socially and culturally.

Mark do you work at all in the u.s.? Or you on public assistance?

What "public assistance"? in the deadbeat US stasi gulag. There are 100 million on foodstamps making a bee line for the nearest food kitchen and much worse yet to come. Iran is a paradise in comparison.

oh! brother! since when did raping little boys and women become a symbol of 'freedom 'THIS MADNESS will never happen in IRAN.[God forbid]
@ AND please justify how 'dating ' in safety becomes a catalyst for a stronger Nation!.

Sources from the IRI said that over 70% of population below poverty line.
70% of 75 million people is 52 million 500 thousand.There is also 30% unemployment totaling nearly 24 million in the working population of 55 million.
Yes I'm sure "Iran is a paradise" for hired idiots,thugs and killers for the regime.

Azizam, male and female attraction to each other is part of the natural selection process and can not be controlled by enforcing bizarre morality by any state. Persian culture is highly evolved and just look at the romantic poetry of Khayyam, Hafez, Saadi et.al. Most Iranians are balanced conservative people and forcing women to wear chador or gender seclusion is NOT part of our culture. Persian women have been an integral and equal part of society and have had total inclusion from being warriors to teachers. Excluding women from high office is also not very sound policy in the 21st century, when these exclusions were not applied even in the post-Islamic conquest of Persia period or in imperial times, not to mention during the Zoroastrian period of our rich history. Believe me, this chador or burka business is purely Arab and thrust down uneducated and weak societies like India, Afghanistan and Pakistan by Wahabbi money and by corrupt and ignorant Salafi mullahs. Iranians have a much richer culture and need to follow their national and cultural traditions.

The outdated concept o chador or burka is an archaic and ignorant Arab Bedouin creed and even nothing to do with Islam. Over 80% of Muslim women from Indonesia to Turkey are not forced to wear a walking tent, which is unhygienic to say the least in hot and humid nations or desert climates. Also segregating boys from their natural attraction to girls only causes sexual tensions and frustrations and unnatural drift towards homosexuality, not the western "fashionable gay" types either. Just pay attention to the pathetic Arabs and their perverted sexual practices that even in the middle of "Arab Spring" they are preying on female demonstrators. Healthy evolved cultures take an attitude of live and let live and mullahs forcing a 7th century version of social norms is not acceptable to a vast majority of Muslims, particularly Iranians. All these socio-economic and cultural frustrations are on ample and sad display the Arab Spring madness.

One of the primary reasons that Khamenei sponsored the election the of a socially tolerant Rohani was the feeling that Iranians were getting sick of the conservative Ahmadinejad type strict social mores by "morality police". Loosening up the controls on people only makes the regime more credible. It is not the governments business to see if boys and girls are holding hands in Mellat park or women on how bright a colour of wearing lipstick on Valiasr.

Not too sure about your khat based rant on Iran, but here is the official US poverty rates and child poverty increased by 23% since the Zionists started the delusional lost wars in 2002. Real US unemployment is over 25% and suicides in the loser military are up by 250% since the Taliban started major ass whupping.

One-in-three on some form of food assistance – are you proud, America?

That’s according to the U.S. Department of Agriculture, which administers the so-called “food stamp” program – a combination of 15 food programs offered by the agency, which cost taxpayers a staggering $114 billion in 2012.

As noted by CNSNews.com, the number of folks getting food assistance is higher than the number of full-time private-sector employees in the country (the Bureau of Labor Statistics estimates that number to be around 97.1 million).

Of that 101 million figure, 47 million were participating in SNAP – Supplemental Nutrition Assistance Program – the old “food stamps” program (nowadays recipients are issued a debit card with a pre-set amount rather than a food stamp booklet, so recipients don’t have to deal with the “stigma” of receiving assistance).

“The biggest factor behind the upward march of food stamps is a sluggish job market and a rising poverty rate. At the same time, many states have pushed to get more people to apply for SNAP, a program where the federal government picks up the tab,” the paper noted. “But there is another driver, which has its origins in President Bill Clinton’s 1996 welfare overhaul. In recent years, the law has enabled states to ease asset and income tests for would-be participants, with the encouragement of the Obama administration, allowing into the program people with relatively higher incomes as well as savings.”

Welcome to Obama’s America, where poverty programs designed to provide assistance to the downtrodden while encouraging them to become self-sufficient have been transformed into voter-creation and savings programs – all at the expense of the taxpayer.

Obama once pledged to “fundamentally transform” our country. With congressional assistance and the massive Administrative State, he’s doing just that. What those who fell for the “hope and change” message of Obama, circa 2008, never bothered to ask was, “Change from what, to what?”

We’re finding out now, aren’t we?

You seem to be confusing iran with greece or spain,the unemployment rate in iran is 11.2%
http://www.tradingeconomics.com/iran/unemployment-rate

Melle masabi types are the most filthy sorts in Iranian society.

Long rant.But still those figures come from IRI sources.
Look it up!