Early Humans in Iran Were Growing Wheat 12,000 Years Ago 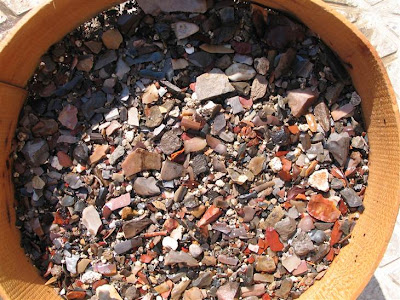 “A detailed history of plant cultivation gleaned from sediments at the Chogha Golan site in Iran suggest that the eastern section of the Fertile Crescent was as active as better known sites in the west,” the NBC report said. Chogha Golan is in Iran’s Zagros Mountains.

A group of scientists present their findings of ancient lentils, wheat, barley and pea grass in the Thursday issue of Science.

“If you get a seed or two you'd be happy,” said Nicolas Conrad, an archaeologist at the University of Tubingen in Germany, and a member of the archeological research team. “But at Chogha Golan, with one bucket we'd get a handful of material,” he added. (NBC News, 4 July)

Photo credit: Stone tools and clay artifacts were collected from a site in the Zagros Mountains in Iran, where humans were cultivating plants 12,000 years ago.(ISARP/University of Tübingen/NBC News)
Posted by Nader Uskowi at 7:20 PM

Without sounding chauvinistic, no people in the world have contributed more to humanity, human development, sciences, medicine, agriculture, and overall civilization than the Iranians/Persians and their ancestors. We are lucky to be the heirs to the greatest civilization on earth. IRAN PAYENDEBAD.

Likewise, Sumerians in Iran and elsewhere do not belong to the above groups, nor Semites, as well.

Present day nationalists are fond of associating such with modern incarnations or even historical ties to such but really the association appears limited to that of geographic location based on evidence at hand.

But we all know that people living in a country are decedents of the original people living there. later emigrations just add to the gene poll.

Anon, in this case that can't be discerned from the available evidence and remains speculative on your part. Much goes on in 12,000 years. The current borders of Iran are relatively new and have changed much in just the last 2500 years..

I'd also like to point out that populations at around 12,000 years ago can't be considered as "early humans." Anatomically modern humans are estimated to occur in the fossil record about 195,000 years ago, with older renderings of humans taking shape in the millions of years ago.

My point being that this should be considered a human (not Iranian) development that's been discovered within Iran's present boundaries.

MARK- you are just honest and sound informed ! though i may not buy your argument!.

It is possible that there are modern day descendants of these people living in iran today but you would need to do genetic studies to prove or disprove this,there was study done in a british community that showed that a 9,000 year old skeleton found in the local caves had modern day descendants living in the local community
http://www.freerepublic.com/focus/f-news/1549589/posts

I don't agree as I said later emigrations can't change the genetic poll all together just update it. look at "Guns, Germs and steel" for a scientific discussion of the issue.