In mainstream media reporting, the two indicators near exclusively cited for Iran's economy are inflation and oil export figures. Below are a few more economic indicators (and projections) provided to give a slightly fuller picture: 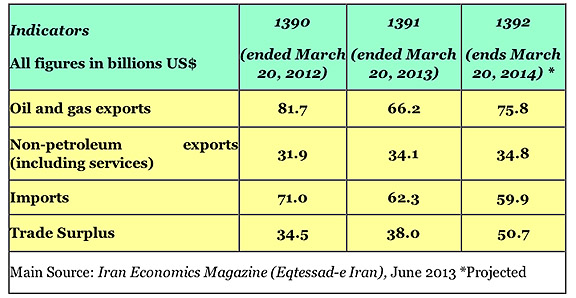 -Growing gas and gas condensate exports will be the main factor behind the growth of petroleum exports in the current Iranian calendar year.

-Based on the latest statistics from the Iran Customs Administration, in the first three months of the current Iranian calendar year, which began on March 21, 2013, the value of Iran’s non-oil exports reached $7.7 billion while the value of imports stood at $9.4 million, i.e., a quarterly non-oil trade deficit of $1.7 billion.

-Taking into account the oil and gas exports, the country [will be] producing a healthy trade surplus. Though severe banking sanctions have impeded the repatriation of export revenues, Iran will develop new mechanisms to repatriate these funds and to boost its economy.

Source: Iran's Pivot to the East by Bijan Khajehpour for Al-Monitor Iran Pulse. For additional commentary, click HERE.
Posted by Mark Pyruz at 1:17 AM

Here are some comparative indicators vis as vis the US deadbeat stasi state from the US media no less: COMMUNISM DESTROYED USSR- ZIONISM IS DESTROYING USA

It's time that America comes to understand that many of the nation's biggest disparities, from education and life expectancy to poverty, are increasingly due to economic class position," said William Julius Wilson, a Harvard professor who specializes in race and poverty. He noted that despite continuing economic difficulties, minorities have more optimism about the future after Obama's election, while struggling whites do not.

"There is the real possibility that white alienation will increase if steps are not taken to highlight and address inequality on a broad front," Wilson said.

Nationwide, the count of America's poor remains stuck at a record number: 46.2 million, or 15 percent of the population, due in part to lingering high unemployment following the recession. While poverty rates for blacks and Hispanics are nearly three times higher, by absolute numbers the predominant face of the poor is white.

Some says that Zionists created and destroyed Soviet Union.
Apparently, after that, they have moved to the West.

All those numbers in the table deny that Mr. Ahmadinejad's terms have caused "deep" catastrophe in the Iranian economy.

Non-petroleum exports and trade surplus show continuing increases and decrease in petroleum revenues was not the previous government fault..

Inflation can be quashed in not too distant period of time, because it was cause by artificial influences and lack of proper cooperation from other branches of the Iranian political system.

Those who criticize Ahmadinejad, had tried to obstruct his economical policies, where one of the examples cold be a strike of Bazaaris against a taxation...

Correct, all the so-called "leaders" of Bolshevism, Communism and Trotskyites were all Zionist Jews, so are founders of Feminism, Lesbianism and Gayism. The Khazar tribes of roving plundering Jews have been fleecing the Europeans for centuries from even Shakespearean Shylock and Gold merchants. The word "Jew-elry" comes from the Jewish lust for Gold and many of their names are associated with GOLD. Only after Islam's advent the Khazar tribes ran into problems and hence their eternal animosity against Muslims since Islam is diametrically opposed to Jewish practice of usury (interest and money lending)and other bankster frauds.

Also these "modern social" movements like Feminism, lesbianism and Gayism are convenient and insidious ways of breaking up the family unit and gender roles and the the sheeple are easy to manipulate via media and Hollywood.

Muslim world is more conservative and family centered so the Zionists are having a hard time in Iran and the Middle-East with the color coded "Arab Springs" not working out the way they would like.

The author of this blog accidentally forgot to mention a few other points from this article:

"The fact is that many businesspeople and government officials are not happy about the growing presence of Asian companies and products in the Iranian market. They argue that the lower quality of such products will increase the actual cost to the Iranian economy and believe that Iran should look for ways to reintroduce imports from the more developed economies."

Unemployed Mark, if iran is doing well why do you refuse to move there?

P.S. your monthly u.s. government assistance check is in the mail. You're welcome.

You mean where you choose to live and where millions of iranians dream of living?

This is the state of the economy reported by Mehr News Agency after 8 years of Ahmaghi-nejad's term:

Funny how these hypocrites and loony bin Islamists praise the Islamic regime while they are lording it in the West.What I like to know is why are they living in the "dead beat US" and not in Iran or any other god forsaken thired world country like North Korea or Cuba? And by the way I am Iranian and am totaly against the religious and bigoted dictatorship occupying Iranian soil.

Thanks for info but lets not forget that it is not Ahmadinejad who is only the messenger boy of Khamenei but the whole edifice of the regime that has destroyed the economy and the country.

Anon 5:40PM
Because they have been seduced to the West by false pretenses' propaganda, and after comparing realities, they speak their final conclusions and views...

There are usually less dissidents in societes, and they take less comfortable way of life than majority of their societes.
Like history shows those "majorities" are subdued and bribed by totalitarian entities (examples: Hitler's Germany and etc...)to support those regimes.

In Iran you can leave and come back on condition you are not a paid foreign agent. In the West they may sanction not only you, but also your friends (countries)....
The other difference between Iran and the Imperialistic countries is that they meddle in other countries' matters and use double standards in dealing with other countries.

And finally, what do you mean by dictatorship?
Is that that when you criticize Zionism and its servants they have the right to retaliate against you?

Is that an equality, that Zionists are allowed to ridicule other religions, and whoever makes negative comments about their religion, then he/she has to ..."shut down"?.

Is this part and parcel of the IRI's favorable economic picture: oil for subway cars? Next stop: oil for Chinese takeout:

Thank you for your comment. Agree, Just mentioned his name as it was in the original report by "Mehr" News Agency.

I have a suggestion for everyone who do not agree with Mark Pyrouz's rosy picture of the Iranian Economic / Political development in Iran.
Please stop ridiculing him or his remarks/ pictures of the constructions and development projects that he posts. Don't attack him personally. It just gives him more credibility and is not a democratic way to debate.
He is sitting in the Bay area and is getting his info. using the internet. There is a lot of information (Even withing the heavily censored IRI media) that disprove this rosy picture by Mark Pyrouz, like the one published by "Mehr" news Agency.
It is far more effective to use this available info. than personal attack on him or his followers.

You are right.There is no need to do personal attacks against Mark because he doesn't know any better and lives in fantasy.

The numbers don't add up. Look at the first column. Mark, no offence but where did you get your Ph.D. In mathematics?