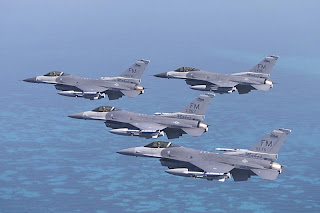 Iraq has signed a new contract to buy its second set of 18 F-16 fighters from the United States. The contract is part of a deal to purchase 36 F-16s. The first set of 18 jets will be delivered by September 2014, and the handover will be completed by 2018. (Reuters, 18 October)

It's funny back in 1977 Iran was one of the first countries which had ordered 300 F16s,the biggest purchase at that time.But non were delivered and instead some ended up in Israel.

I think you meant IrAQ and Not Iran. Change the following text Iran has signed....... into Iraq has signed .....

wow, I'm glad that the lede was a a typo and not an indication that I was hallucinating.

There had been some intrigue over Maliki possibly purchasing MiG-29s during his recent talks with Putin. Whatever the case, it will be interesting to see these F-16 deliveries finally materialize on Iraqi soil. It wouldn't even surprise me to see certain sections of Iran's military privately hoping they do, the planes being more capable and the American training so much better. And contrary to American expectations, Baghdad's security focus is not eastward but rather to the west, northwest and north.

Why does the US sell these weapons to its own enemy???

Just testing you guys :) Sorry for the typo and thanks to Mark for fixing it.

Iran needs these more than Iraq, and hope some day the Iranian air force can start it rebuild.

Iraq is not an enemy. You don’t need to be a puppet to be a friend.

Nader Uskowi,I agree we should rebuild our air force.
Even when the regime goes we must build our own aircraft with indigenous or borrowed and stolen technology.

From your words "Even when the regime goes...", do you mean that the Islamic Republic's AF should be rebuilt; during its existence, too?.

@anon 7:30
Why wouldn't we sell weapons to Iraq?
Is it better to spend a trillion dollar in Iraq and lose so many American lives in that war only to have Russia equip the Iraqi army and reap the financial and politicak benefits?

F16 are no threat to the US in the hands if the iraqis, and they are made by American labor who need these orders during this recession.

Iran hasn't got the funds to purchase advanced jets. They haven't aquired any additional jets since the early 90's ... Mig-29s from Russia and Chengdu J-7s from China (Mig-21 copy).

The Iranian Air Force has quite a number of jets though which includes a few types that never gets mentioned, not least the ones they recieved from Iraq during Operation Desert Storm in 1991, Mig-23s/Mig-25s/Su-22. They should explore if there is any worth to have them upgraded by Russia.

Iran has the funds to purchase advanced jets, and would make the purchases if only anyone who builds advanced aircraft was willing to sell them to the Iranian regime.

The North Korea has the same types of aircrafts and spare parts...

Iran is also working on an improved version of the Saegeh and...decoys.

What do you mean by your words that
"..certain section of Iran's military privately hoping they do..."