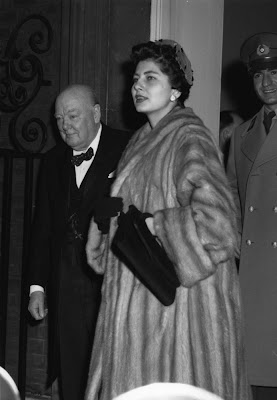 The Shah of Iran and Queen Soraya with Sir Winston Churchill leaving No 10 Downing Street, 1954.

Queen Soraya represented Iranian mystery elegance and beauty,all rolled into one.
Of course I remember very well all the ladies in my childhood.How they were so elegant confident and beautiful.
Even today Iranian ladies try to look their best,despite the restrictions imposed on their personal freedoms.Unfortunately yet again it boils down to this regime who wishes Iranian ladies to be invisible under a black shroud and chained back of the kitchen.
But Iranian ladies are much more powerful than they think and will teach those people a lesson they will never forget!

My first thought was "what a nice photo", my second thought was I wonder how cold it was that day.
As a self proclaimed feminist, I wish government would simply stay out of women's business, i.e. dress code.

The shah had no right outlawing certain forms of dress code, just as the Islamic republic has no right taking over for God here on earth by regulating morality to the extreme. Even in the strictest interpretations of Islamic dress code, no where does it say that the government must force people to be pious. That would be fake morality enforced by law.

People should be free to live their lives so long as they don't hurt anyone. If there is a judgment day then it's their judgment day and not the judgment day of the rulers or the Islamic republic.

On the right we shouldn't judge a women who chooses hijab as a backward person, and on the left we should not be afraid of moral decay just because a women doesn't chose to wear hejab. The non-mulsim world, with a few exceptions, has come to accept both choices by Muslim women in heir societies, so why can't we.

But I do fully agree about what you said regarding their judgment day.

@anon 4:16
I stand corrected. You are correct. Reza shah and ataturk both decided around the same time that they needed to discard the eastern image and embrace a western image and force their nation to dress differently.

You may agree however, that we didn't see any diversity in the dress code in National TV presenters, or govnment female officials even in the time of the late Mohammad reza shah.

Hijab should be ok if a women choses to wear it on national television or in college etc. I would assume that women interested in public office or publically visible jobs, like TV, would wear their hijab elegantly, in case some of us are too worried about image or "abbero" of he nation.

The irony is that allowing hijab to be mainstream actually opens the doors for many disadvantaged women who would face resistance from their male dominated immediate circle if they were to try to venture outside their homes to seek education or work if they weren't their hijab.

Happier times for whom? If you supported an English PM well known for his racism toward Middle Easterners and South Asians, and accepted colonialism or foreign imposed dictatorships on your home country, then Churchill's your man.

From my father's side of the family perspective, the pre-1941 foreign military invasion and occupation of Iran were "happier times".

1954 Iran was a happier place than in 2012, less angry, less uptight, less sloganeering…

This blogger knows a thing or two about racism, colonialism and dictatorship, and the struggle for freedom. This photo was not meant to offer analysis on those issues. Relax!

Wasn't "happier times" for everyone. What a moron thing to say...

I share Mark Pyruz's sentiment. You could have picked a better photo without this despicable man who once called Iranian oil "a prize from fairyland beyond our wildest dreams."

You're right,it wasn't happy times for mullahs and their morons.


I would say that everybody knows by now that Khomeini and those mullahs are the true servants of oil cartel and imperialism.
Look up the Shah's speech made in 1973 regarding oil policy for 1979.
And what resulted afterwards with CIA and MI6 coup of 1979 and the installation of the mullahcracy.

But,I know I'm wasting my time with deadbeats like you because your head is full of Gatch!

I find it sad and amusing that anyone would have a negative point of view on Nader's posting of this picture.

The image of a beautiful young queen is a happier and much more positive image of Iran, especially when contrasted to the image of Ahmadinejad, in both looks and personality.

Happier times will hopefully return when millions of Iranians inside Iran will be free again, and millions in exile will be free to visit and enjoy a free Iran.

What a wonderful and patriotic answer that was.

And I genuinely mean that.

And I have thought that Mr. Fazeli is just interested to accept monarchists only to the point where they will coordinate with him (or people with a similar demeanour) a coup or the war against the Islamic Republic, but comment at 6:06PM suggests the opposite way...

What does it mean that you describe yourself as a feminist- are you a woman?

Monarchism has its roots in the Patron and subject mentality.

A subject is equal to a Royalist otherwords being a servant of a Patron or a master.

A King/Queen or Shah or whatever are the utmost Patrons and masters and those who want them are by nature servants.

@non 3:17
If i were a women named Jabbar that would make me transgender, not that there anything wrong with that.

Feminist is someone who supports feminism, which in turn means "the theory of the political, economic, and social equality of the sexes" according to Webster.

As for my alliance or differences with loyalist Iranians, I believe that people could hold different views and yet be able to have mutual respect and have some things in common, like wanting a regime change and freedom in Iran.

Feminism is the opposite of Chauvinism

considering all "Isms" as wrong and being extreem or over the top,then one must conclude that the equality rehtoric is merely there to justify another "Ism"

But whatever, before your other you strats to curse and insult, I take it back and leave your nonsense for your other other you to applaud as a fine patriot.

According to you Feminism is the opposite to Chauvinism,wrong.

Chauvinism means excessive or prejudiced support or loyalty for ones cause or group.

Feminism means advocacy of women's rights on the bases of equality of the sexes.

@anon 3:52
I think you just heard from my annonymous other half (thanks btw).
I have no further comment.